Additional photos of this 2009 Aprilia SXV550 are available here for your perusal.

Aprilia’s SXV550 was an absolute monster that journalists fell in love with as soon as it was released – Visor Down said “only nutters need apply“.

It’s a supermoto with a powerful V-Twin, excellent components, and race-bred pedigree: the bike had already won the S2 World Supermoto Championship as a prototype before it was released to the world. Unfortunately, early (2007) bikes had serious issues with the sealant used in the engine cases. If spotted quickly, you could reseal the motor and everything would be fine. If not, water would get into the oil and you’d be looking at a V-Twin paperweight. Thankfully, Aprilia had sorted it out by 2009, and customers were rewarded with a full-on race bike that was somehow street legal.

The Aprilia was a revolution in the world of supermoto, ditching the traditional single for a beefy V-Twin that popped out a staggering 70 horsepower at 10,500 rpm for a bike that weighed about 280 pounds! MCN said it was “going to change the way the world thinks about supermotos forever.”

The trade-off was service intervals, as the race maintenance schedule called for new pistons and a shim check after 60 hours. Regular street riding would increase that number by several factors, however. What else would you expect from a race bike with lights?

This SXV (VIN: ZD4VSU5199S000027) started life in Aprilia’s traveling fleet of test bikes for motorcycle shows across the country. At one of the events, a potential customer had a lowside on the left. We’ve included several photos showing the cosmetic damage from the lowside – you’ll see damage to the left side of the front fender, headlight cowl, tank, and tail. None of this affects the mechanical performance of the machine, which is simply ludicrous.

The owner acquired it out of Aprilia’s test fleet, and it in has been in his possession for the last decade or so. He says that it’s a wonderful bike that he’s letting go to save himself from spending more money on it.

There are just 290 miles on the odometer. 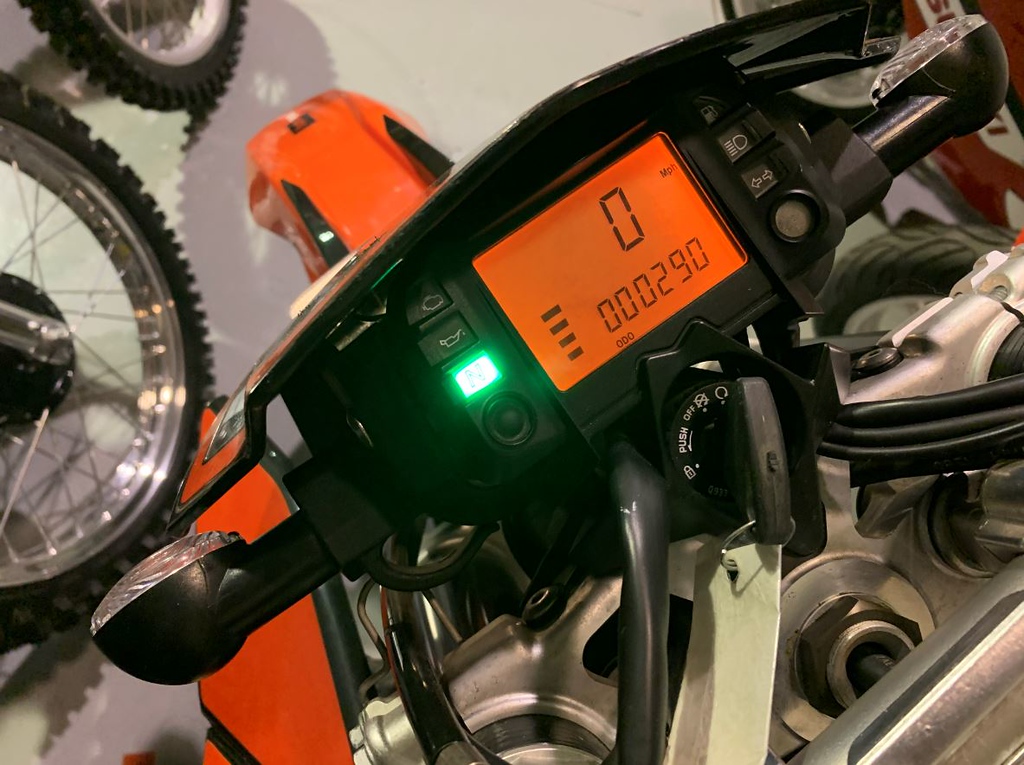 As an example of the owner’s investment, this SXV comes with parts from 50 Stunt such as the foot hoop (which bolts onto the subframe and allows you to put a foot down on the rear while doing a wheelie) as well as a Dual Caliper kit that includes a mounting bracket, 2-piston caliper, brake pads, banjo bolts, steel braided brake lines, and a Magura 13mm radial master cylinder.

Equipped with an Akrapovic exhaust (as if this bike needed any more horsepower), this SXV is ready for you to terrorize the streets or your local supermoto track with.