Additional photos of this 2011 Ducati D16GP MotoGP racer are available here for your perusal. 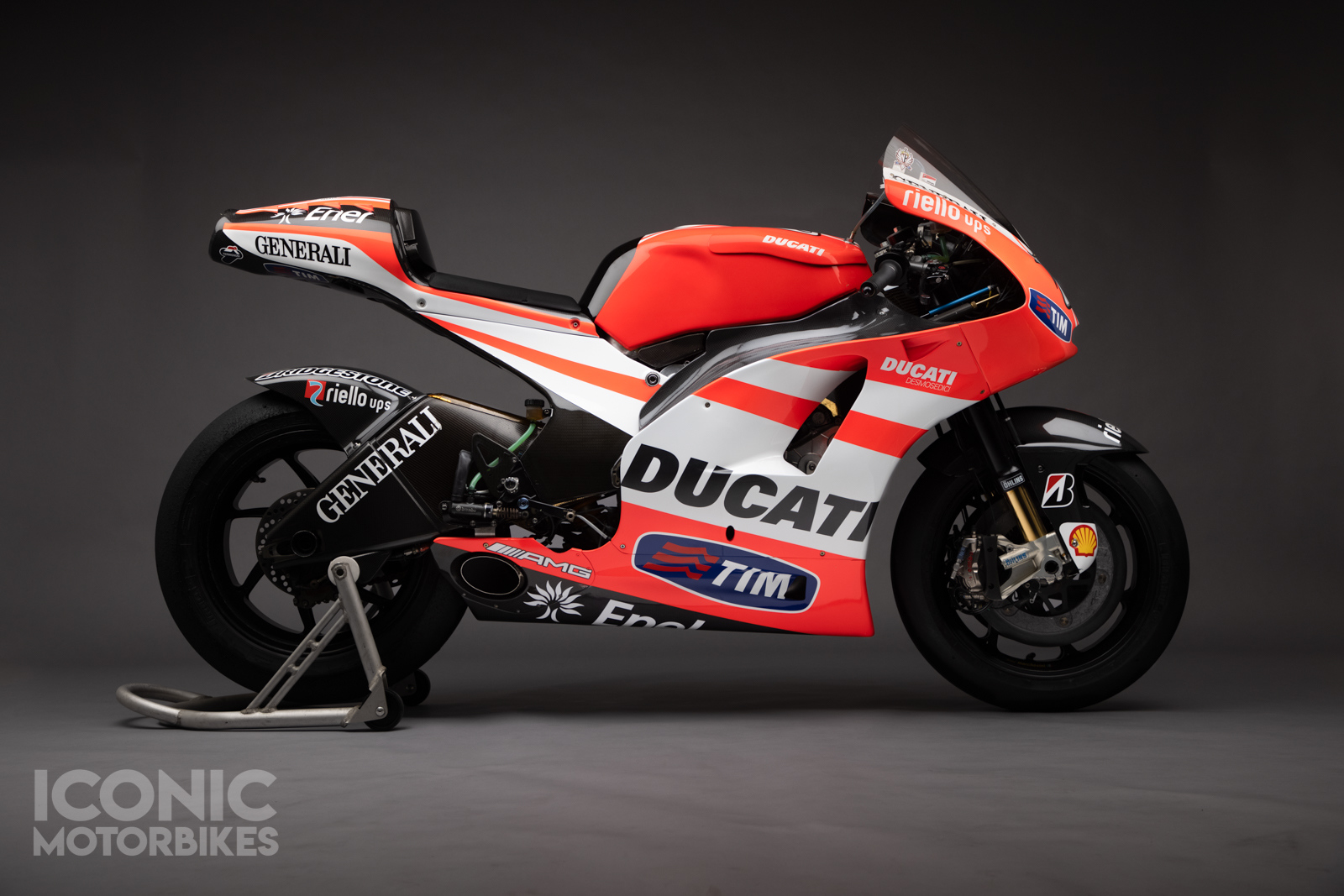 For the 2011 MotoGP season, Ducati made headlines by bringing Valentino Rossi on board to ride the GP11 – the last year of the 800cc engine. Rossi joined his former Honda teammate, Nicky Hayden. Rossi would go on to finish seventh that year, while Hayden was right behind him at eighth overall. Ducati also supported two satellite teams with a total of four riders: Karel Abraham, Hector Barbera, Loris Capirossi, and Randy de Puniet.

It was the pinnacle of what Ducati was able to build at the time, with a staggering amount of technology in all of the bodywork and components. 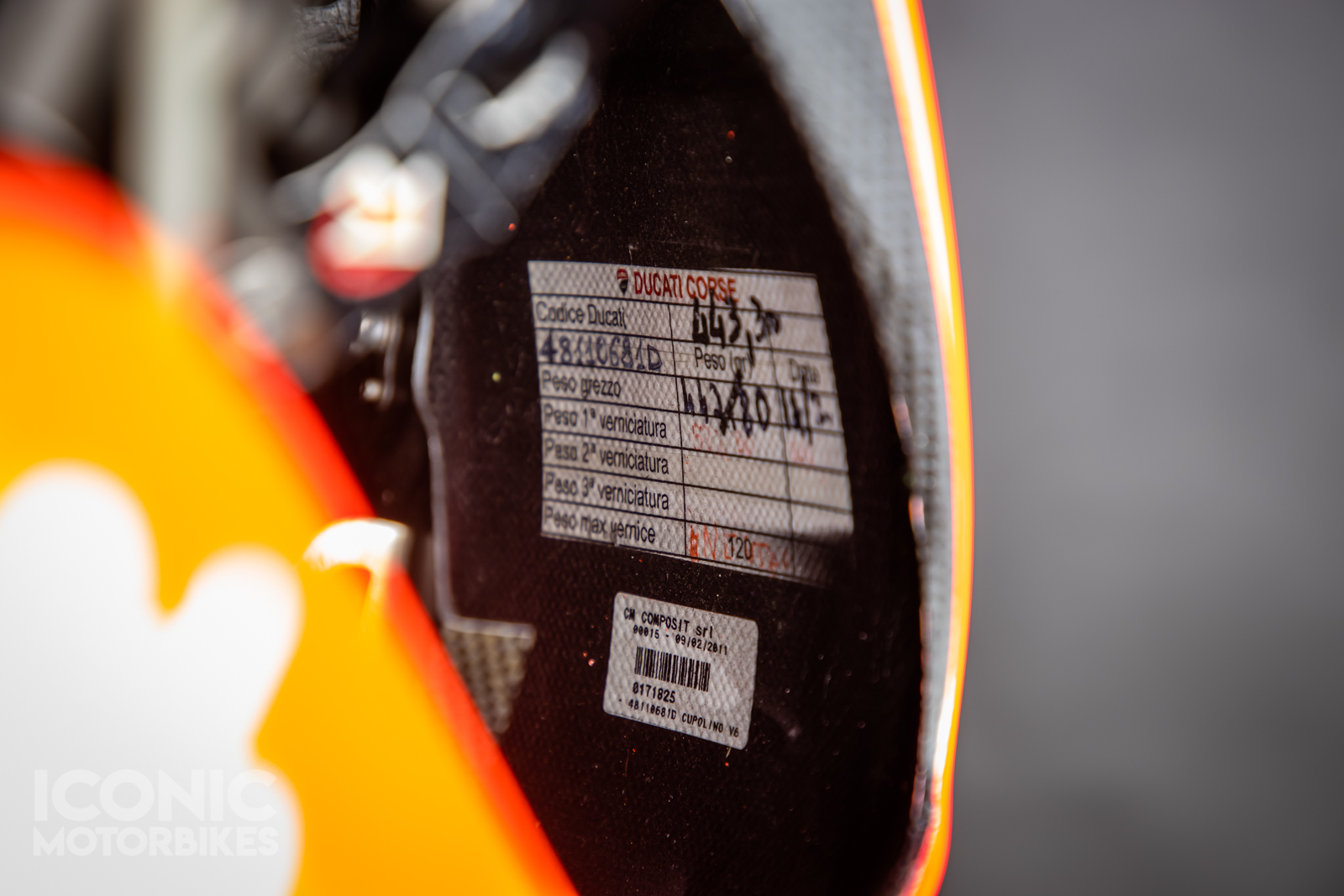 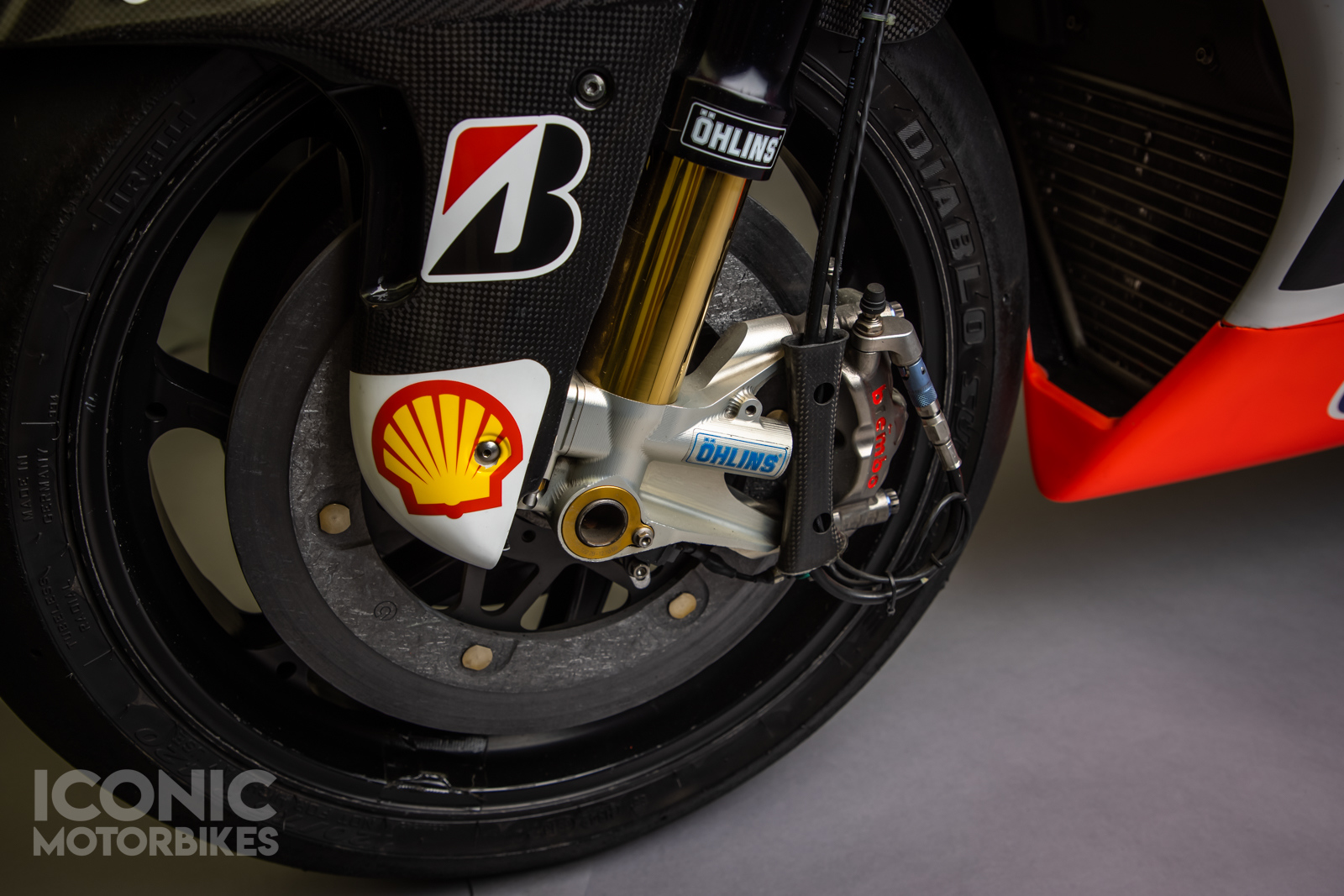 Opportunities for the public to acquire retired MotoGP race bikes are exceedingly rare. Ducati Corse made two of Nicky’s GP11 bikes available to the public – one is in England, the other is in Italy. They also had two show bikes for events built from satellite team bikes. Based on our research, we believe this listing is comprised of the frame and components from Randy de Puniet of satellite team Pramac Ducati (VIN: D16GP11-RD1). It was rebranded VIN: D16GP030 and used as a show/display bike during the 2013 season, having been repainted in Nicky Hayden’s 2013 livery. Both show bikes were sold to a private party in Southern California in 2014 – the one featured today and another in Rossi’s livery. 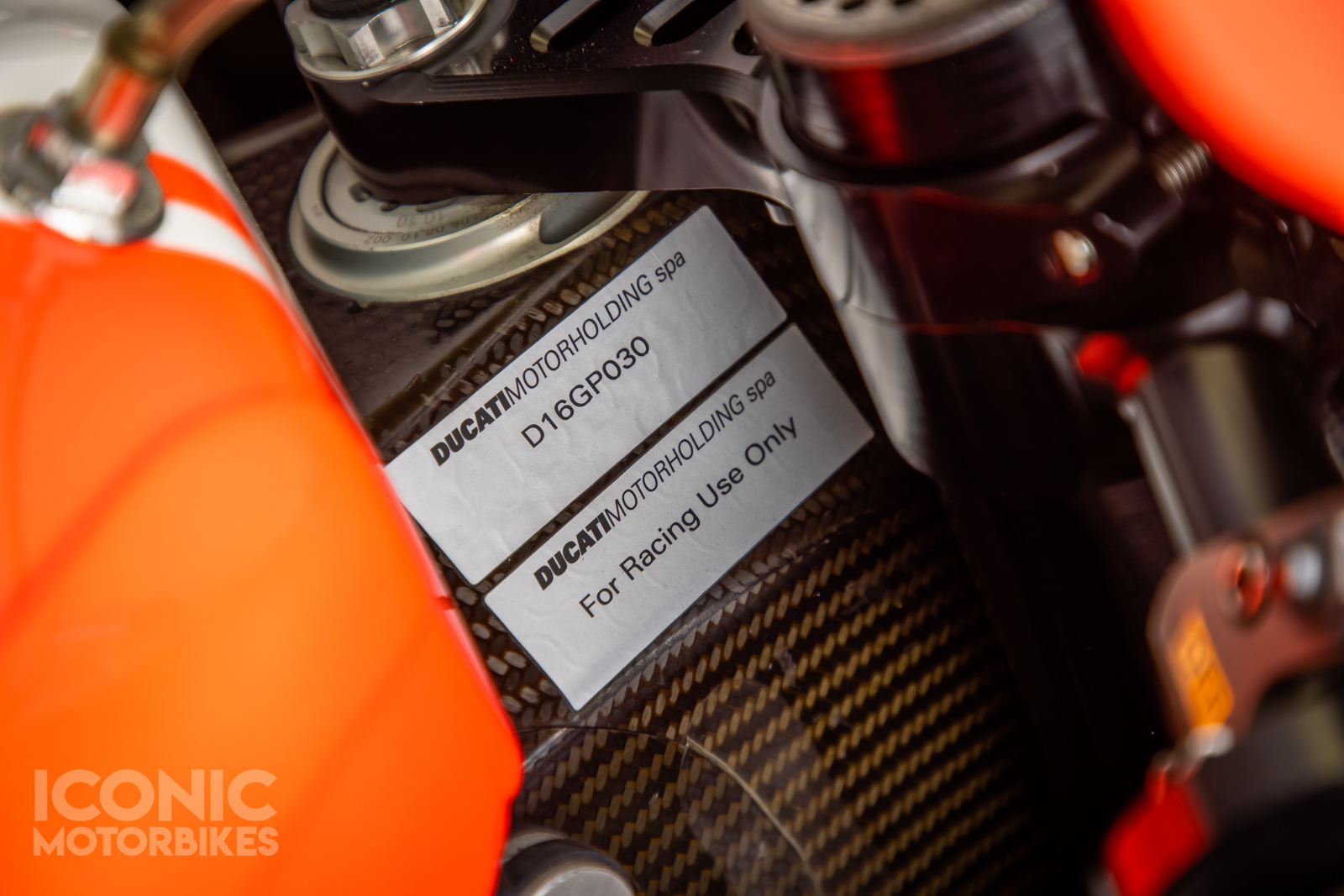 In other words, while Nicky Hayden did not race this motorcycle, it is a genuine MotoGP Ducati race bike that bears Nicky’s livery from the 2011 season. As Ducati Corse themselves put it in the sales agreement, this “is a unique bike which has been used in a very stressful and intensive way by a professional rider during a World championship and always under the strict control of Ducati technicians.”

The current owner acquired it in 2014. As you can imagine, there were several questions about this incredible motorcycle before we went live with it. The previous owner’s contact at Ducati Corse clarified the following for us:

The engine is supposed to redline at 20,000 RPM, and when raced the redline would have been bumped to 22,000 RPM. The sister bike to this is restricted to 17,000 rpm, but this bike has not been revved that high so the current redline is not known. 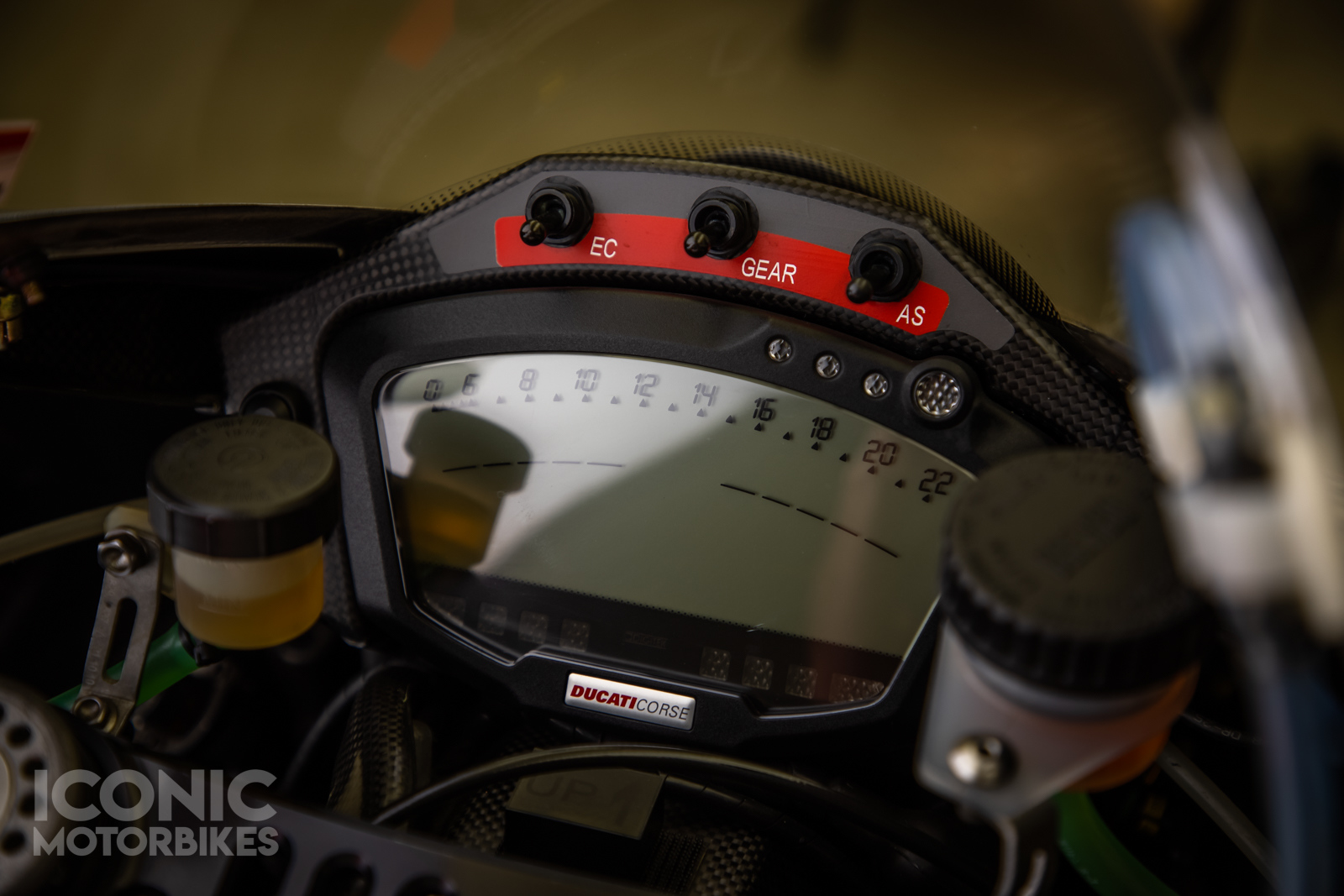 Ducati says that the motors are usually good for approximately 2,000 kilometers (~1,250 miles) before needing a rebuild. The first owner had the engine borescoped by John Ethell of JETT Tuning, who noted that the tops of the pistons were shiny and the engine was barely run, if at all. 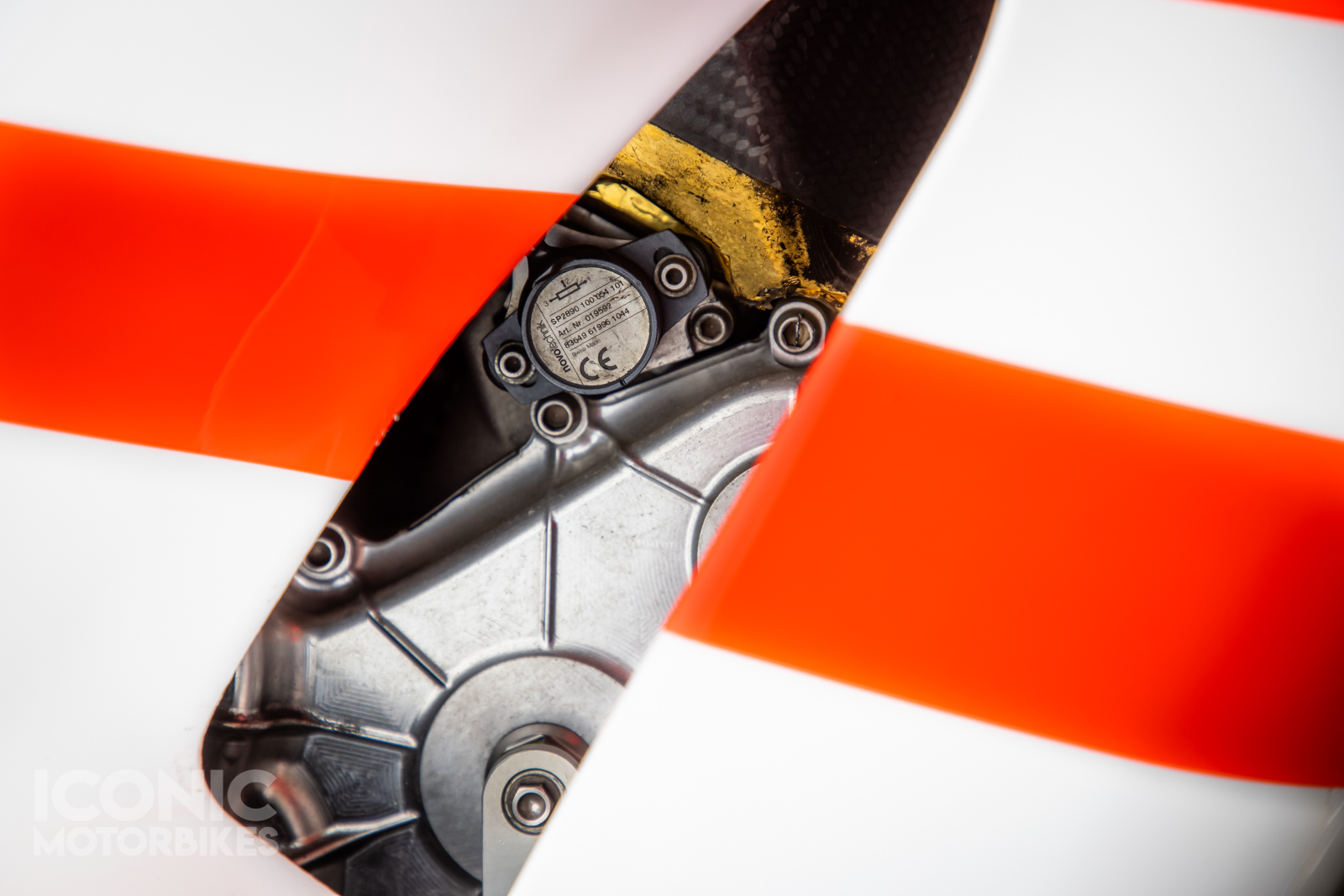 The only people who have ridden it are the owner, Steve Rapp, Larry Pegram, and Prince Oliver (adopted son of Zsa Zsa Gabor). The bike was ridden at events at Buttonwillow Raceway and Miller Motorsports Park and it has approximately 80-90 miles on it. Larry Pegram and Steve Rapp are the only two people who have ridden both this and the sister bike – Pegram preferred this one. 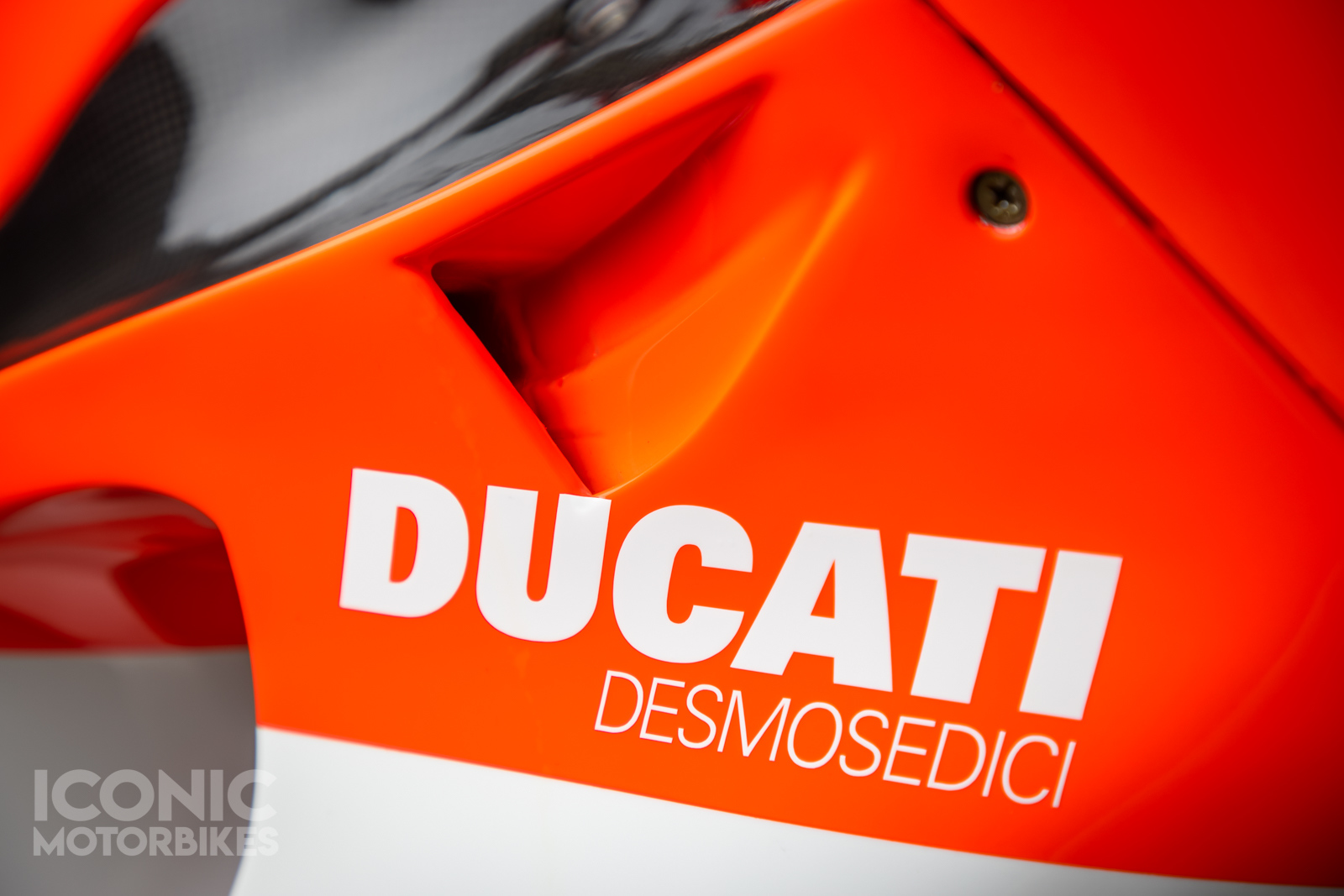 It is equipped with the GPS antenna, camera antenna, and telemetry. 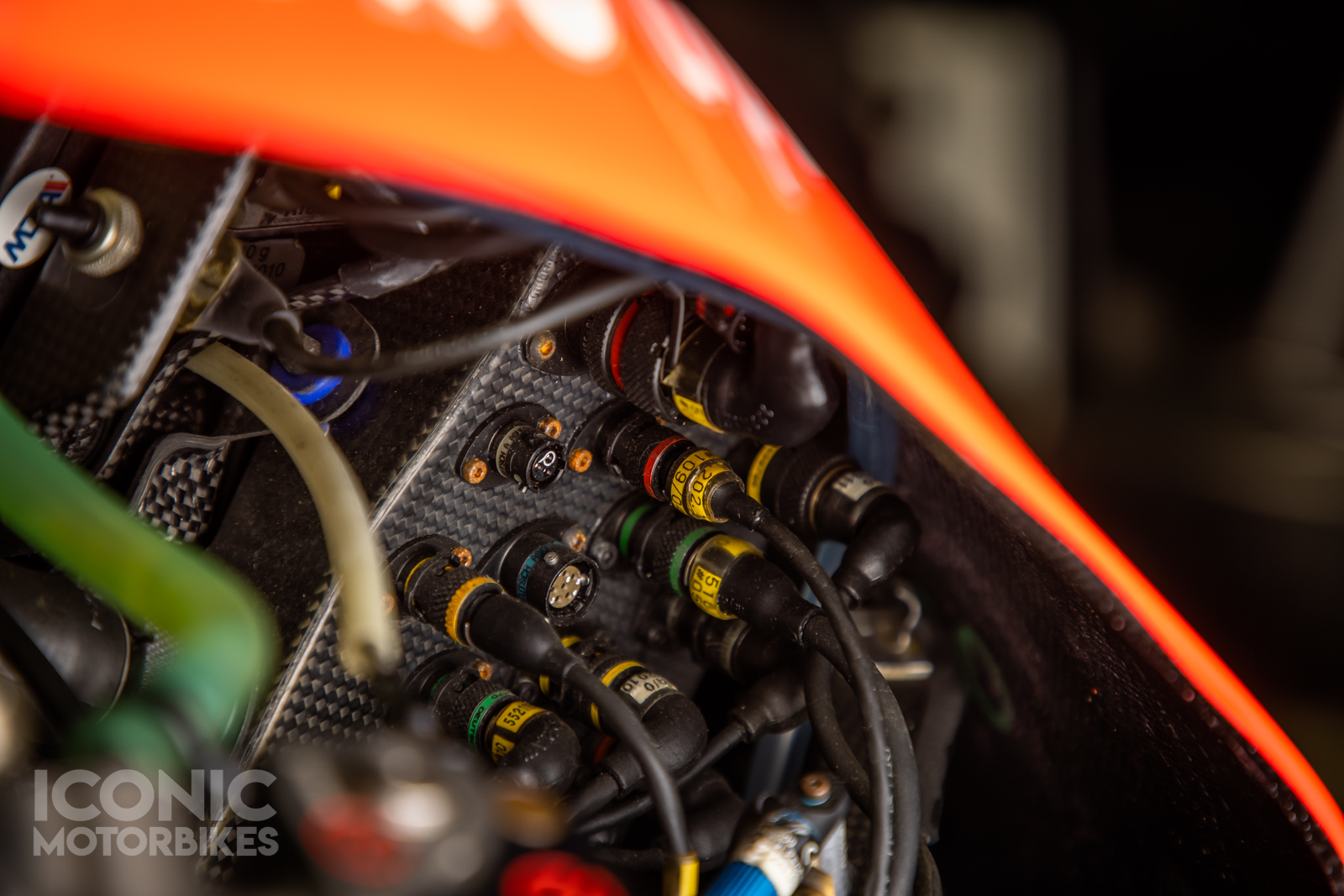 The sale does not include a starter, which is required to fire up this machine. The original owner is willing to help with the setup if the new owner would like to build one – he notes that it 24V battery that requires very low amperage to ensure that it does not fry the electrical system. 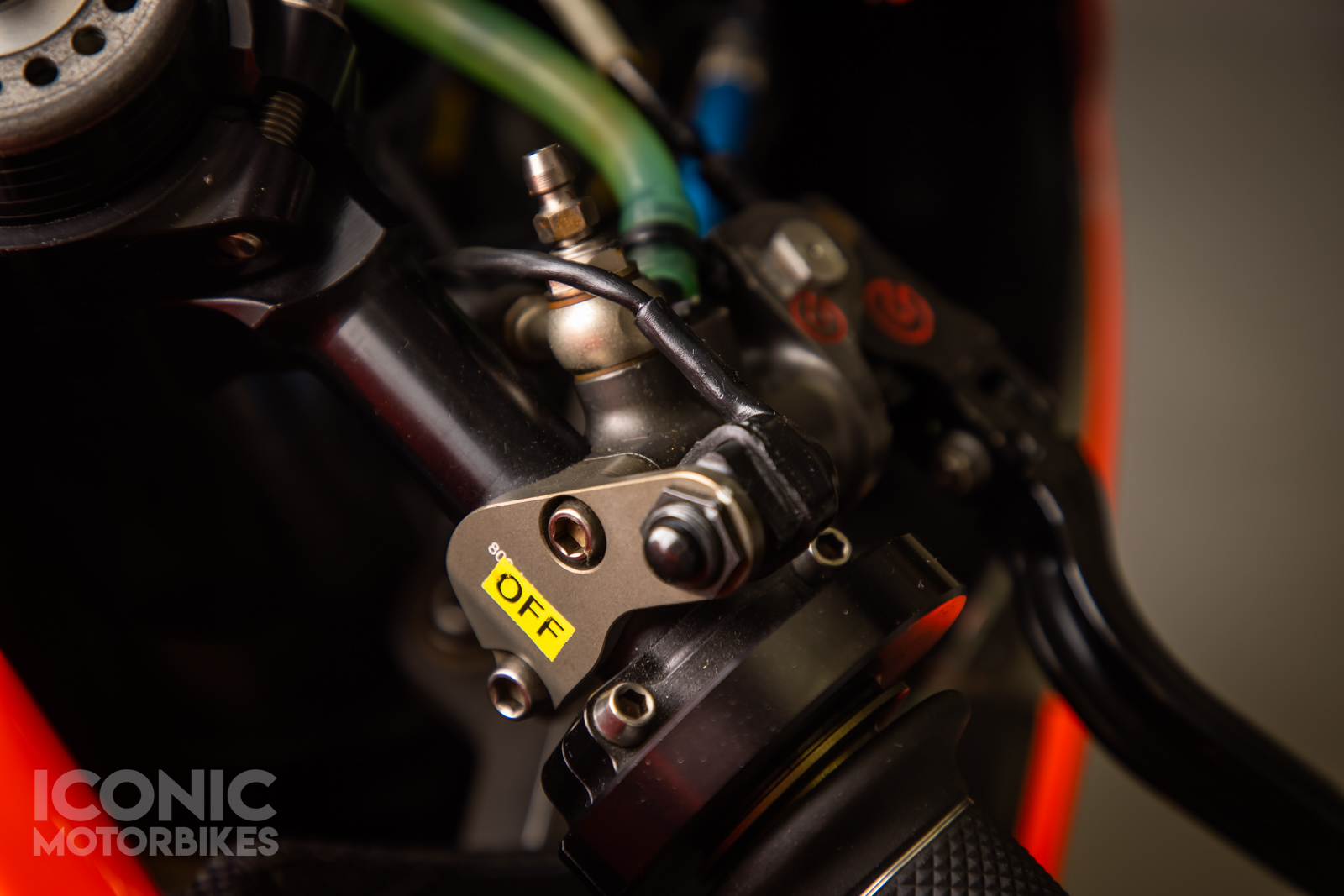 Per the original owner’s agreement with Ducati, this bike is allowed to be sold “as an antique for mere collection purposes.” The auction winner will be required to provide a written commitment to the current owner of certain obligations to Ducati (such as not riding it or only having Ducati maintain it) – a copy of the agreement with all details will be provided to the winner. 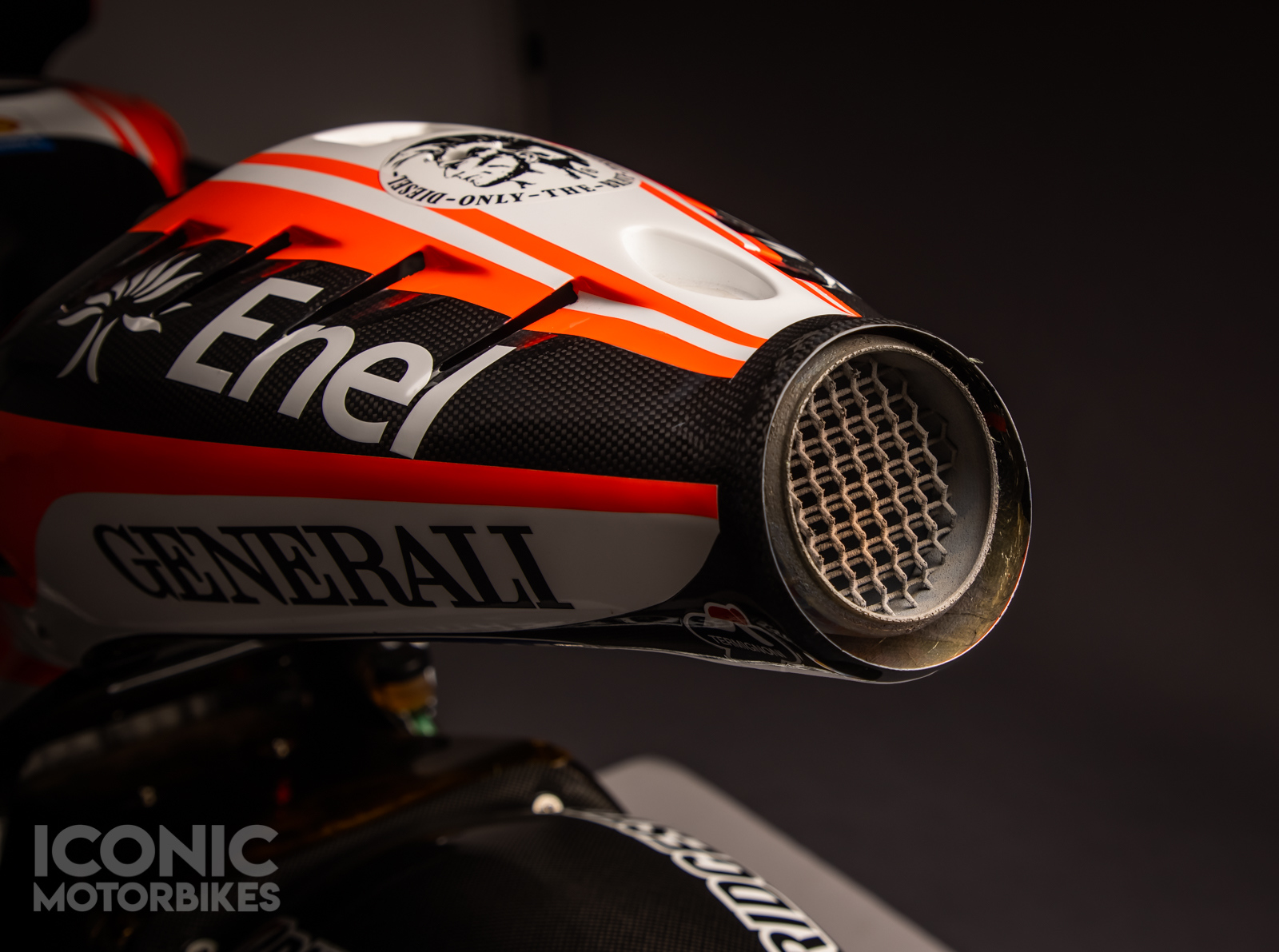 The sale includes an additional set of 16.5″ Pirelli tires. 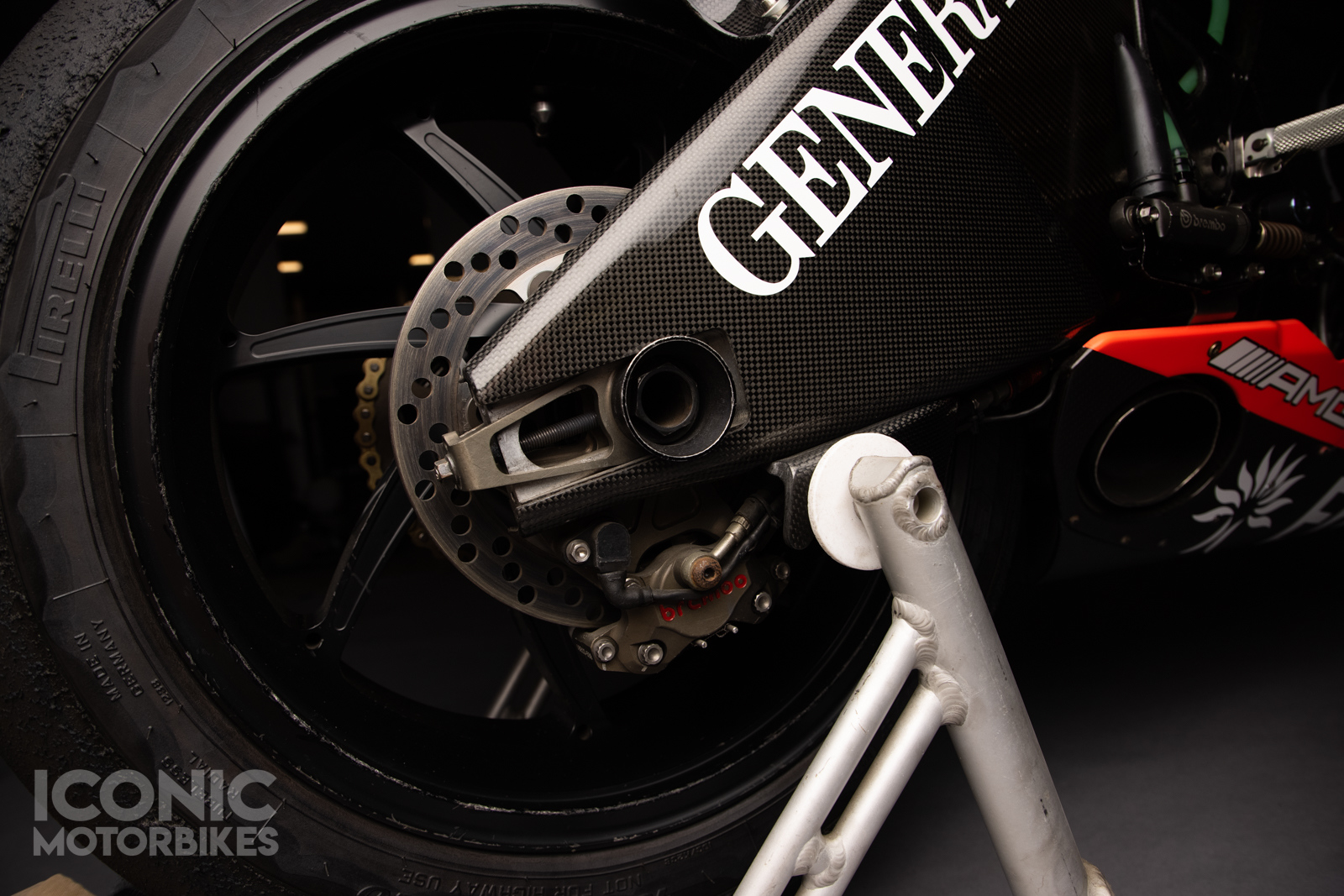 We’re honored to offer up such a rare opportunity for Ducati fans and as always, we thank you for your support in making it happen. Nathan May shot photos for this listing, and to give back we’re offering prints (profile / head-on). All profits from the sale of these prints will be donated to the Nicky Hayden Memorial Foundation!

2/2/21 Update: we just heard back from a Ducati Corse source in Bologna, and this is what he had to say:
“This GP11 is a real race bike used by one of Ducati’s satellite teams in 2011. We never sell bikes built out of parts. I am not 100% sure, but if I remember correctly it was one of Randy De Puniet’s bikes from Pramac Racing Team. We sold it to a US collector in July 2014 and it was perfectly functional.

For your information, all of the GP11s from satellite teams were returned to Ducati at the end of the 2011 racing season and in 2012 where [sic] dressed either with Nicky’s or Valentino’s fairings, to be used for show purposes for our sponsors. When in 2014 we decided to sell them, they still had those fairings on. Naturally we made it very clear to the different purchasers, and wrote it on the sales contract, that those bikes were satellite GP11s in origin, used by XX rider in 2011 for XX team (and not by the Factory Team).”

Have any Nicky Hayden stories or questions about this listing? Let us know in the comments!