Additional photos of this Ducati Monster 796 are available here for your perusal. 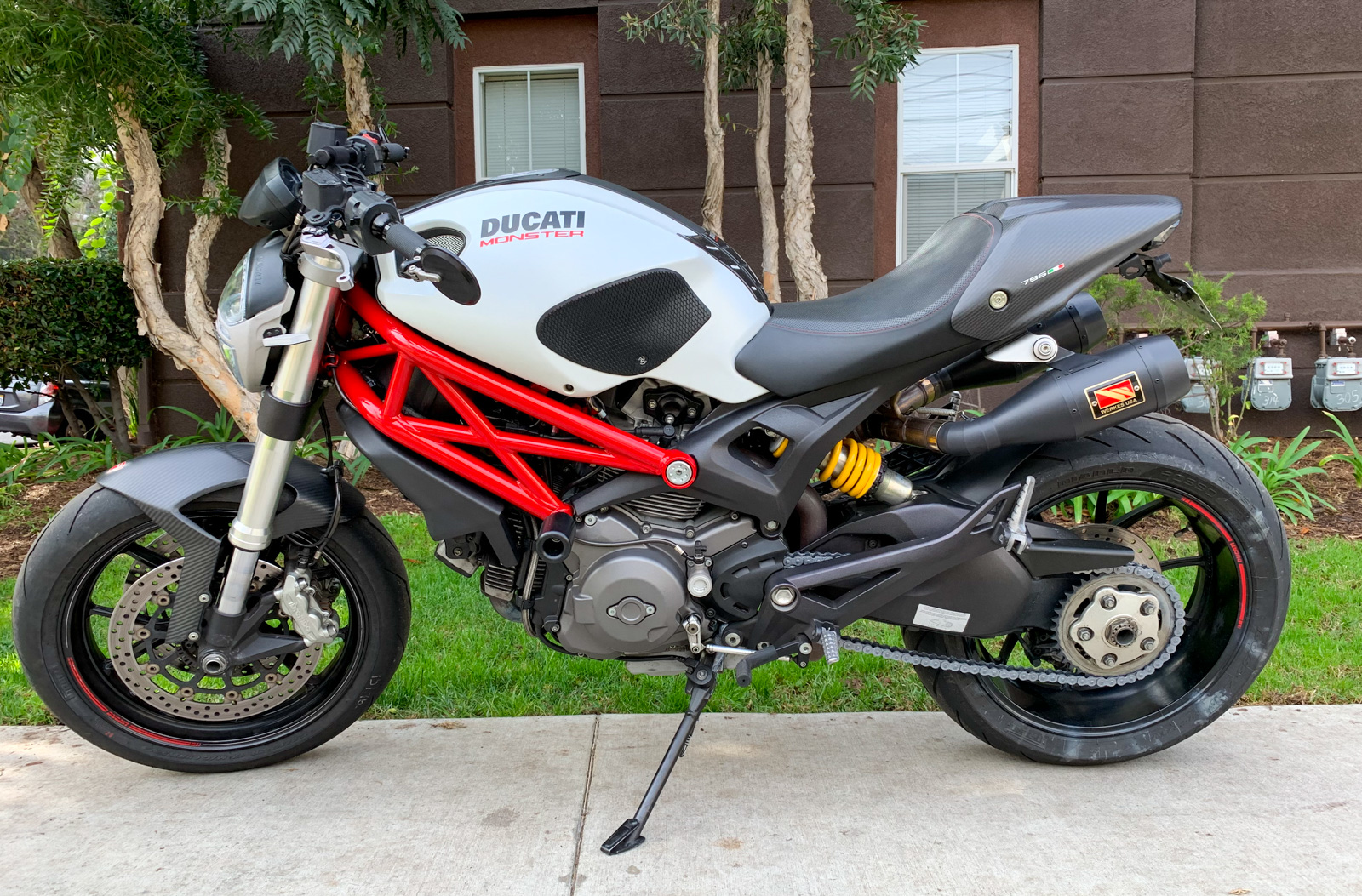 In 1926 Antonio Cavalieri Ducati and his three sons, Adriano, Marcello, and Bruno Cavalieri Ducati founded Società Scientifica Radio Brevetti Ducati in Bologna to produce vacuum tubes, condensers and other radio components. In 1935 they had become successful enough to enable construction of a new factory in the Borgo Panigale area of the city. In 1950, after more than 200,000 Cucciolos had been sold, in collaboration with SIATA, the Ducati firm finally offered its own Cucciolo-based motorcycle. In the 1960s, Ducati earned its place in motorcycling history by producing the fastest 250cc road bike then available, the Mach 1. In the 1970s, Ducati began producing large-displacement V-twin motorcycles and in 1973, released a V-twin with the trademarked desmodromic valve design.

The Ducati Monster was born in 1993, designed by Miguel Angel Galluzzi. It is a naked bike, characterized by an exposed engine and frame. The trellis frame in the Ducati Monster is an integral part of the motorcycle’s design, allowing for both aesthetic appeal and for structural efficiency. The Monster line has had numerous variations over the years, from entry-level 400 cc bikes up to top of the line 160 hp multivalve, water-cooled superbike-engined versions, with as many as nine different Monster versions in a single model year.

For many lovers of the Ducati Monster, there was a complaint that the 696 was too small and the 1100 was too large. To appease these lovers of the naked motorcycle, the Italian manufacturer released the Monster 796 in 2012. This new mid-weight Monster basically took the 796 desmo engine used in the Hypermotard and stuffed it into the 1100 Monster’s chassis.

This combination proved worthy to urban motorcyclists: the bike provides 87 horsepower in a 412 pound chassis (wet), and the styling was typical of Ducati’s famed naked lineup, such as the single-sided swing arm and exposed trellis frame. Powering the 796 is an 803cc L-Twin which features 11:1 compression ratio and a lightweight flywheel similar to the one in the 848 EVO, which helped to maximize power and torque. The 796 breathes through a Siemens electronic fuel-injection system, and a lightweight, 2-1-2 catalytic exhaust system that uses twin lambda probes and a regulating valve to provide finer fuel mapping.

The suspension is simple but tasteful. The Monster 796 uses 43mm Kayaba front forks, with a single-rear Sachs unit out back that features adjustable spring preload and return damping for passenger load optimization. Stopping the 796 are dual 320mm semi-floating discs gripped by four-piston Brembo calipers up front, with a 245mm disc squeezed by a Brembo two-piston caliper out back.

Another attribute to the optimal handling of the 2012 Ducati Monster 796 are the 17-inc, Y-shaped five-spoke wheels; not only are they for looks, but the lightweight aluminum wheels assist in unsprung weight, helping to optimize handling, braking and performance. The 2012 Ducati 796 features that balance needed for the rider who wants to thrash urban localities with comfortable ergonomics and asphalt-ripping power.

The only cosmetic flaw Sandro was able to identify is a small cluster of scratches on the frame.

The sale includes two keys and the Ducati code card.

This Monster 796 was accepted as a trade-in by our neighbors at Bartel’s Harley-Davidson, so the history is not well-known, but it runs well, presents well, and it just needs a new owner to keep enjoying it! 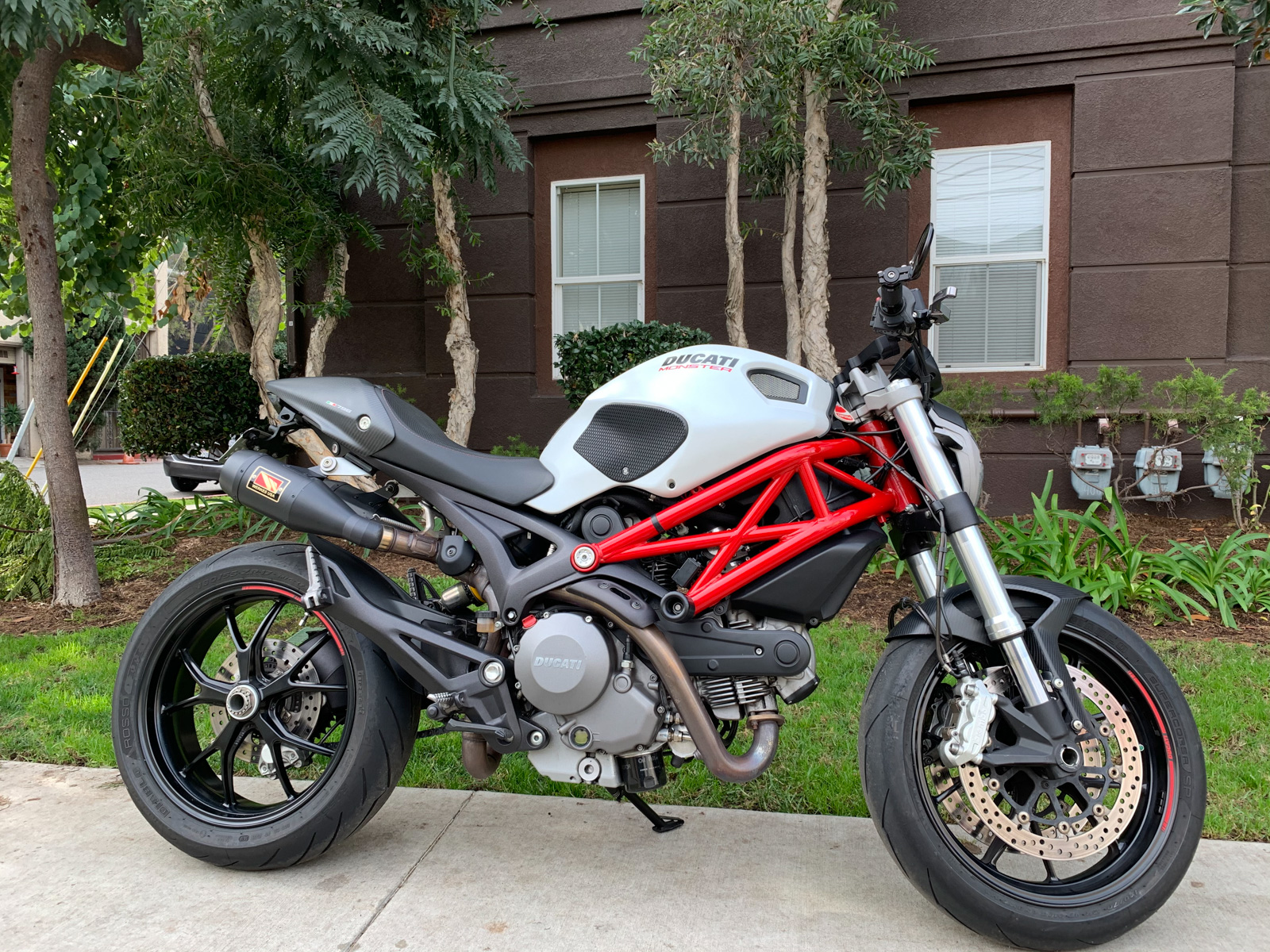