A full photo gallery for this Quadster is available here for your perusal. Please let us know if you require any additional photographs!

Grüter + Gut Motorrad Techniks is a Swiss company that produces exotic, high-end Quads and Trikes. After the success of the boutique brand’s BMW Boxer-powered “Quad” model, Grüter + Gut — or “GG” as they’re better known — opted to introduce a successor to the Swiss-made Bavarian-engined four-wheeler, known as the “Quadster”.

Like its BMW-powered predecessor, the Quadster is constructed around an advanced F1-style, machined aluminum chassis that’s been slightly stretched for greater stability. Each wheel gets its own adjustable independent suspension and aluminum trapezoid cross-members, and while the Quadster isn’t a leaning vehicle, it is nonetheless capable of pulling more than a G in cornering forces.

At the heart of the Quadster is the same liquid-cooled, 1,300cc, fuel-injected, 16V, DOHC, four-stroke, inline-four engine found in BMW’s K1300S sport-tourer. The Bavarian mill is good for 175hp and 103 ft-lbs of torque. The Quadster also borrows the K13’s gearbox, ECU, and display. Despite the Quadster weighing in at around 825 lbs dry, the exotic four-wheeler is can still pull off 0-60 mph runs in 3.5 seconds, and reach top-speeds of around 140 mph.

All that power is transmitted to the back wheels via a machined aluminum billet differential with a reverse gear that is separate from the Beemer’s six-speed gearbox. Considering the Quadster has bigger dimensions than a Smart Car — 56” W X 91” L — that reverse gear is a must. Though the clutch lever is found in its normal spot, the gears are changed via a toggle switch just above the front-brake lever on the right handlebar.

Each of the cast-aluminum wheels also gets its own 270mm full-floating discs and dual-piston caliper, capable of bringing the Quadster to a complete standstill from 60mph in under 100-feet. The front and rear brakes can be operated independently, like a normal motorcycle, though the bars also boast an extra thumb-activated rear-brake on the left side.

Produced by hand in incredibly small numbers, the construction on the Quadster is top-notch, as is its fit and finish. The Quadster continues the grand Swiss tradition of quality, precision, and craftsmanship. The sleek bodywork is designed and produced in-house, giving the Quadster an aggressive and sleek aesthetic. With its unique look and gobs of power on tap, it shouldn’t come as a surprise to learn that several celebrity riders including Michael Jordan, own their own GG Quadsters. 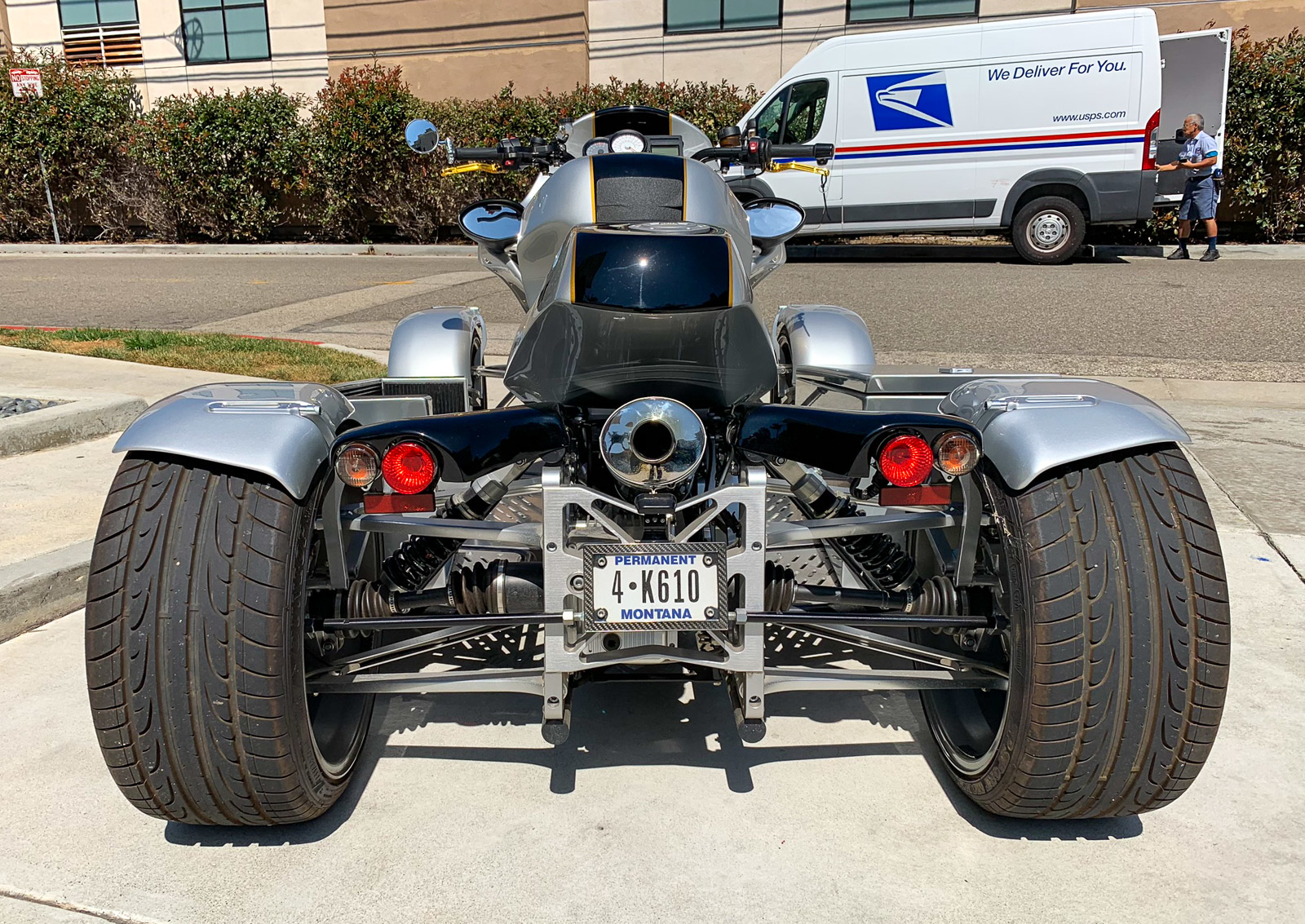 This particular 2013 GG Quadster has been bestowed with an array of upgraded componentry such as a limited slip differential, S.R. Performance Exhaust, Wilbers shocks, servo assist power steering, Works wheels, and heated grips, just to name a few. Several modifications (including the thumb brake and electric shifter) were implemented as the seller is in a wheelchair and needed some changes to make the Quadster rideable. In total, more than $80K has gone into this elite open-air four-wheeler. The specimen’s electric shifter and supplementary hand-control setup were built at the factory in Ballwil, Switzerland. And with only 1,745 miles on the clock, this 2013 example is in remarkable condition both inside and out.

Unfortunately for GG, not long after the company debuted the Quadster, the world was rocked by a global financial crisis, which obviously had a negative impact on sales, and very few Quadster units were produced globally before GG ended production in 2015. The few examples in circulation are already spoken for. With no new units being produced, these are incredibly rare finds, making your average Can-Am look as common as a Honda Passport.