Additional photos of these Joan Mir leathers are available here for your perusal.

Joan Mir needs no introduction, as he’s the current champion of the highest level of motorcycle road racing in the world! But let’s talk about him a bit anyway.

Mir broke into Grand Prix racing in 2015 with a single race in Moto3 – two seasons later he won the Moto3 championship, and he was off to Moto2 for 2018 with the Marc VDS Racing Team. Though he signed a three year deal, he placed sixth his first year, and Suzuki came calling as they wanted someone to replace Andrea Iannone (who went to Aprilia and is now serving a doping ban). His rookie season in MotoGP was 2019, in which he earned multiple top 10 finishes (with a best of 5th) and placed 12th overall. In 2020, he won the overall championship in the penultimate race – in the process he became Suzuki’s first MotoGP champion since 2000 (Kenny Roberts Jr.), the first Moto3 champion to with the MotoGP championship, and the quickest rider to win a championship (within five years) since Nicky Hayden. As this article points out, that puts him in the company of legends like Giacomo Agostini, Mike Hailwood, Eddie Lawson, Kenny Roberts, and Freddie Spencer. 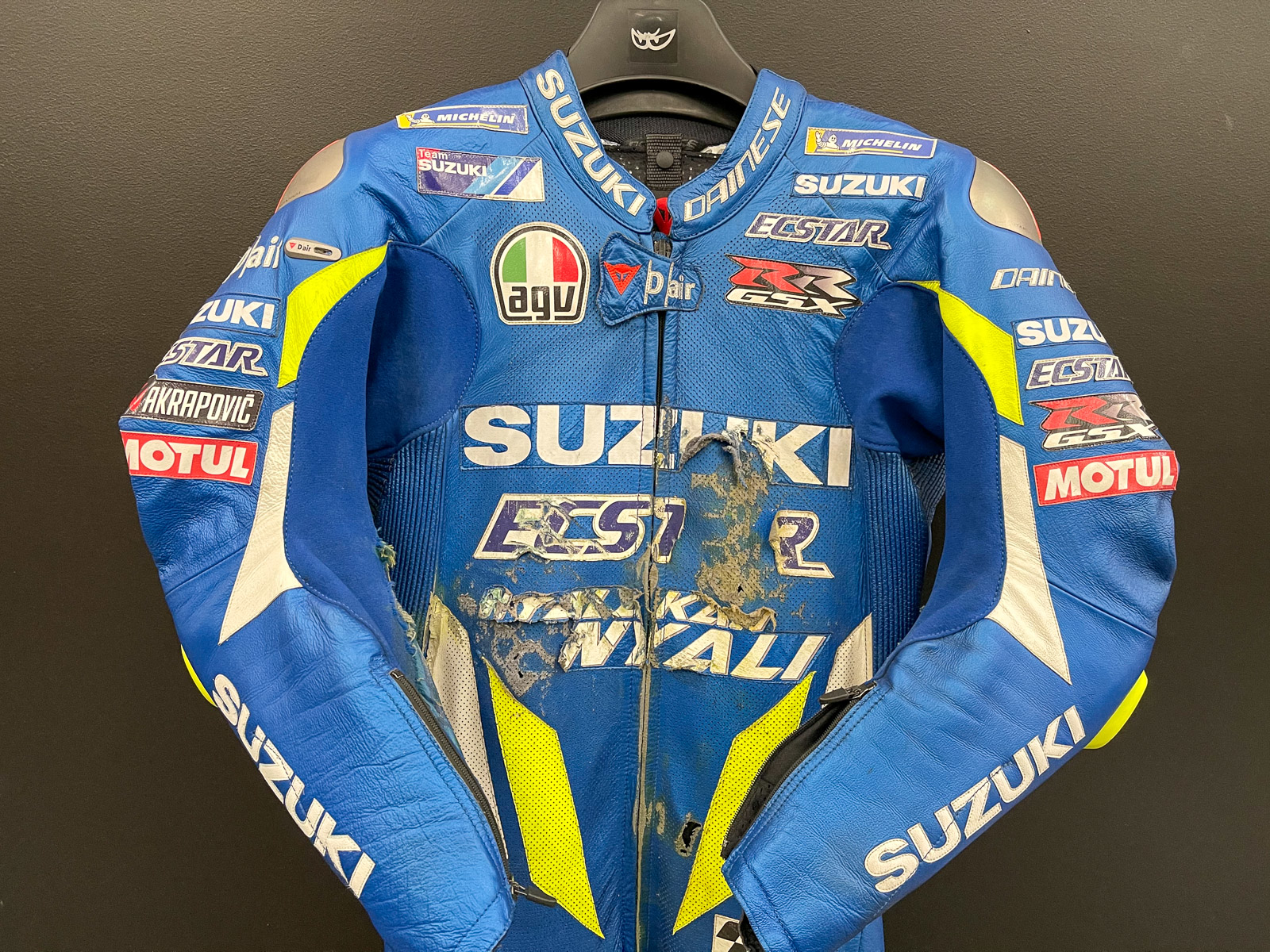 This suit comes from Joan’s 2019 rookie season, and it has clearly been crashed in. 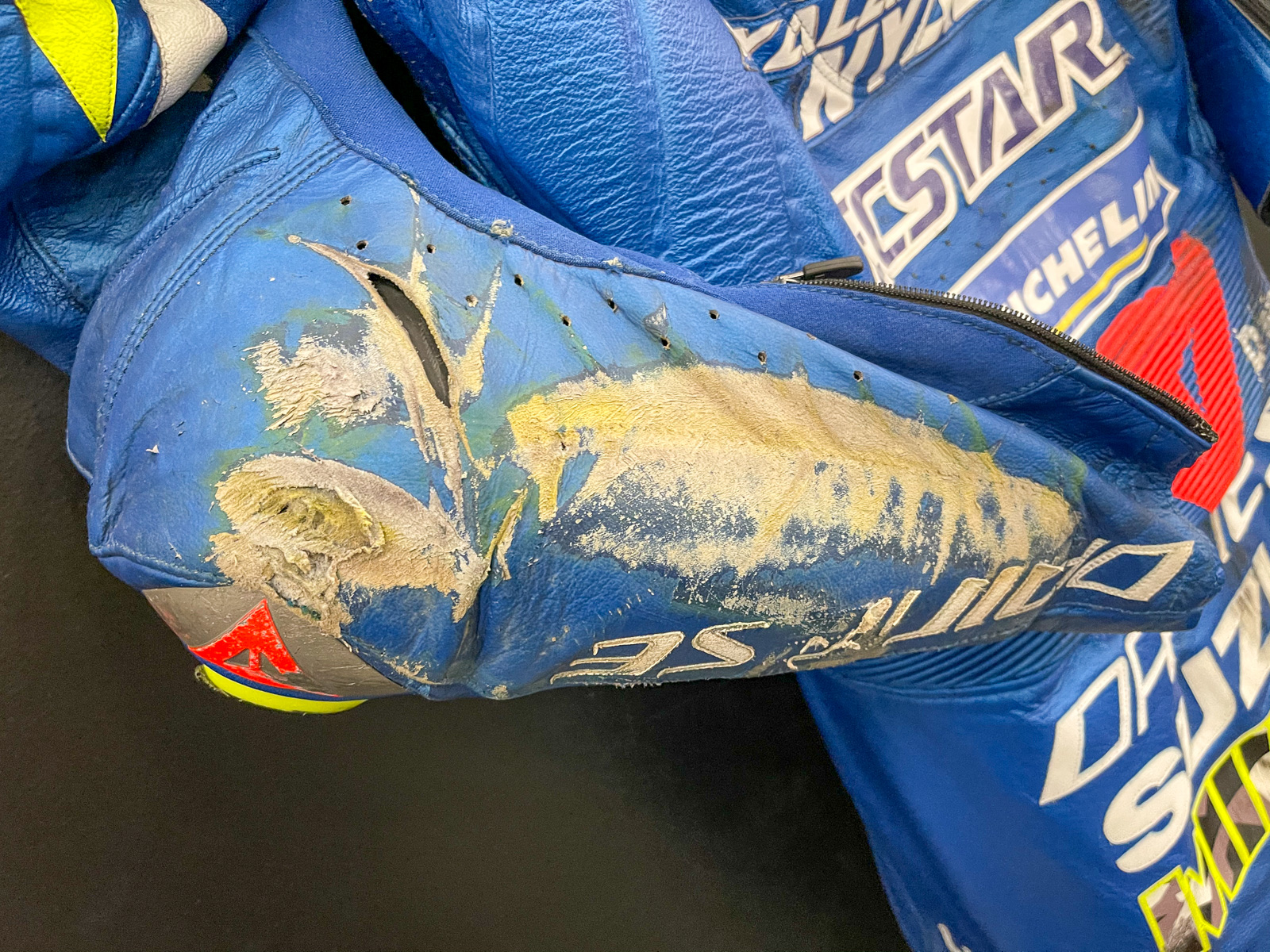 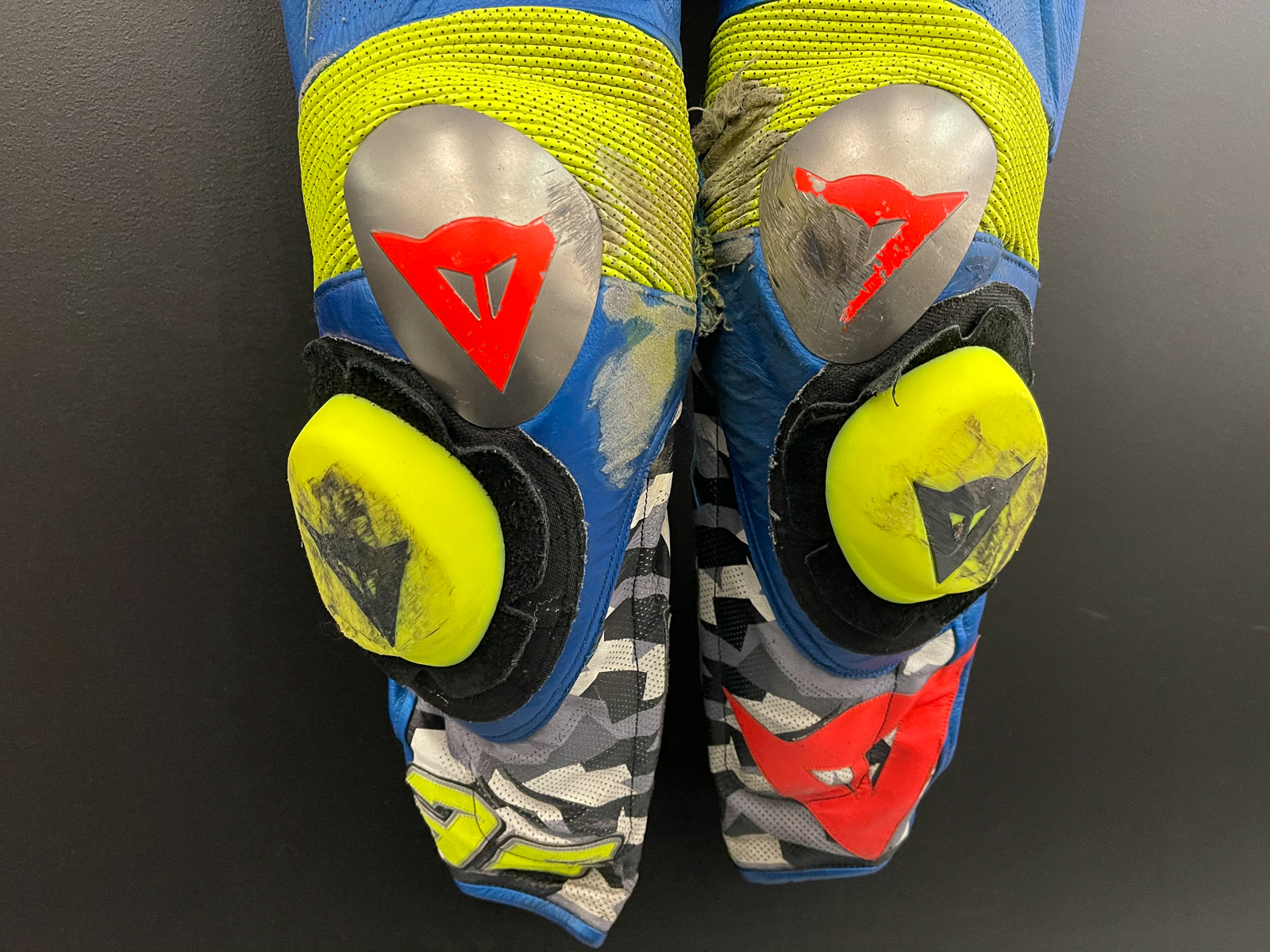 We are not able to confirm with 100% certainty when Joan wore this suit, but our research shows that he only had two notable crashes in the 2019 season. One was a truly odd crash in which both Mir and Karel Abraham lost their respective front tires while on the brakes in a warm up lap at non-race pace – the damage to Joan’s suit does not match what we have here. Here’s a fascinating look at that crash in 360 from Johann Zarco’s bike (incident happens 20 seconds in):

The other crash Mir suffered was at ~180 mph during the Brno test after the Czech GP. It appears that there is no public footage of that crash, though it was significant enough that Joan developed a pulmonary contusion and had to miss the following two rounds of the season. Based on the speed of the crash and the damage to this suit, it is our belief that this is the suit from that event.

The suit was made by Dainese.

One would have to assume that this crash gave him the practice needed to pull off one of the greatest post crash get-ups we’ve ever seen a year later. Have any Mir stories or questions about this listing? Let us know in the comments!