Any place that calls itself a hamlet probably doesn’t expect much in the way of visitors. So, why does Oyster Bay, New York get people from all around the world? Well, because that’s where Billy Joel has his motorcycle collection. On my tour of New England last year, a few friends recommended that I stop by 20th Century Cycles. Here are my personal highlights!

Billy has a residency at Madison Square Garden – he plays a show there once a month as long as he’s selling tickets. This started on January 27, 2014 and the 74th consecutive show was scheduled for March of this year but COVID forced him to take a temporary hiatus. I was told that dedicated fans would fly into New York for a few days, catch Billy’s show, and then take a two-hour train (one way) just to check out this little slice of motorcycling nirvana for an hour. 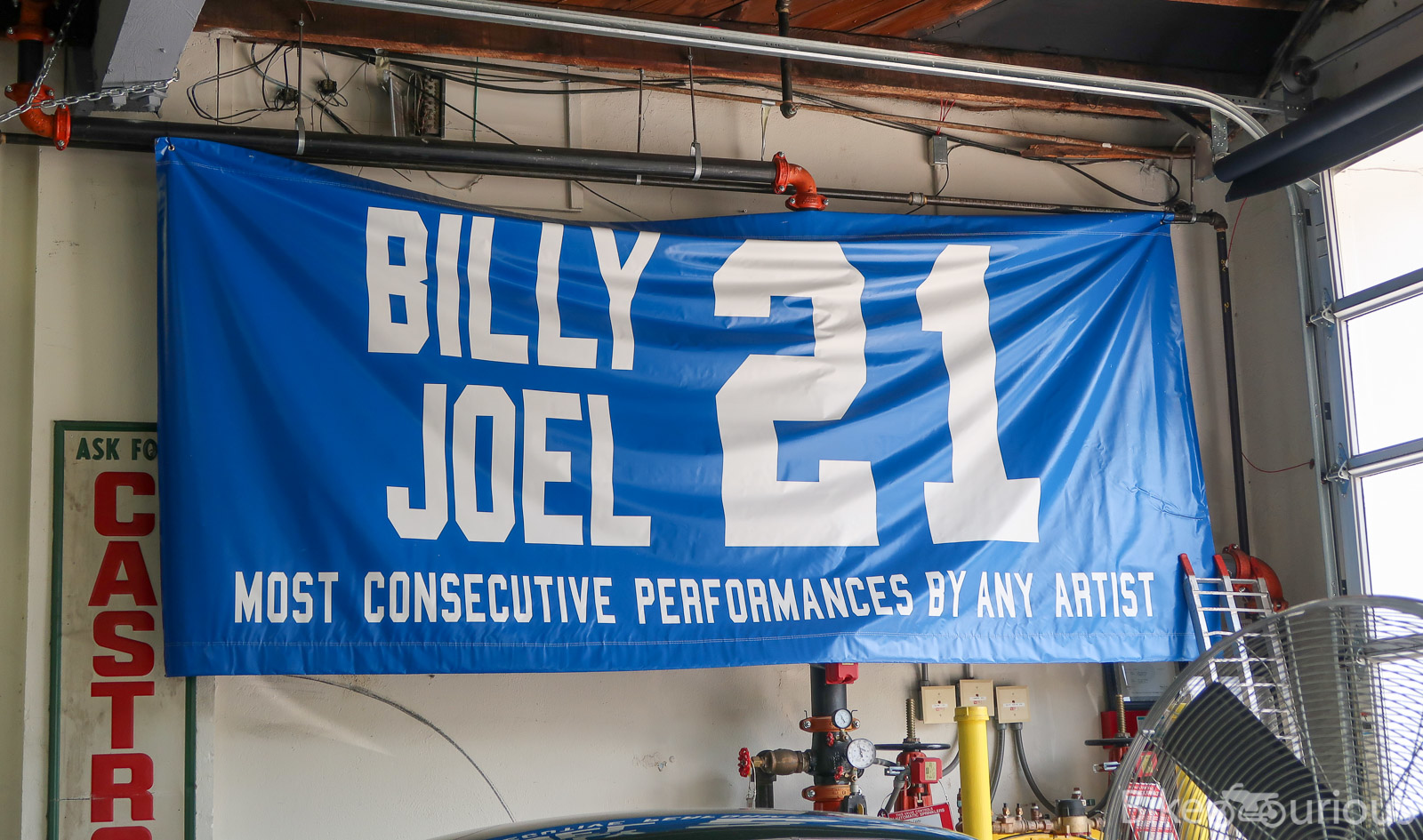 Open the door and you’re greeted by an eclectic collection.

You’ll also likely be greeted by Alex Puls. Billy Joel may get all the headlines, but the real star here is Alex. Call him the Chief Mechanic, the Shop Manager, the Museum Curator, maybe even the Big Kahuna, but he’s the man behind the collection at 20th Century Cycles. Here’s Alex and his wife Trish in front of the shop truck, a 1941 Chevrolet 3/4 ton dually that was originally a dump truck. It’s still got the original 216 ci 6-cylinder engine and 4-speed transmission. No word on if Alex still has all of his original parts.

I didn’t know what to expect when I showed up, but I was lucky enough to benefit from an introduction made by Somer Hooker. Alex had given me a heads up that he wouldn’t have time for an interview or anything along those lines, though he was still incredibly generous with his time. I lucked out, because he’s got a fascinating story. Alex ran away from home as a teenager, and he started his motorcycling career doing minion work at Blue Moon Cycle. He worked his way up through shipping, parts, and eventually to motorcycle sales.

In 2000, he got a call from someone named Bill. Bill said he was on a tour and was having problems with his Moto Guzzi – he got his front wheel stuck in a trolley roundabout and went down so he needed some parts. At this point in the story, Alex laughs and says that he felt bad for Bill because that decade was a “horrible time to have a Guzzi.” Of course, Alex thought “Bill” was on a motorcycle tour. Eventually he’d find out that it was Billy Joel and his “tour” was a concert tour he was doing with Elton John, so the Guzzi was spending most of its time in the tour bus. Alex helped him out and they became friends.

Billy offered Alex a backstage pass to an upcoming concert, and Alex went even though he figured there would be tons of people backstage. He wasn’t even a big Billy Joel fan anyway – “I preferred punk” – but he went (blowing off a German final in the process) and it ended up just being him and Billy Joel, talking bikes for two hours. Fast forward a few years, and Alex is in charge of maintaining Billy’s European bikes, either by having bikes shipped down to him in Atlanta or flying up to New York to work on them at Billy’s place.

The Ducati 750 Sport and the Vincent Rapide were 60th birthday presents for Billy – the former from his ex-wife, and the latter from his lighting designer. The lighting designer was originally thinking of a Norton Commando, but Alex guided him towards a Vincent instead, and ended up sourcing this specific bike. Alex actually took both bikes to Chicago as that’s where Billy was on tour at the time and somehow snuck both bikes into the Ritz-Carlton to surprise Mr. Joel for his birthday.

Billy’s response was to ask Alex if he could also work on his American and Japanese bikes. Alex said yes, but that was a lie! He became Billy’s go-to guy for motorcycles, and relied on YouTube videos to teach him the service work that he didn’t already know how to do. They opened the Oyster Bay location in 2009 – it was previously a carpet store and then a child’s tumbling studio. It took about 6 months just to build it “into an empty space” as they had to install the HVAC system, front windows, ceiling, carpeting, you name it. Then, of course, you have all the decor. I loved the tanks… 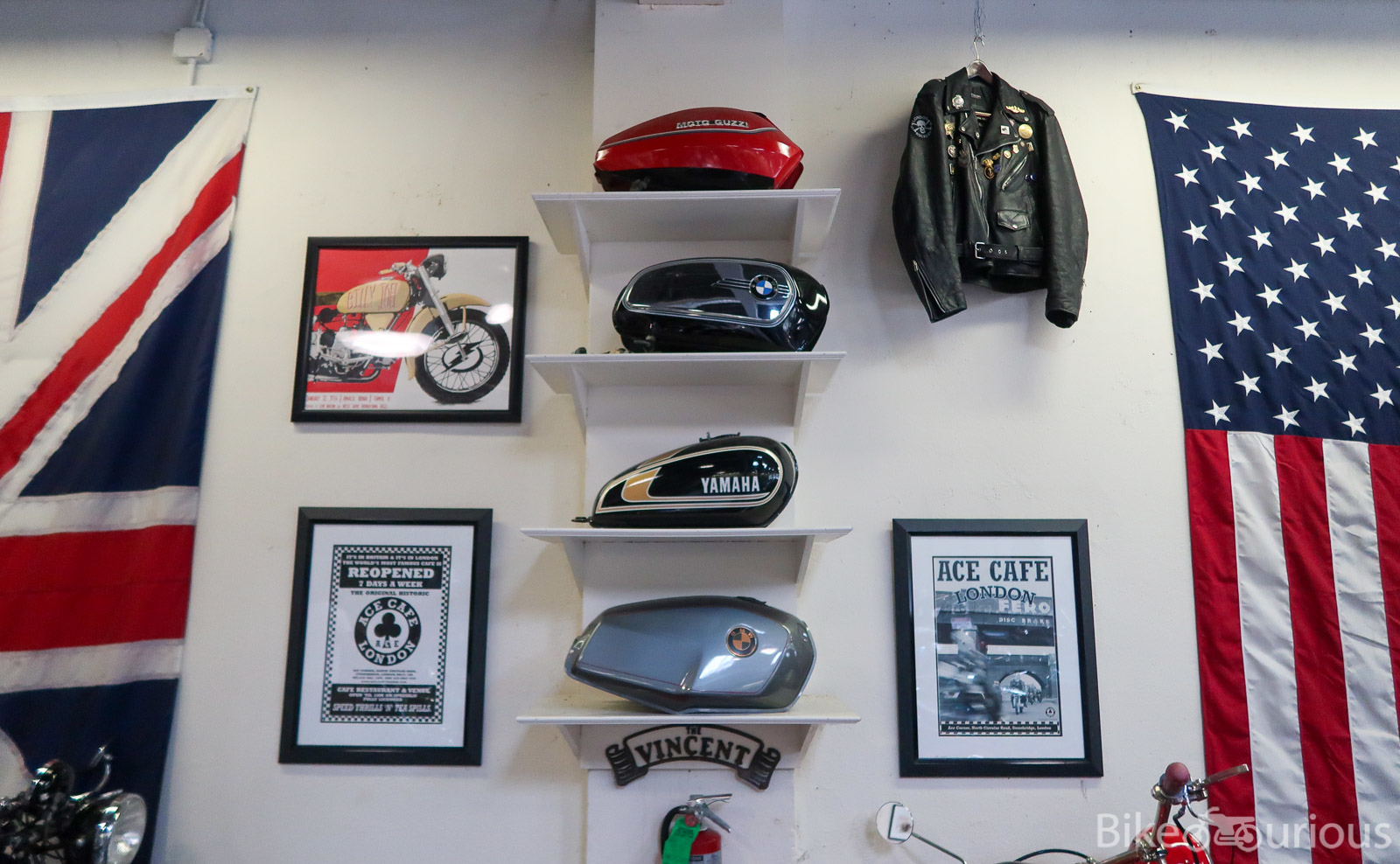 …but when it comes to wall art, it’s tough to top an entire Moto Guzzi. Interestingly, it’s a V35 Imola. 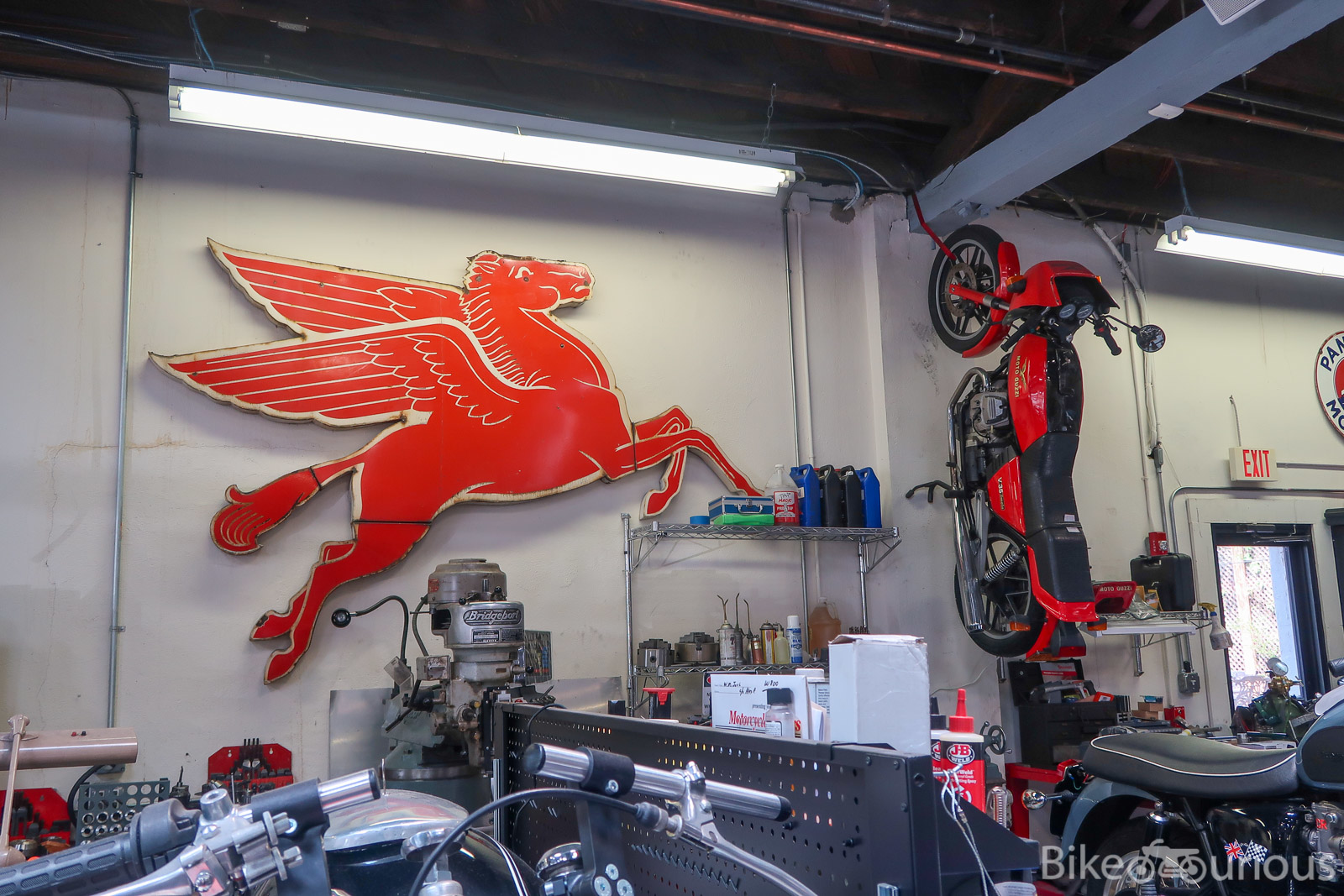 The V35 is notoriously slow, so most riders might not mind having it in an unrideable state. But there are several other interesting Guzzis that are ready to go.

In fact, Alex mentioned that the President of Moto Guzzi once came by for a visit and joked, “You have more Guzzis than many of our dealers!” 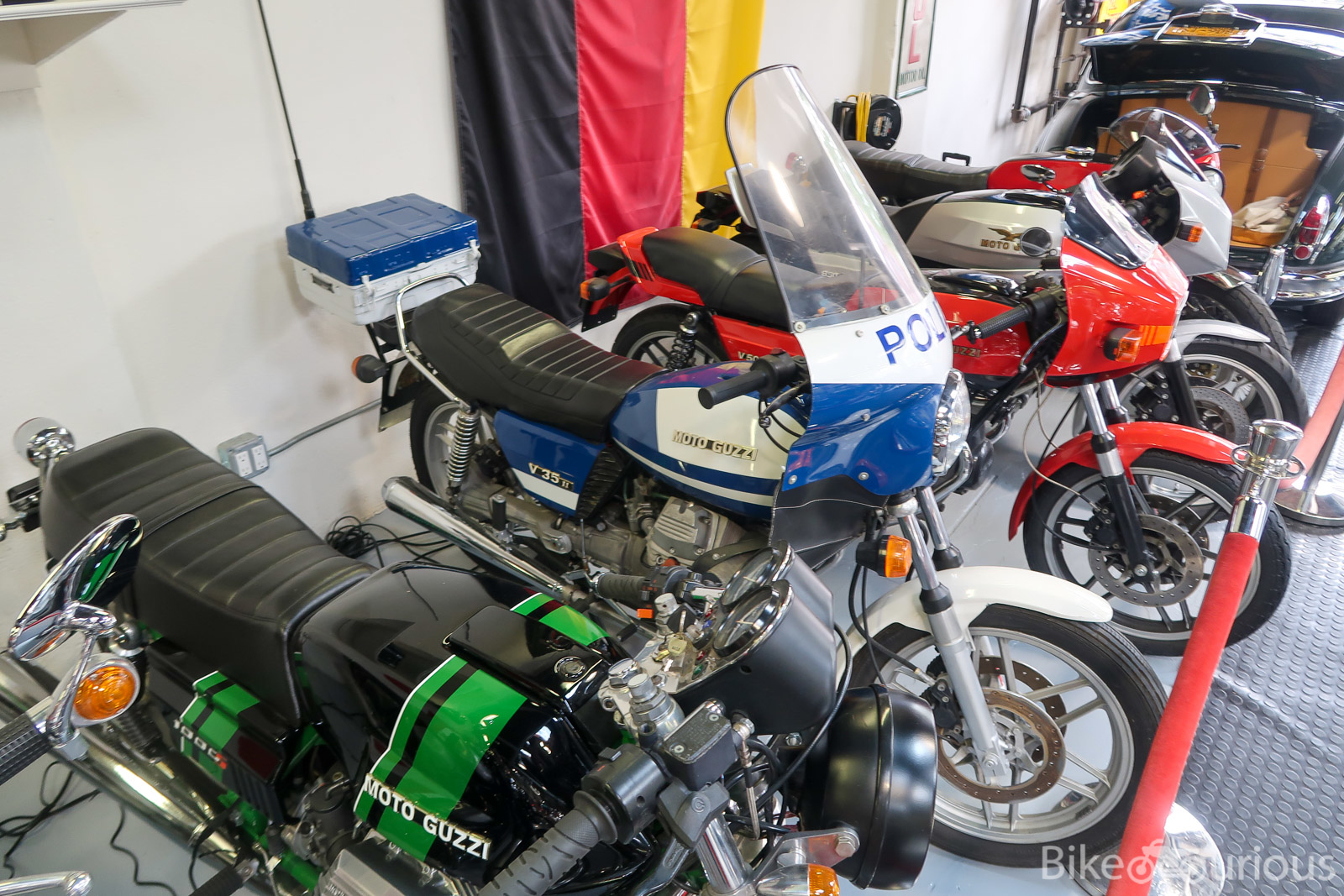 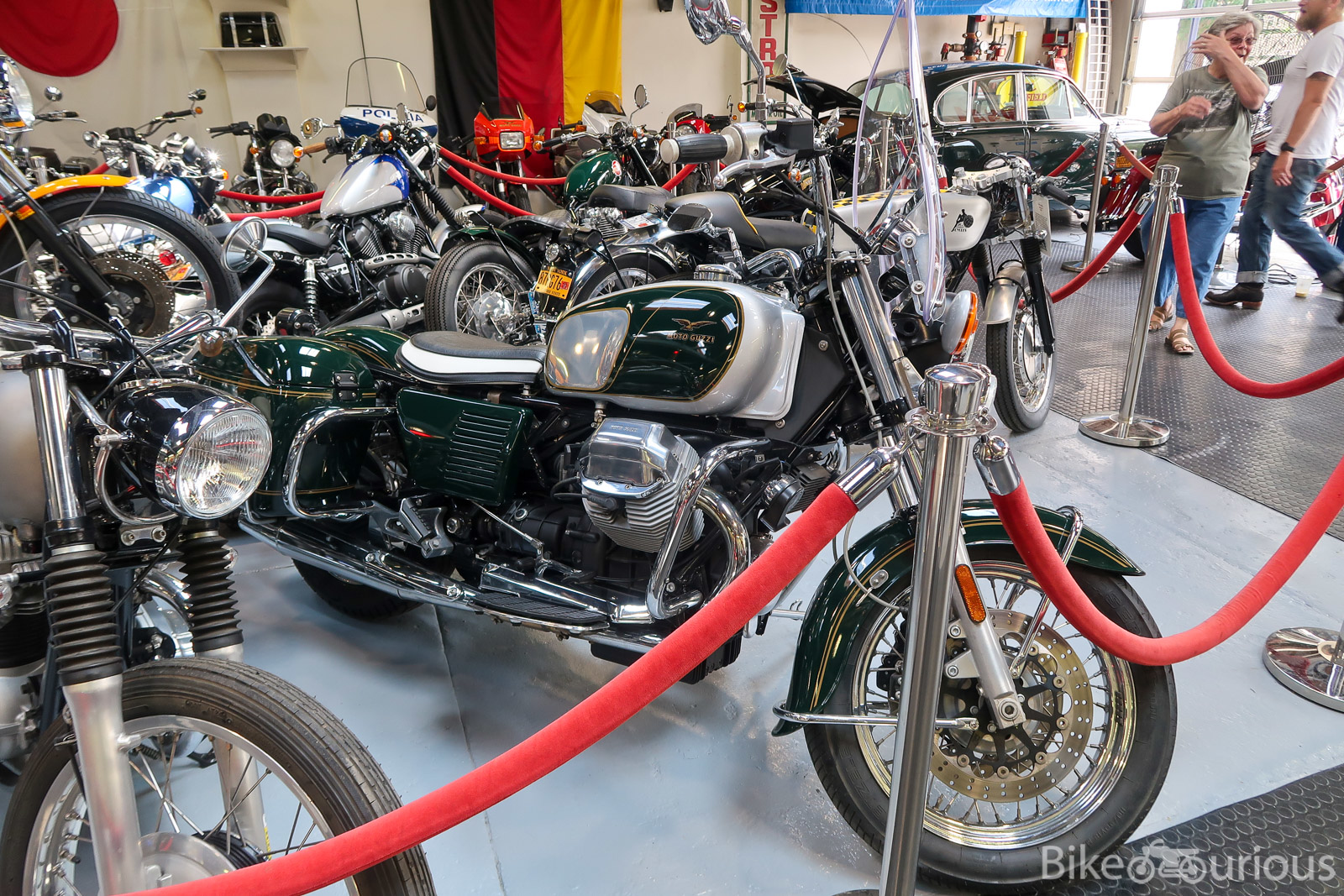 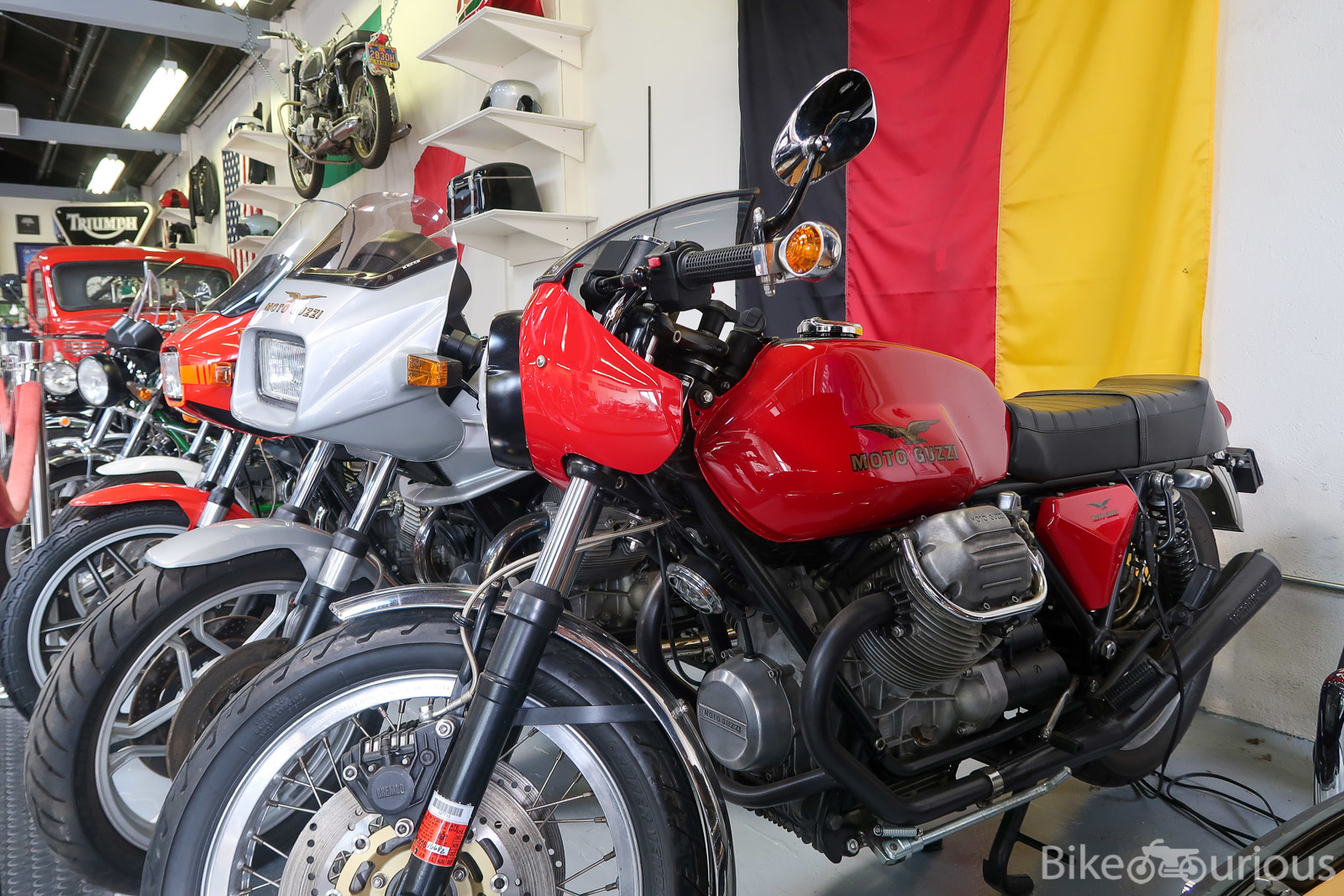 At this point, someone enters and immediately wants to chat up Alex. His job must be exhausting – he has to be knowledgeable, charismatic, and he presumably can’t ever lose patience with the waves of guys who want to share their own personal stories or tell him things he’s already known for decades because he represents a famous celebrity. I’m feeling appreciative at the moment that I can just step aside and ignore the public. So that’s what I do, and I take a lap around the building.

Something Alex told me earlier in our conversation sticks in my head – Billy “likes how old stuff looks and how new stuff performs,” and that’s reflected in several customs that blend modern drivetrains with classic lines. 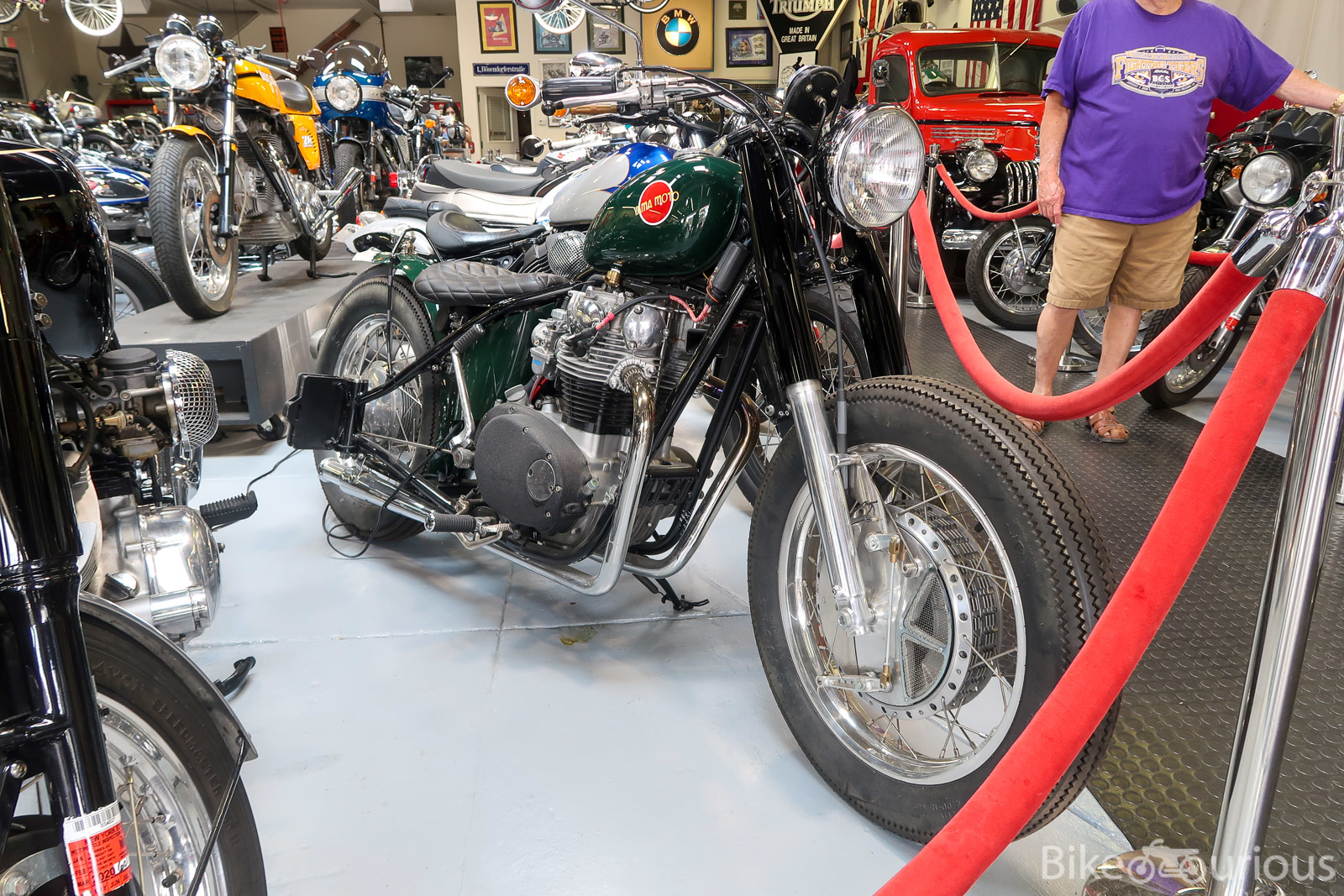 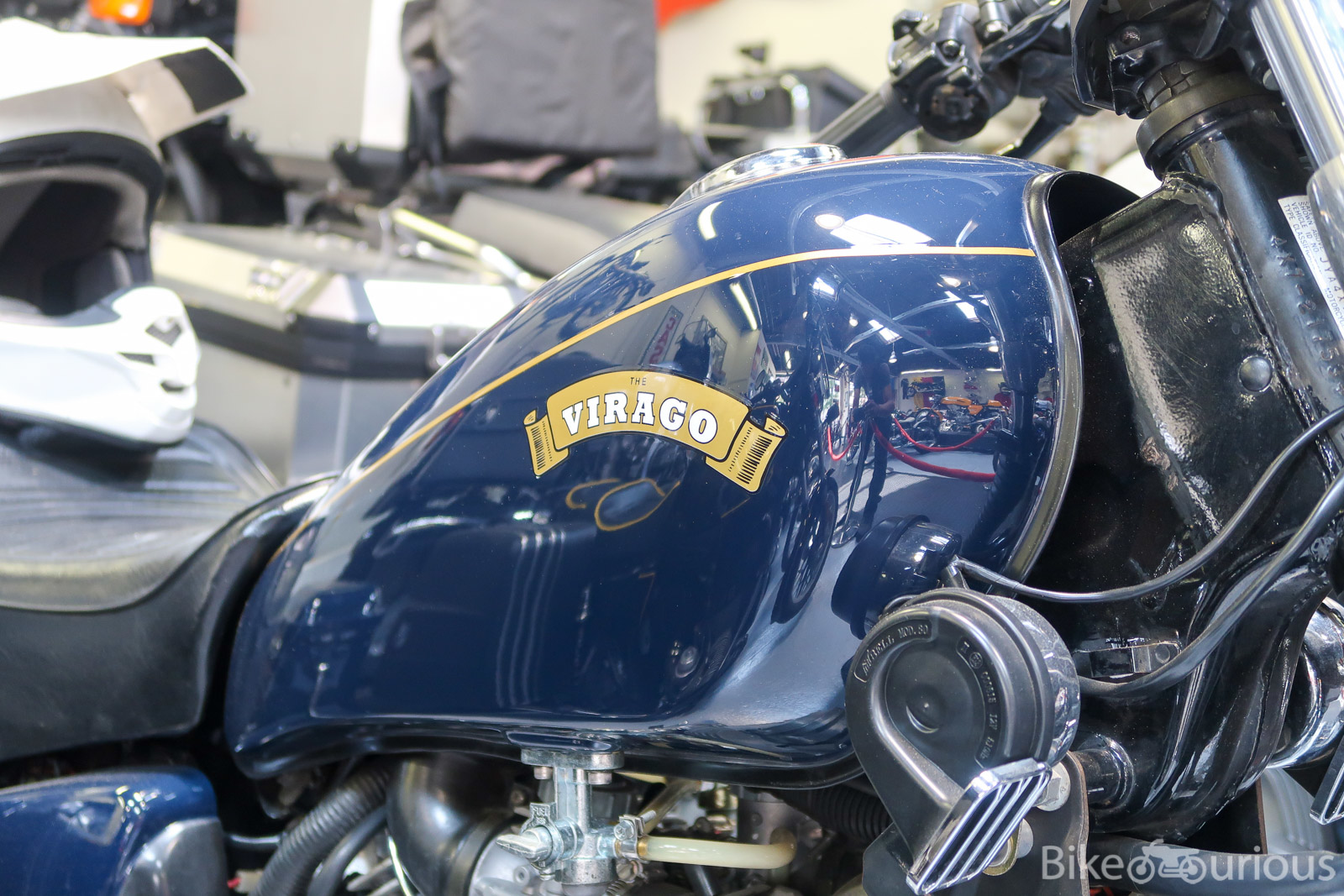 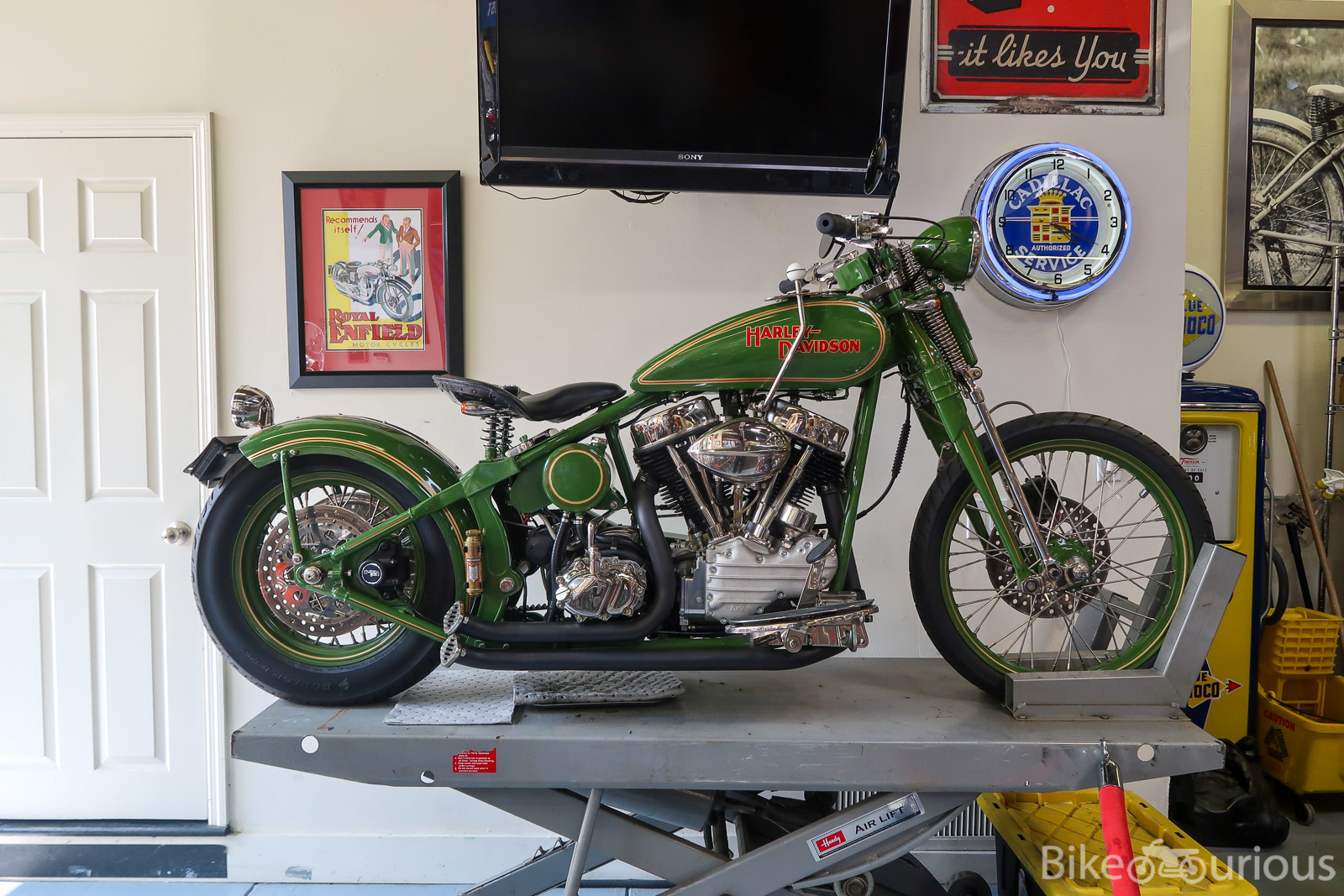 This is the “Sacred Cow” from Deus Ex Machina’s shop in Australia. It’s based on a Kawasaki W650.

Billy once rode this Stella with a sidecar out to meet the singer Bono for lunch. He told Bono to send his driver away, and he’d take him back to his hotel in the hack. However, they got lost and had to start asking locals for directions. Imagine mowing your lawn when Billy Joel and Bono pull up on this and ask you how to get back to the city!

One of my favorites was yet to be completed (but it’s been so long since I visited that hopefully it’s ready to go now). It’s a BMW airhead with a Suzuki DR-Z400 front end, 19″ front wheel, and an Evan Wilcox aluminum tank.

The intent is to create a “modern version of a hypothetical BMW enduro from the 70s.” 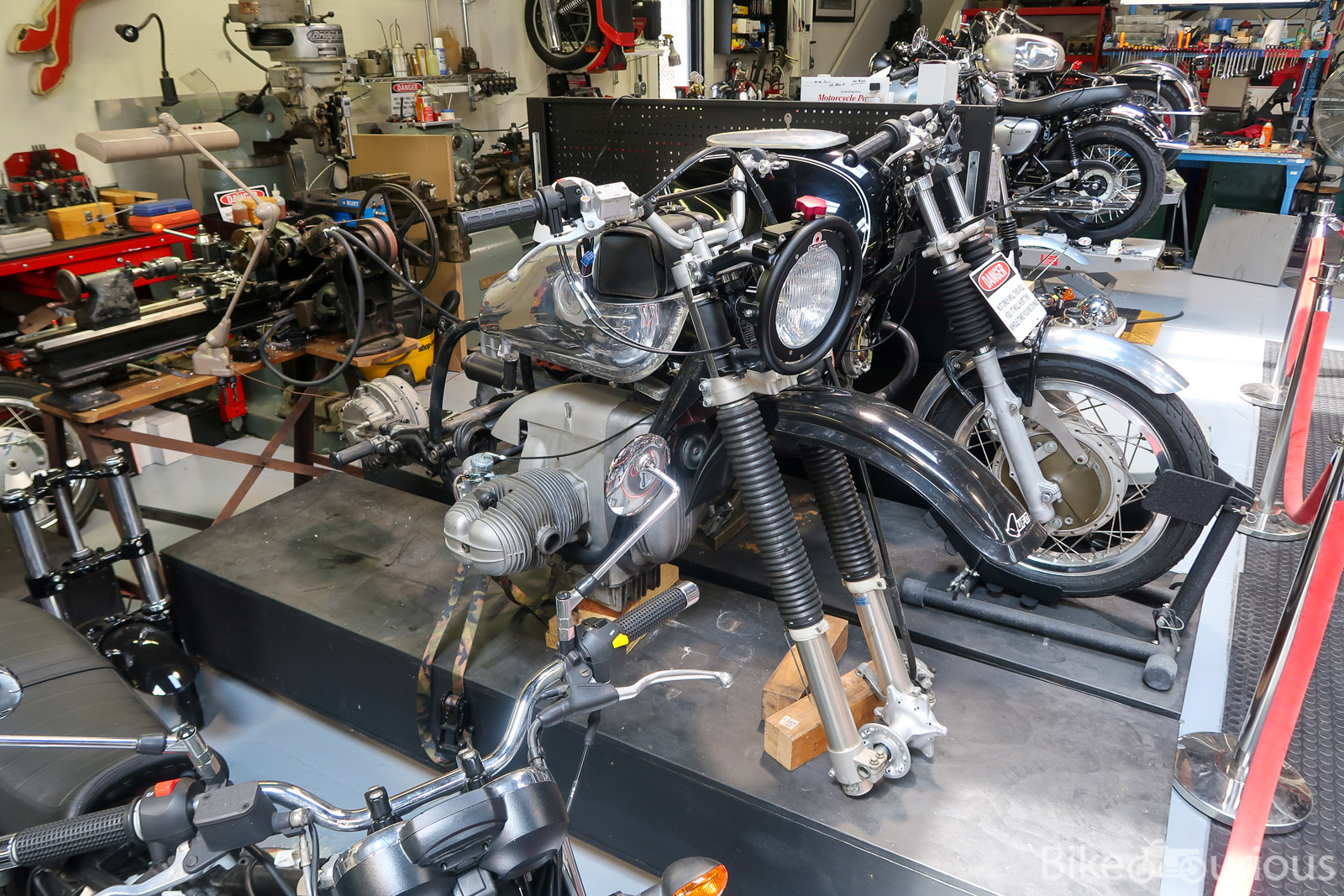 Evan Wilcox is well-known for his ability to create custom alloy tanks and bodywork. Parts aren’t cheap and the wait is significant, but Alex is one of his many fans. Alex called up Evan at one point to inquire about a full fairing, but the ~$5,000 price was too much to swallow. Alex asked Evan to explain the process a bit, and they ended up speaking on the phone for about two and a half hours. “By the end of the call I had a good sense of how to shape aluminum and a very keen sense about why Evan gets his rates.”

I’ve got a few more photos from 20th Century Cycles here in this album, but obviously the ideal situation would be for you to visit it in person. This shop is about being part of the community – Billy grew up nearby, and he wanted to provide a much-needed destination in the area for people to ride to and enjoy. It’s not a charity or a write-off, it doesn’t make money, it’s just about making life better for local motorcyclists. I hope you get a chance to check it out!