Additional photos of this 1985 Honda NS400R are available here for your perusal.

In 1983, Freddie Spencer became the world’s youngest 500cc World Champion, and he did it on a Honda V3. Honda responded by releasing a 250cc production bike to commemorate the win, but it took them until 1985 to build something closer to the actual size of Freddie’s champion. That was the NS400R, and even though it gave up 100cc and plenty of power to the race bike, Honda called it a “race replica”.

The two-stroke V-3 displaced 387cc and it was good for 72 horsepower and 37 pound feet of torque, both at nearly 10,000 rpm. Oh – and the whole thing weighed less than 360 pounds. For more information on the NS400R, check out this article from Classic-Motorbikes.net.

Depending on who you talked to, the NS400R wasn’t as fast or aggressive as the 500cc race reps from Yamaha and Suzuki – but the tradeoff was that this was a confident handling bike. A review rehosted on Motorcycle Specs says “the NS is exciting and pretty near faultless.”

The seller acquired it almost three years ago from a private party in Torrance, California who had imported the bike into the US. Back in late 2018-early 2019, this NS400R underwent a complete frame-up $12,000 restoration with RestoCycle, LLC. As part of this work, the motor was de-restricted. The seller has covered approximately 150 miles since the restoration was performed. 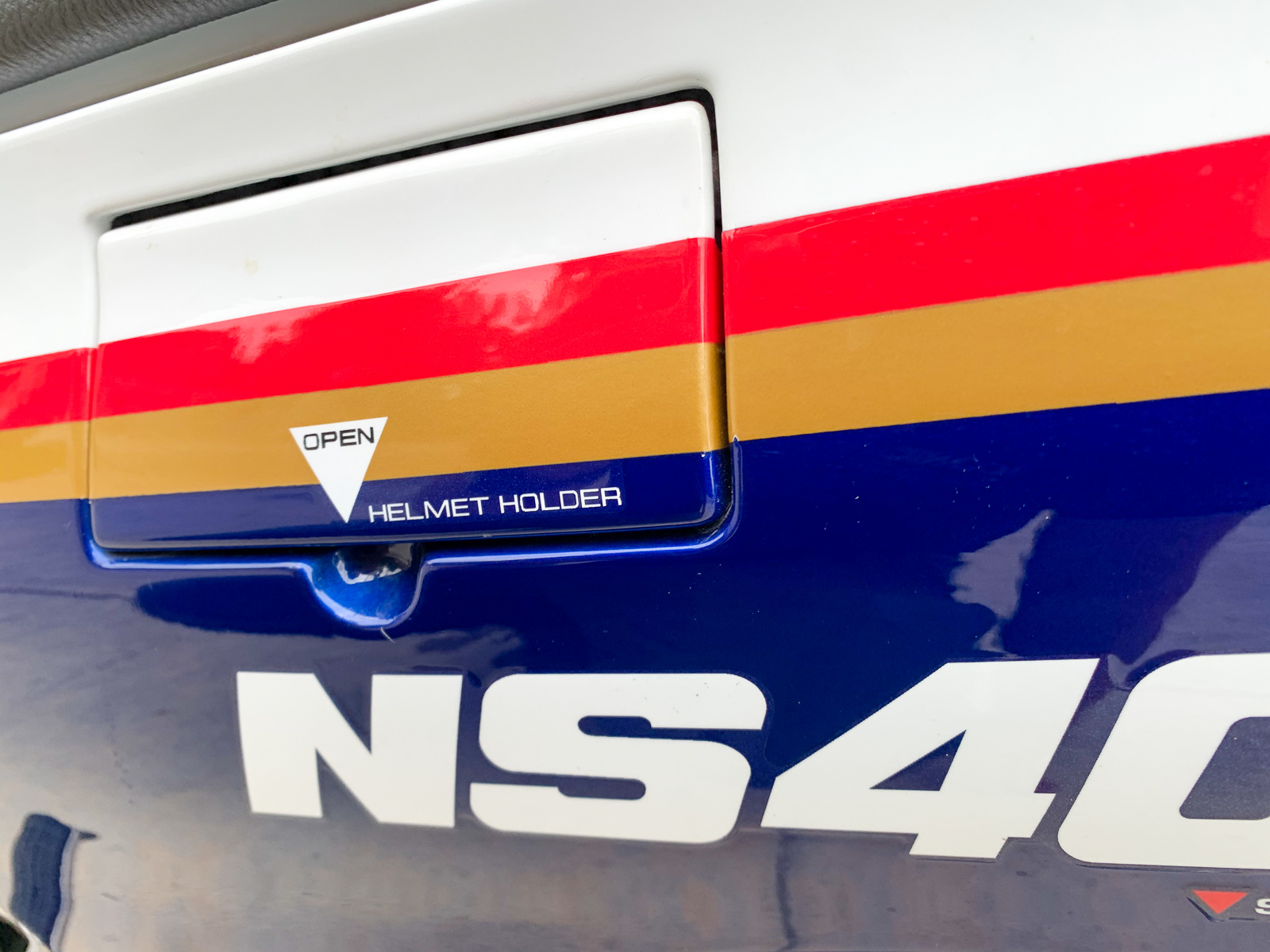 Photos from the restoration are available here. 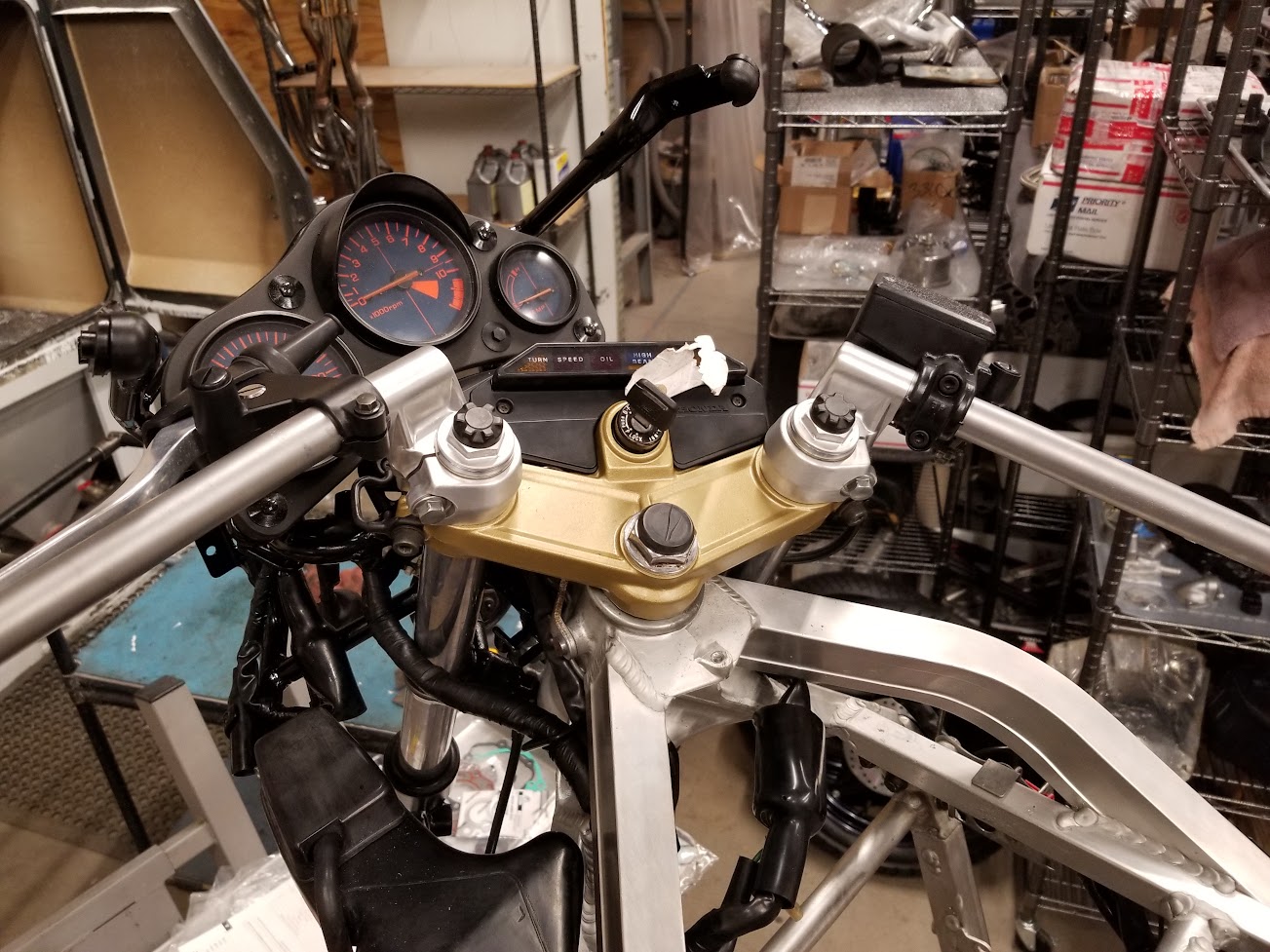 There is a YSS shock. 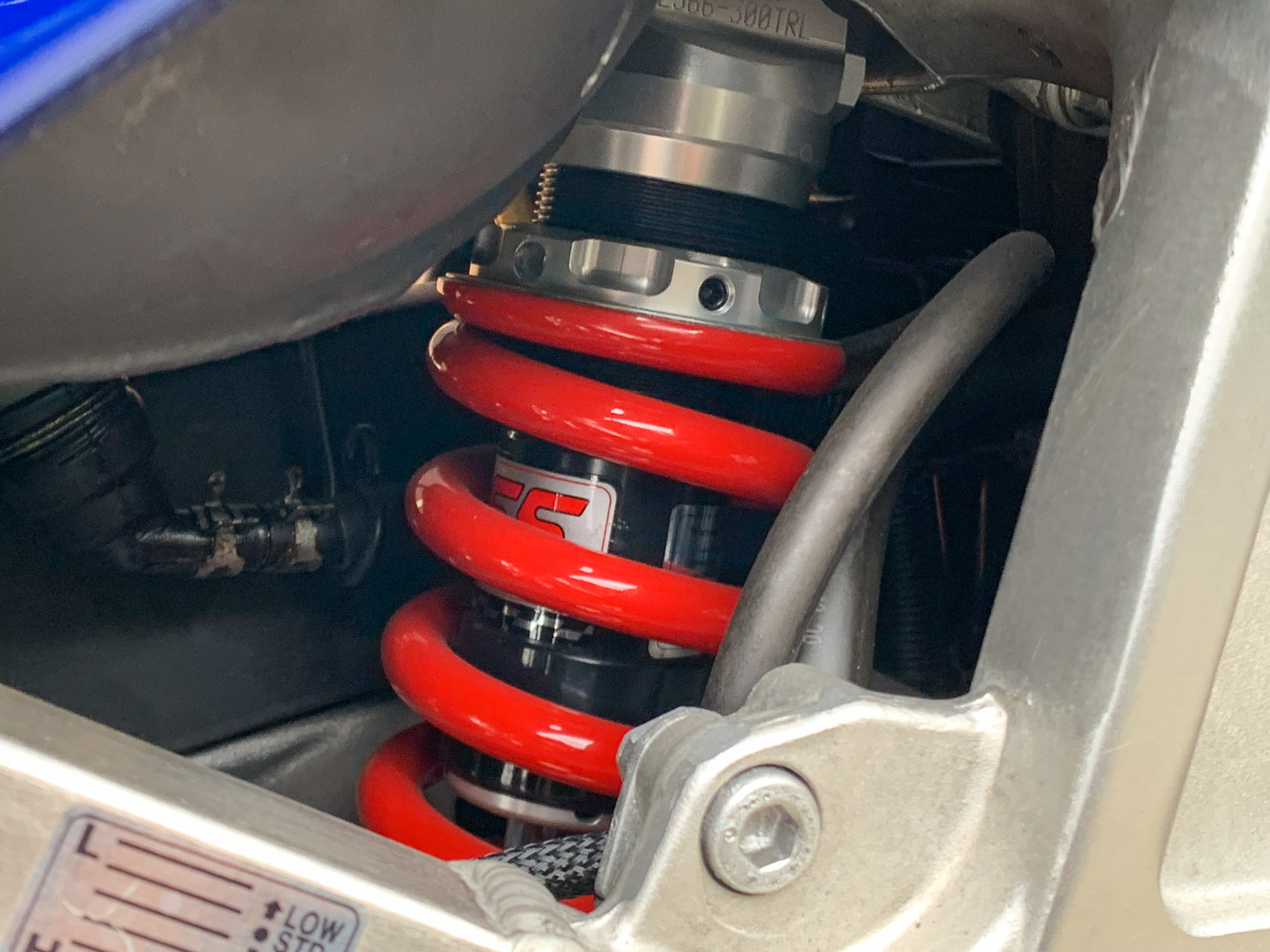 Currently located at our shop in Marina del Rey, California for anyone that would like to inspect it in person, this NS400R is sold on a clean Vermont title.

We note some rub marks on the exhaust shields, faded switchgear, a couple of small chips/paint imperfections on the upper fairing edges, and corrosion underneath the fuel cap. The seller reports that there are no mechanical issues. 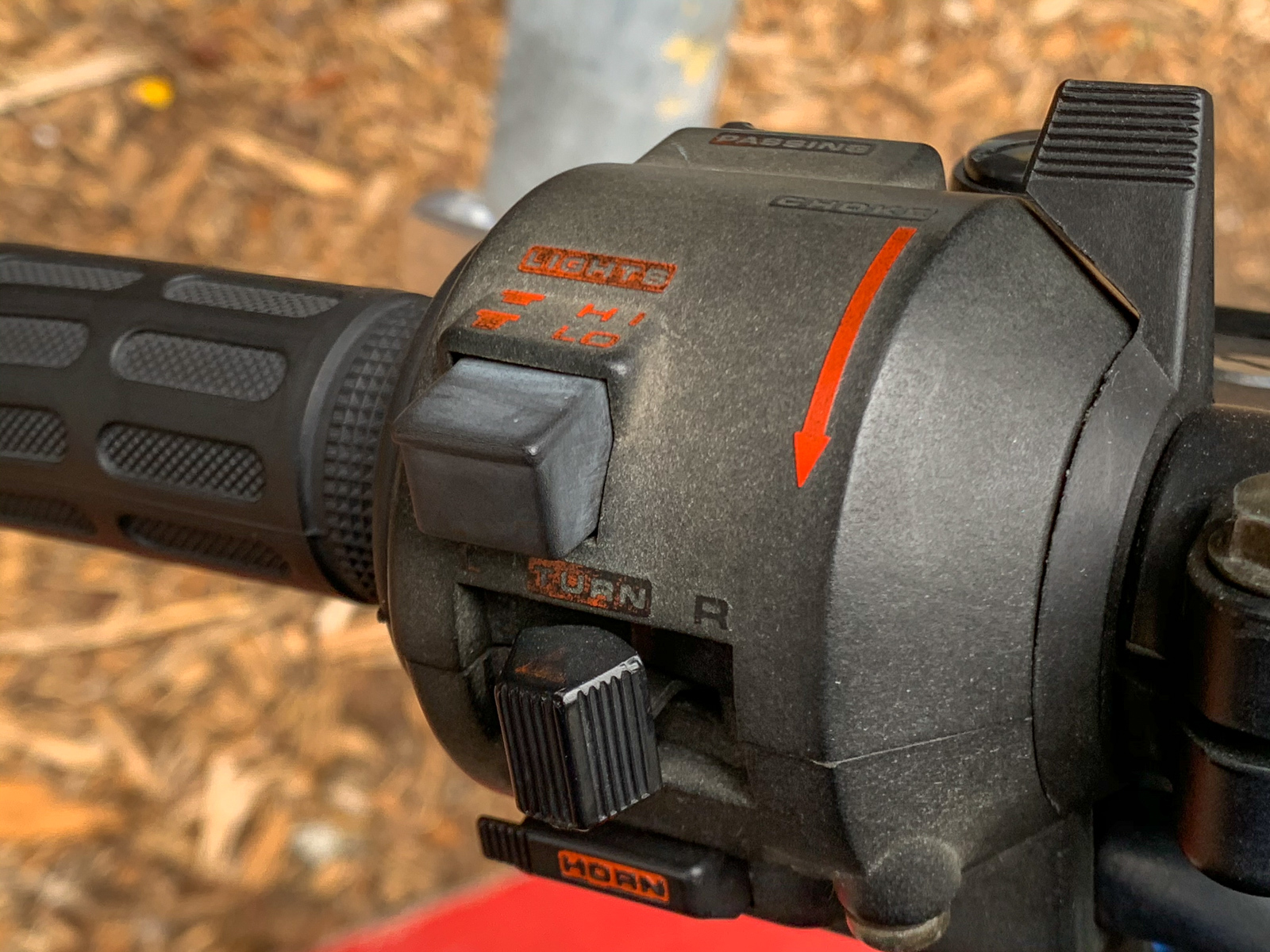 The seller is letting this go as he just snagged a wonderful RG500 Gamma from us and he needs to make some room. The seller notes that he has “a box of miscellaneous NOS seals and bits” that are included in the sale. Have any NS400R stories or questions about this listing? Let us know in the comments below! 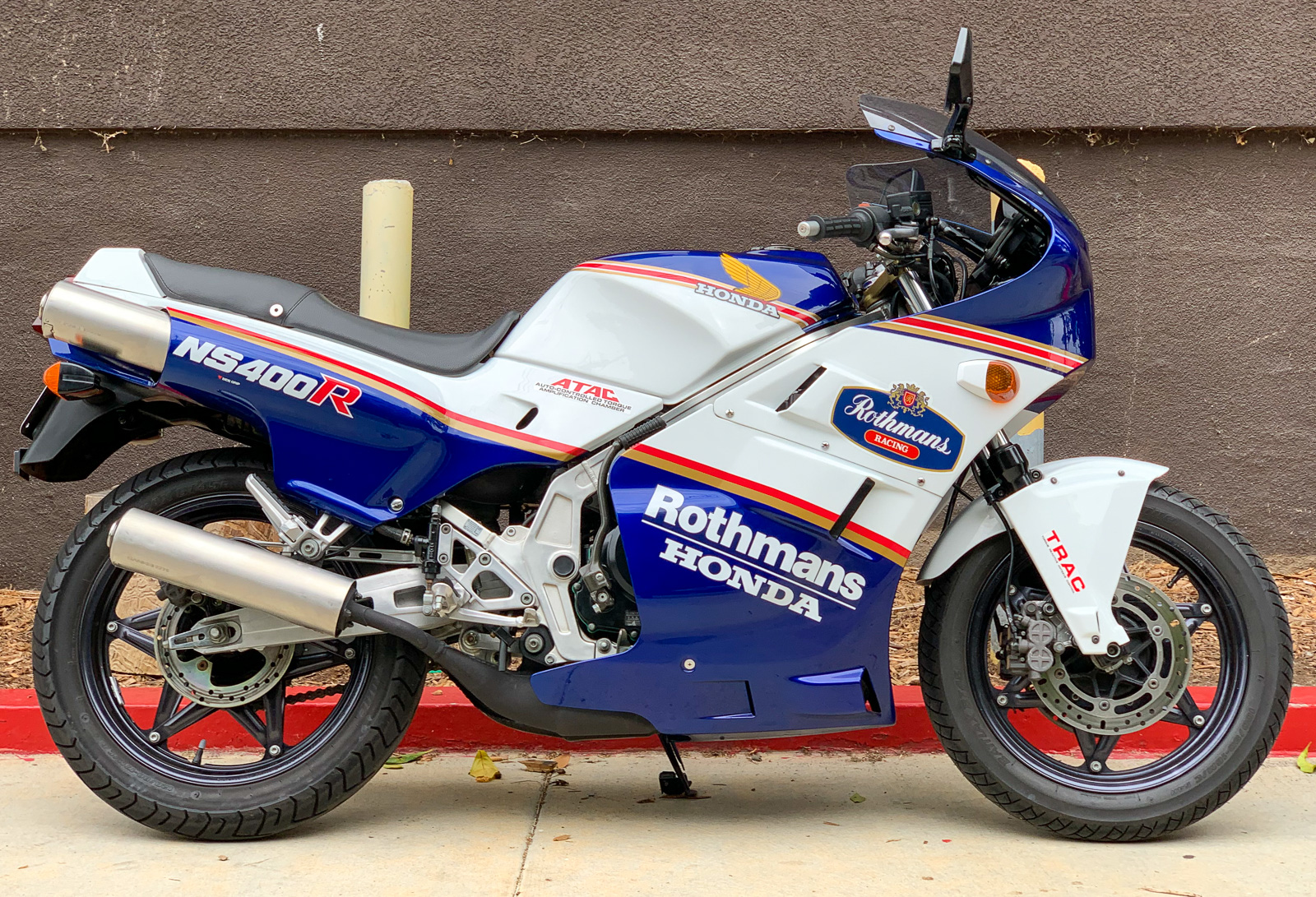 That price is pretty unrealistic with the mileage and defects……for 16K that things should be PERFECT and the motor rebuilt. Good luck with the sale!

Here’s a suggestion: dont like the price? Keep yr opinions to yourself and dont buy it!

Good luck with the sale.

I didn’t see a VIN badge on the frame. Is this a 17 digit VIN bike?