Click here for an CycleVIN Motorcycle History Report on this 1988 Bimota YB4 750 EI. Additional photos are available here for your perusal.

The YB4 was Bimota’s fourth Yamaha-based bike, built around the FZ750 (2MG series). The machine was developed for the ’87 season of the prestigious Formula TT World Championship. It first premiered at the French Bol d’Or Endurance Race of ’86 but after homologation rules forced the company to churn out a minimum number of production road-goers, Bimota would use the Milan Motorcycle Show at the end of ’87 to introduce a road-going variant of the then-cutting-edge scoot. The following year, these machines would become available to the public, known as the YB4 EI (or Electronic Injection), whereas the non-street versions were called the YB4-R, or Race.

Powering the Bimota was one of Yamaha’s liquid-cooled 749cc four-stroke traverse four-cylinder, DOHC engines with Weber Marelli electronic fuel-injection that reportedly made a cool 121hp at 10,500rpm and 65ft-lbs of torque at 10,400rpm. The YB4’s also used the Yamaha’s standard six-speed transmission in addition to the Japanese engine. But like all Bimotas, a big part of what makes the YB4 shine is its chassis, which was designed by Federico Martini. Instead of using Bimota’s traditional steel-tube structures, the fourth-Yamaha based bike from the boutique Italian manufacturer featured a frame comprised of two diagonal beams with internal ribbing, and the cylinders being supported via plates bolted to said beams. The entire chassis and swing-arm were both aluminum units.

The suspension on the YB4 was another key area the Italian super bike had a leg up on its Japanese donor machine. Up front, Marzocchi M1R forks with external adjustment for anti-dive absorbed the rider’s violent braking and the track’s imperfections while a single gas unit manages the aluminum swing-arm in back. The brakes on the ’88 Bimota consisted of dual 320mm discs up front and a single 230mm disc in the rear, with the entire system built by Brembo.

The engine really wasn’t all that special, though the machine’s superb chassis and suspension enabled it to perform magnificently, and as a result quite a few impressive feats would be perform aboard YB4’s. On July 8, 1990 during the German Super Bike championship at the famous Sachsenring, Peter Rubatto clocked a circuit record on a YB4 with an average speed of 112.59 mph, dethroning Giacomo Agostini’s record which had stood since 1968. And arguably more importantly, during the 1987 World Endurance Championship, Virginio Ferrari would be crowned champion (while riding his YB4), while also putting an end to race legend Joey Dunlop’s five-year win-streak in the process. Dunlop had been unstoppable on his Honda for the half-dozen or so seasons leading up to 1987, so it was a big deal when he was beaten, especially by a bike from a company with much more modest resources.

This example (VIN: YB400294, Engine #: 2MG900023) is one of over thirty motorcycles from the Alan Wilzig collection that we are auctioning off. Alan acquired this bike in November of 2002 from a private party in the Isle of Man and has had it on display in his collection ever since.

Maintenance:
In preparation for the listing, Alan asked us to make it a runner – he had had us install a new battery, Hella headlight, rebuild the front brake, clutch, rear master clean and rebuild, change the the fluids, and give the bike a detail. Daniel did the work, he notes that both brake pads are at 80% and that the tires need to be replaced if the next owner wants to ride this Bimota. They also recommend a new horn and fork service due to a leak. 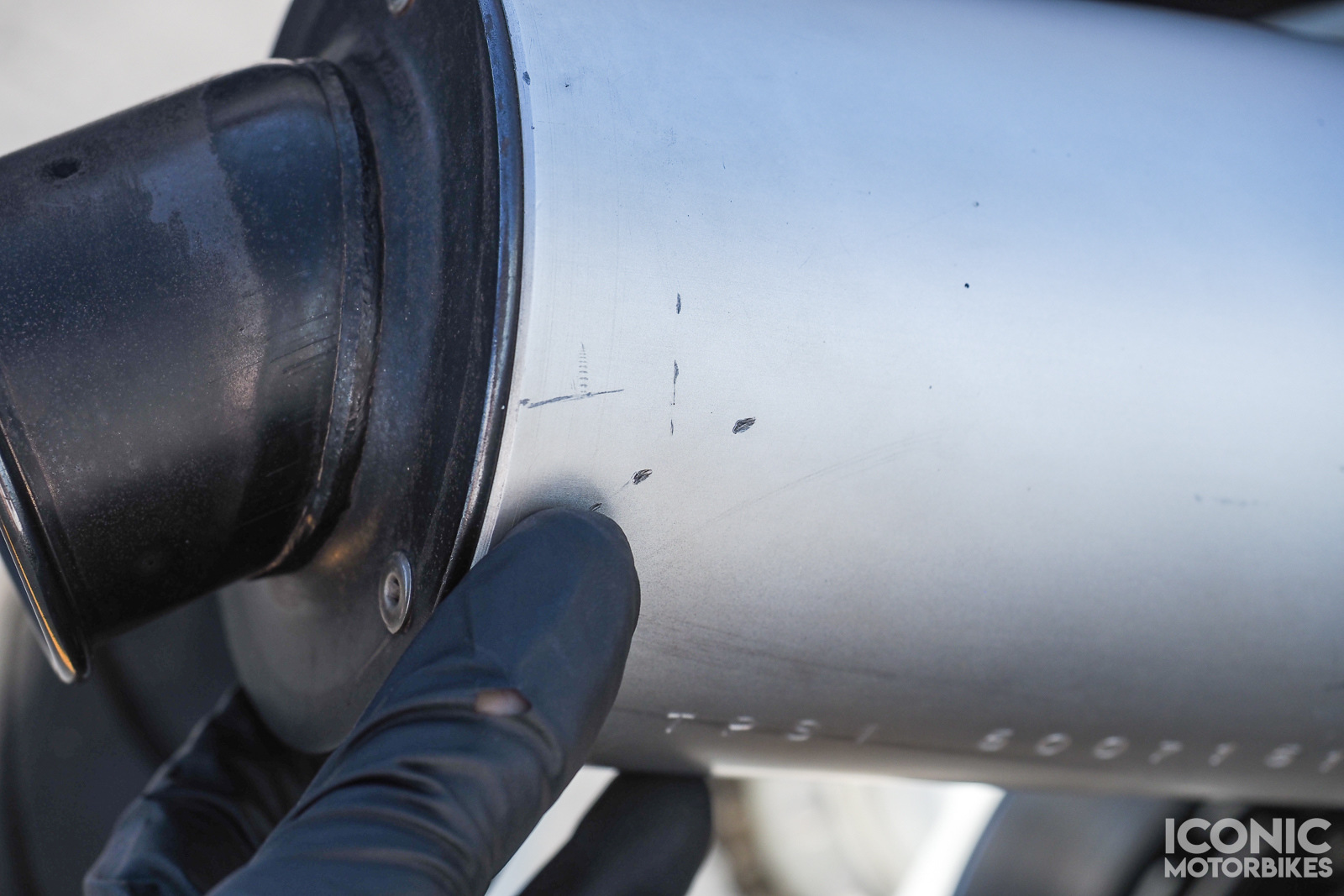 It is riding on Bridgestone Battlax BT56 tires which have aged out.

Currently located at our facility in Santa Monica, California, (please make an appointment for an inspection), this Bimota is offered on a clean Oregon title. Have any YB4 stories or questions about this listing? Let us know in the “Comments” tab!