Additional photos for this 1999 Yamaha R7 are available here for your perusal. Please let us know if you require any more photographs!

In 1999, Yamaha introduced its most advanced and race-ready production model ever with the YZF-R7, also known as the OW-02. Built in order to meet World Superbike Championship homologation rules, Yamaha only produced 500 units in total, and while it may have bore a good deal of aesthetic resemblance to its 600cc and liter-sized YZF-R-siblings, underneath its slick bodywork the R7 was an entirely different beast. 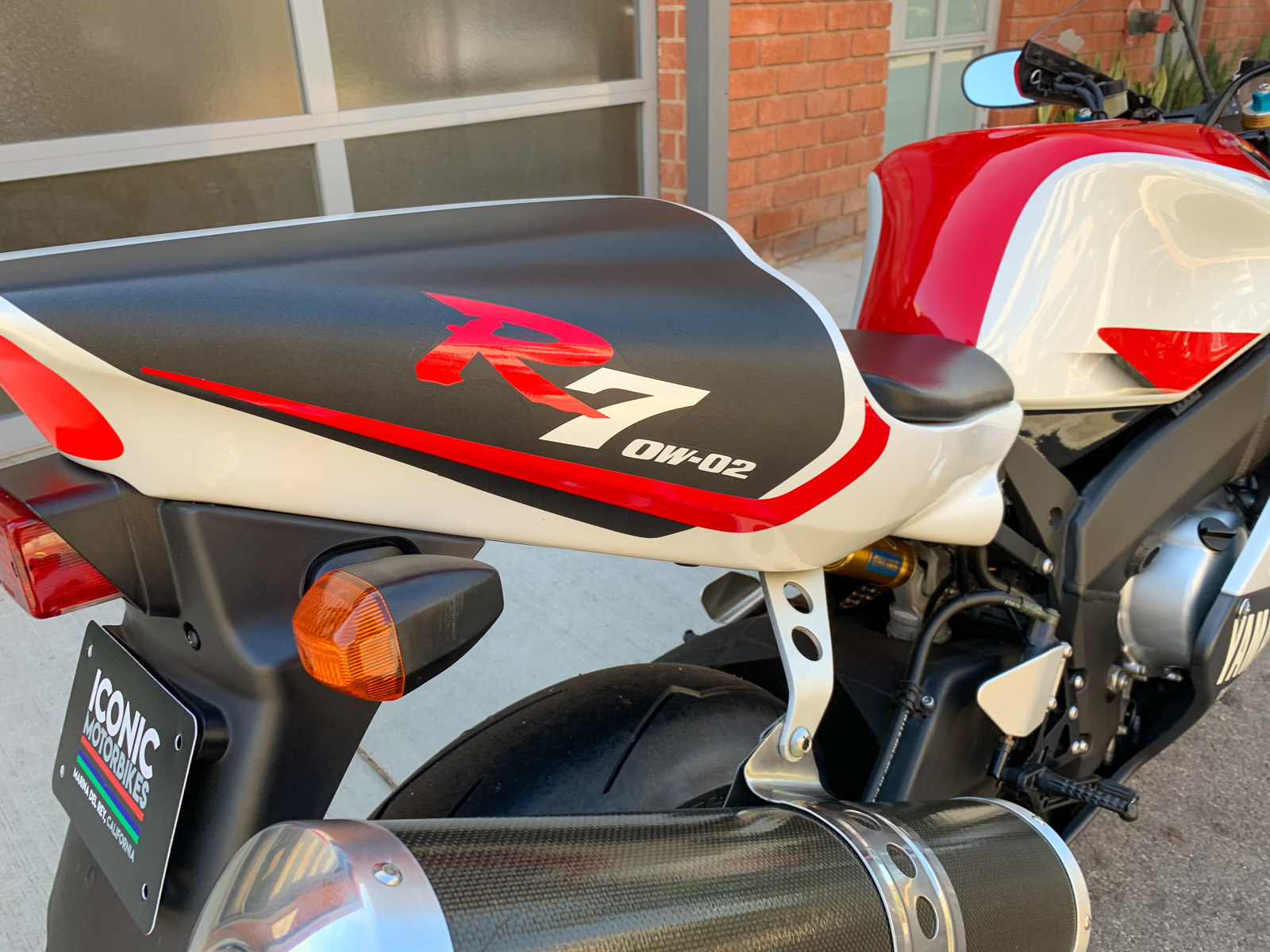 At the heart of the OW-02 was a liquid-cooled, 749cc, four-stroke, 20V, DOHC, inline-four engine married to a tri-axis, vertically-stacked race-style six-speed close-ratio gearbox with a wet multi-plate clutch with a “back-torque limiter” which acted similarly to a slipper clutch, keeping the back wheel from locking up under hard downshifts. 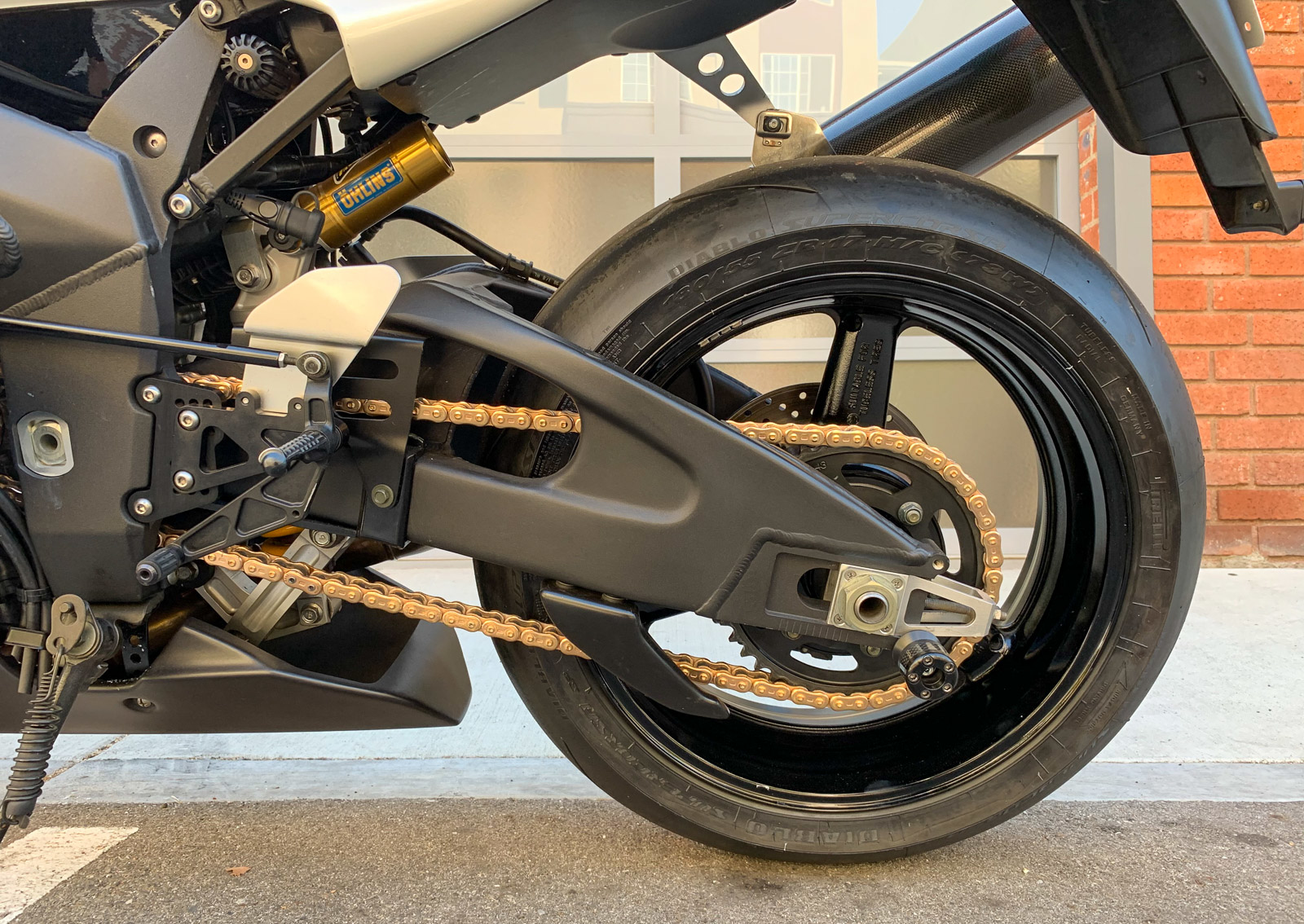 Right out of the box, the race-ready R7 only produced 106 hp and 53 ft-lbs of torque, though it was restricted in its street-legal form. Yamaha offered two special race kits for the OW-02; one for around a grand that bumped power up to 135 hp; and a second $12K kit that brought that figure to a staggering 162 hp. The three-quarter-liter YZF also came from the factory with pre-programmed race maps which could be used once the machine’s full potential was unlocked by installing the race kit’s wiring harness. These performance-bolstering kits were reportedly based on the YZF750SP, which in 1993 replaced Yamaha’s OW-01.

Housing the hopped-up lump was a shortened Deltabox II chassis that used the motor as a stressed member and was derived from Yamaha’s two-stroke GP racers like the YZR500. The race-bred frame was mated to 43mm inverted titanium nitrite-coated forks and a mono-shock, both of which are fully-adjustable top-shelf Ohlins items. The frame’s steering geometry and swing-arm pivot were also adjustable. Bringing the 416lb R7 to a stop were four-piston calipers grabbing a pair of 320mm discs, aided by a smaller single disc in the rear. 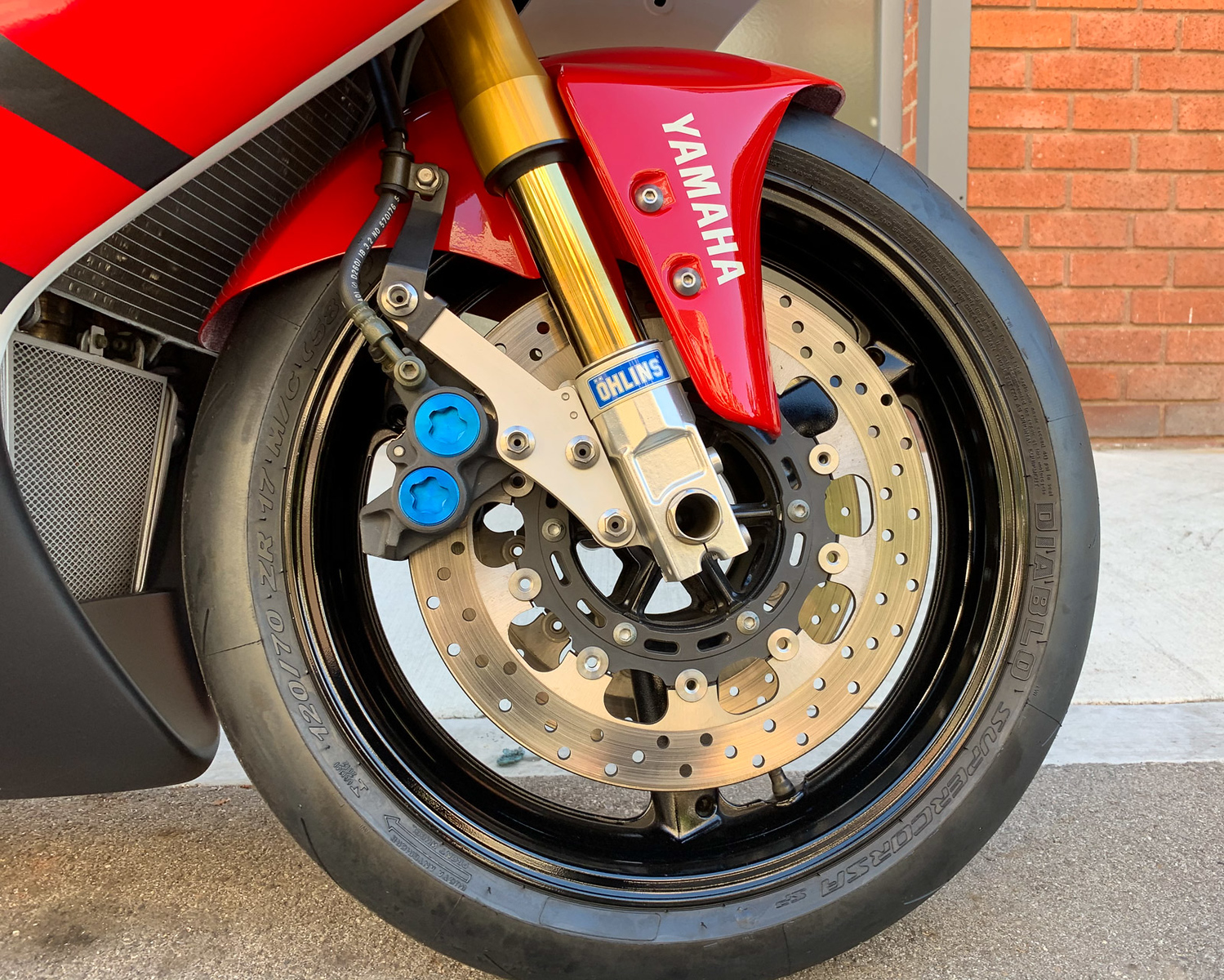 Of the 500 units produced — all of which were hand-built in Japan just like Yamaha’s factory racers — only 50 were sent to US shores and ten of those were set aside for Yamaha’s factory race squad while another 40 of the 500 specimens were shipped to the UK, and the rest of the regions that were blessed with the R7 could count their allotment by at most, a few dozen. Its exorbitant $32K MSRP (which translates to just shy of $50K today with inflation) which made it double the price of Honda’s RC51 SP1 — its closest competition.

Yamaha wouldn’t sell the fabled race machine to just anyone, and the demand reportedly exceeded the supply, with the tuning fork company supposedly only selling it to buyers that demonstrated their plans to race it. For this reason, very few if any specimens ended up in private collections on display, and the majority of known examples were raced into the ground, making finding a clean R7 today damn-near impossible.

And we say “near impossible” because today, we’re offering up one of these elite and seldom-seen street-legal, turn-key factory racers. This OW-02 example (VIN: JYARM011000000375) is one of the 40 R7’s officially imported into the United Kingdom, and after it was purchased it reportedly sat dormant for close to the entirety of its existence. Despite having left the factory a full two-decades-ago, this OW-02 example is in remarkably clean condition. 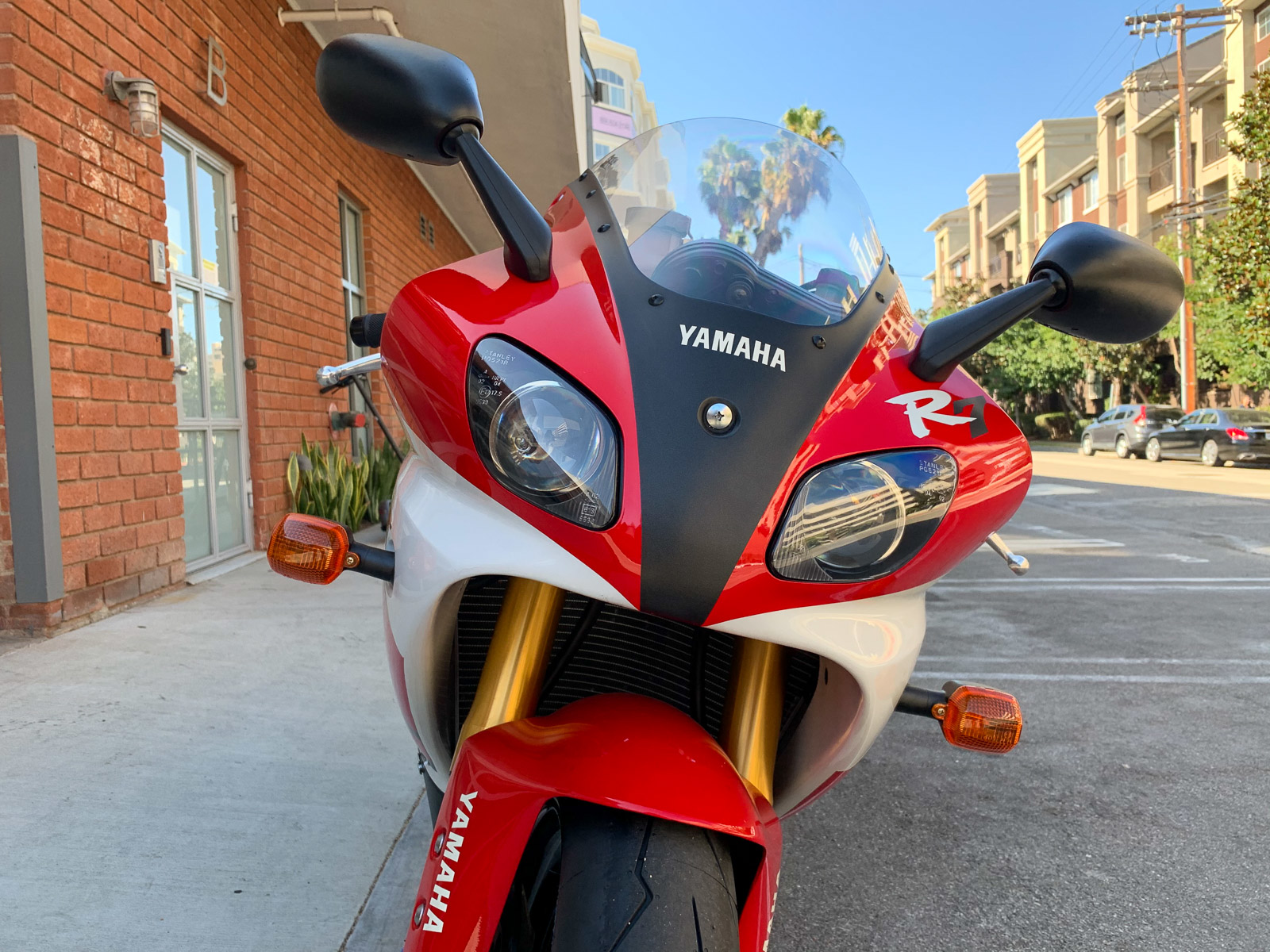 The homologation special Yamaha still wears its original livery which is in immaculate condition. The only imperfections to be found are a tiny mark on the right side of the swing-arm where it appears the track-stand missed the rear-spools, a minuscule blemish on the single-seat tail-section, and a barely-noticeable scuff on the exhausts end-cap, though the muffler’s carbon fiber remains pristine. The bike is being offered with a bill of sale only (and import documents).

Even by today’s standards, the R7 is still a wildly impressive motorcycle. Super Streetbikes Magazine included the YZF-R7 on its coveted list of “The 10 Most Exotic Bikes Ever”. The blacked-out frame was a direct nod to Yamaha’s Grand Prix racers, and the track-style monoposto seat further hinted at the R7’s true purpose. As far as golden-era superbikes go, it’s hard to beat the mighty YZF-R7, no matter what metric you use.