Click here for an CycleVIN Motorcycle History Report on this 2002 Mondial Piega. Additional photos are available here for your perusal.

Despite a wonderfully successful year of racing in 1957, FB Mondial announced the following year that it would end its factory program. Still, many privateers continued to campaign Mondials, as they were still very competent and competitive machines. So much so in fact, that Soichiro Honda reached out to Boselli, asking if he could buy one of FB’s old DOHC 125cc GP racers, in an effort to kickstart Honda’s own race program. The Count obliged and sold Honda a 1956 Bialbero. The Bialbero was crated up and shipped to Japan, where Honda’s crack team began reverse-engineering the four-stroke single. Honda proceeded to develop a series of engines based on the Mondial mill under the direction of Kiyoshi Kawashima, leading to the bevel-driven DOHC parallel twin-powered Honda RC141, and then the RC142. By 1959, Honda was competing at the TT, and the rest is history.

Today, Big Red still has a 1956 Mondial 125 on display at the Honda Collection Hall in Motegi, representing the pivotal role the now-defunct boutique Italian marque played in the history of the history of the Japanese powerhouse. Management and personnel came and went at Honda over the years, though the company never forgot about the help its race department received from Mondial. We’ll come back to that soon… 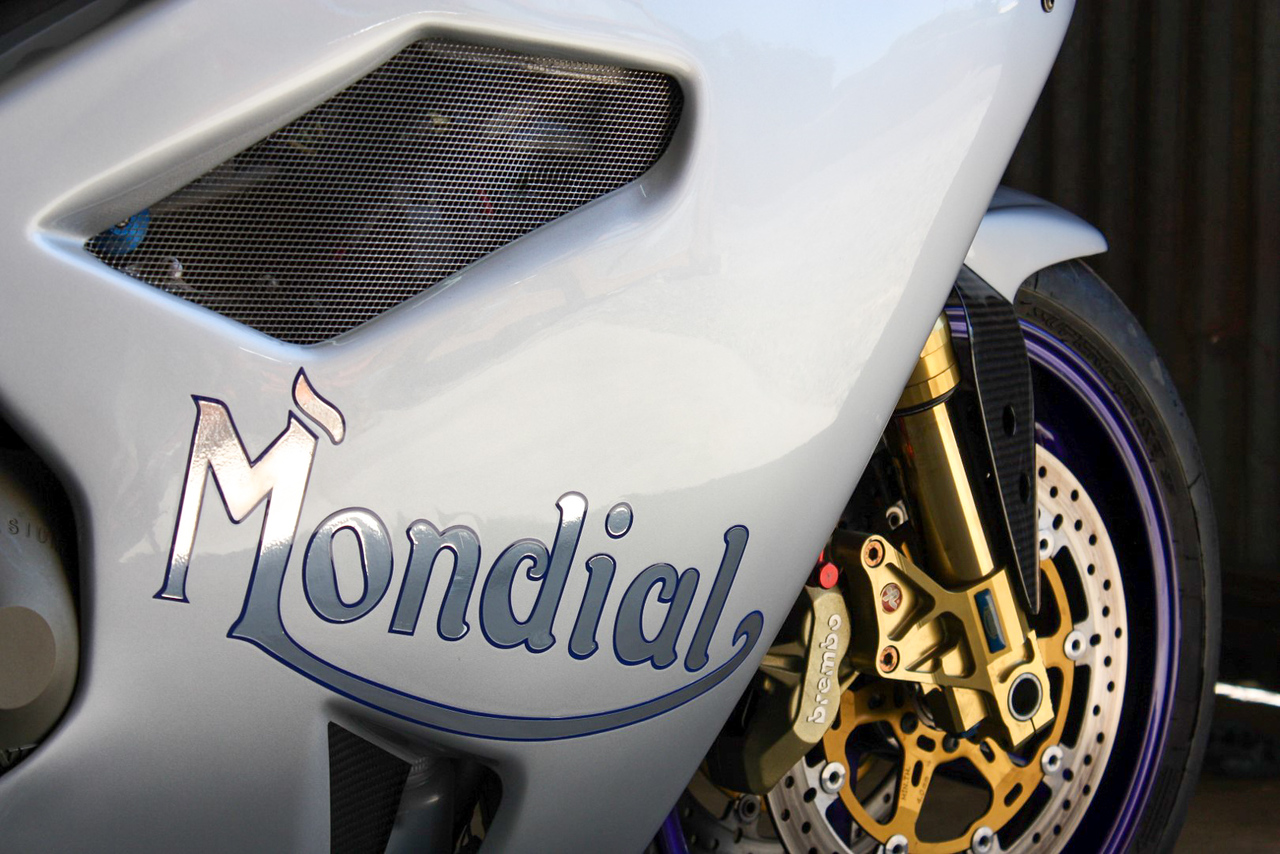 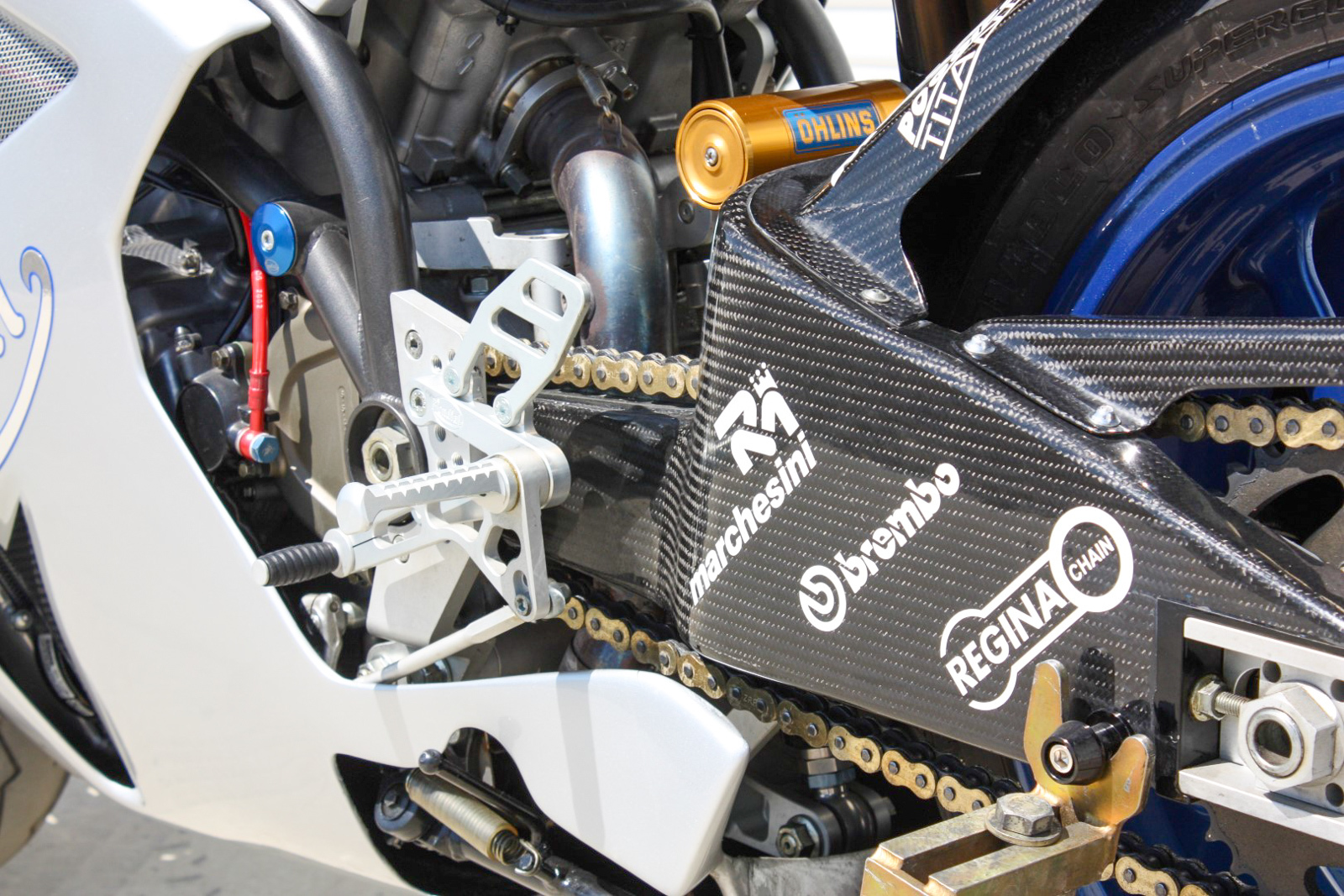 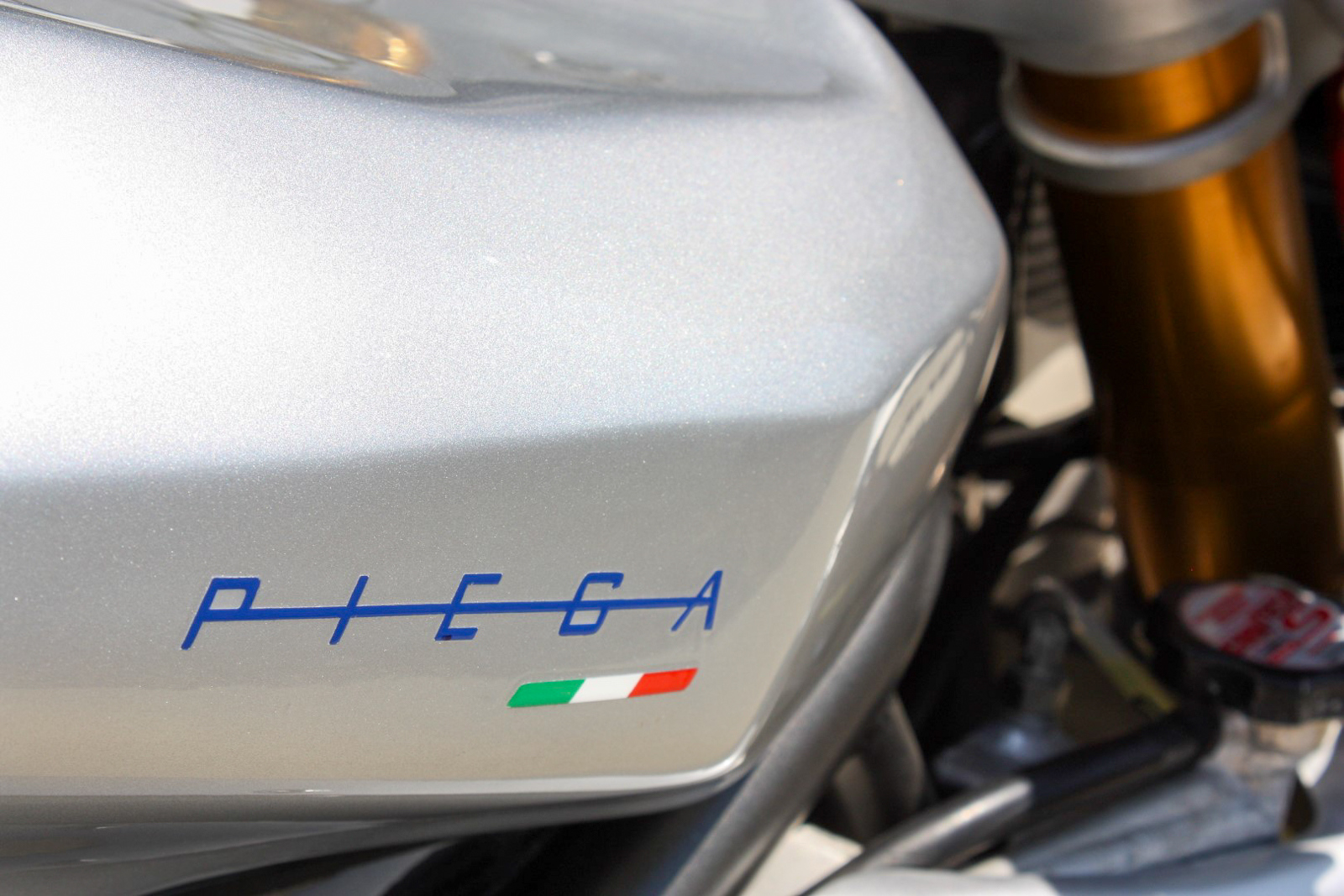 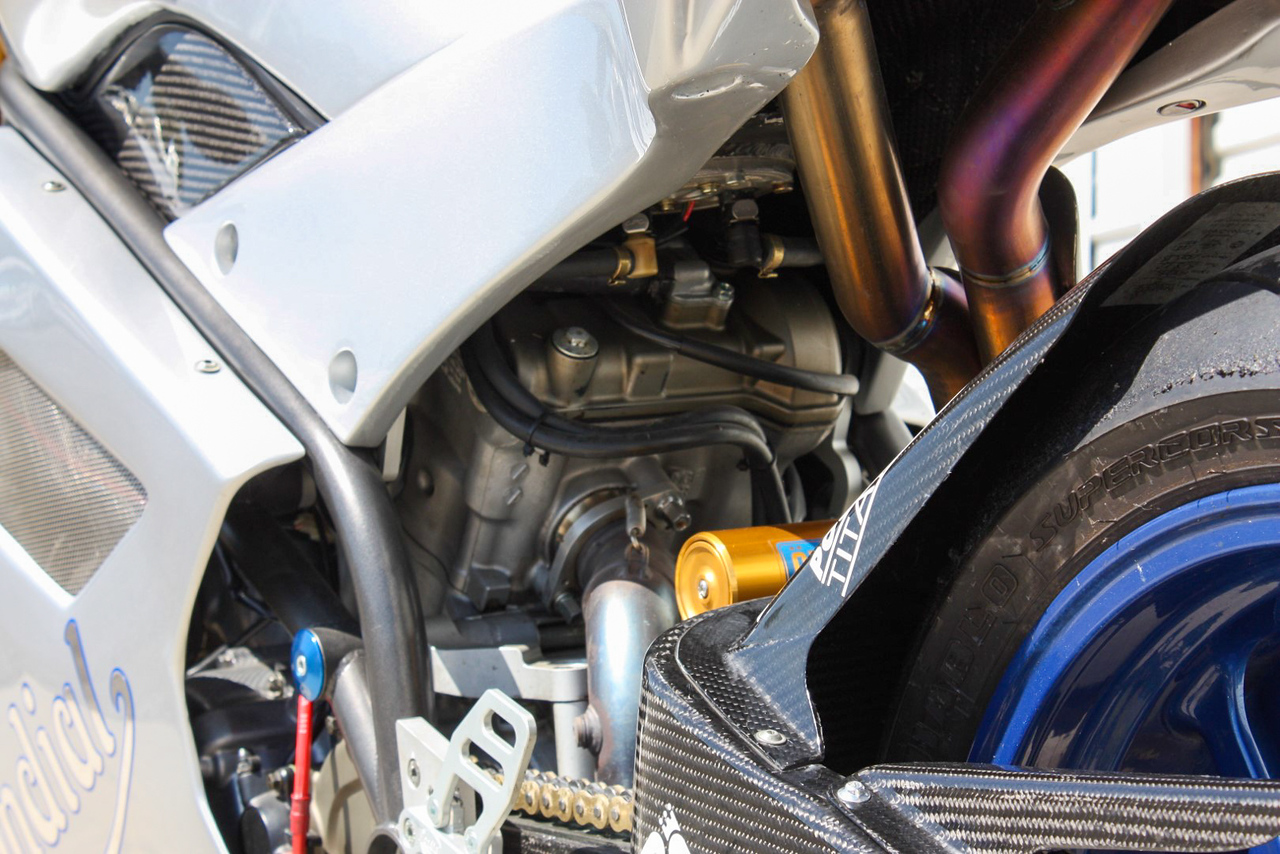 While that wasn’t a huge bump in power, the Mondial had less weight to carry, tipping the scales at just 390 lbs dry. That not only makes it 42 lbs lighter than the RC51 (and 20 lbs less than the 999), but also the lightest sport bike in the liter-sized V-Twin class. This class-leading number was possible thanks to every ounce on the two-wheeler being thoroughly scrutinized. Adorned in Mondial’s classic silver and blue race livery, the bodywork was entirely made from carbon fiber and built by Carbon Dream.

Not long after the Piega made its public debut, it entered limited production. Unfortunately, Mondial just couldn’t make ends meet, and despite a solid effort the company was forced to declare bankruptcy in the summer of 2004, by which point only 35 Piegas had been built. Eventually other parties entered the picture, stepping in to buy out assets and IP and relaunch production of the Piega. The second time around, the new owners succeeded in churning out another 120 units before their operation also went under.The very few examples that were produced were quickly snapped up, with most specimens ending up in private collections. Supposedly, some of the employees who worked for Mondial prior to it declaring bankruptcy claimed they were never compensated for their work, and around a dozen Piega examples were reportedly stolen…and remain at large! While Zilletti and Boselli had good intentions and were able to deliver an excellent motorcycle, luck just wasn’t on their side.

This example (VIN: ZA9SP102PG7100030) was originally ordered by and sold to Grease Monkey in Yokohoma, Japan. It is one of the original 35 that were built.

Per the seller, it was originally ordered without the blue stripes.

While in Japan, the bike “suffered an accident.” The seller acquired it five years ago and “personally completely disassembled the bike and went through every part of it. Original replacement parts were sourced from Italy, the upper radiator, front wheel, front brake rotors and right rearset were replaced. The tank, tail and both lowers were repainted to touch up scratches, the upper cowl is original paint.”

“The triple clamps were straightened by GP Frame and Wheel, the forks were checked and were straight. The entire bike was taken to GP and checked for straightness, all the paperwork with numbers is available and will go with the bike.” 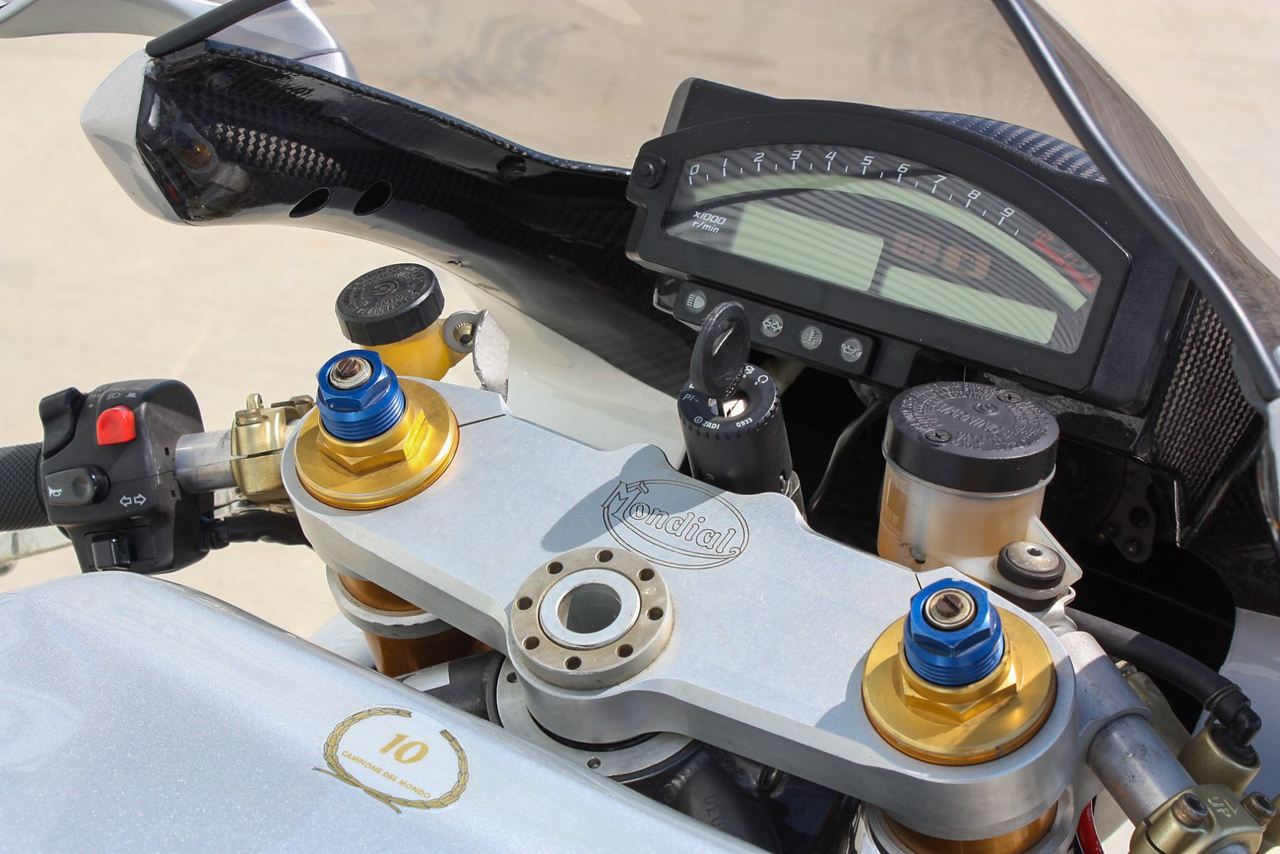 “I have since put over 700 miles on the bike, including a track day at Thunderhill Raceway, and the bike performs flawlessly, goes straight, stops straight and handles as it should.”

The Pirelli Diablo tires have 700 miles on them, which is how many miles the seller has covered with this machine. The odometer now shows 2,742 kilometers (1,703 miles).

During his ownership, he’s cleaned the injectors, changed all fluids, installed new NGK plugs and a Regina chain. 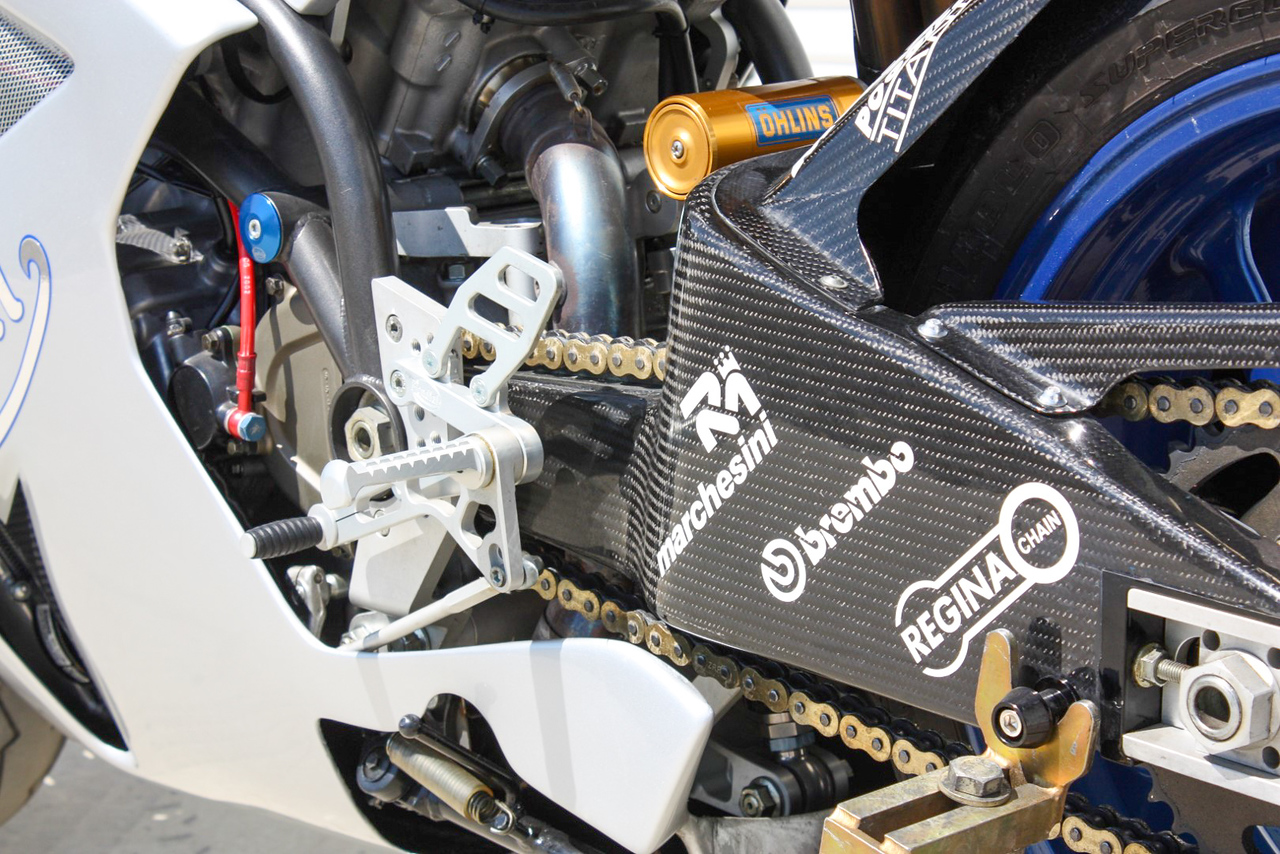 It is stock and comes with the original invoice paperwork, build sheet from the factory, and invoices for all replacement parts. The sale includes the original Mondial owners manual, commemorative large picture book from Mondial, and some decals and patches. 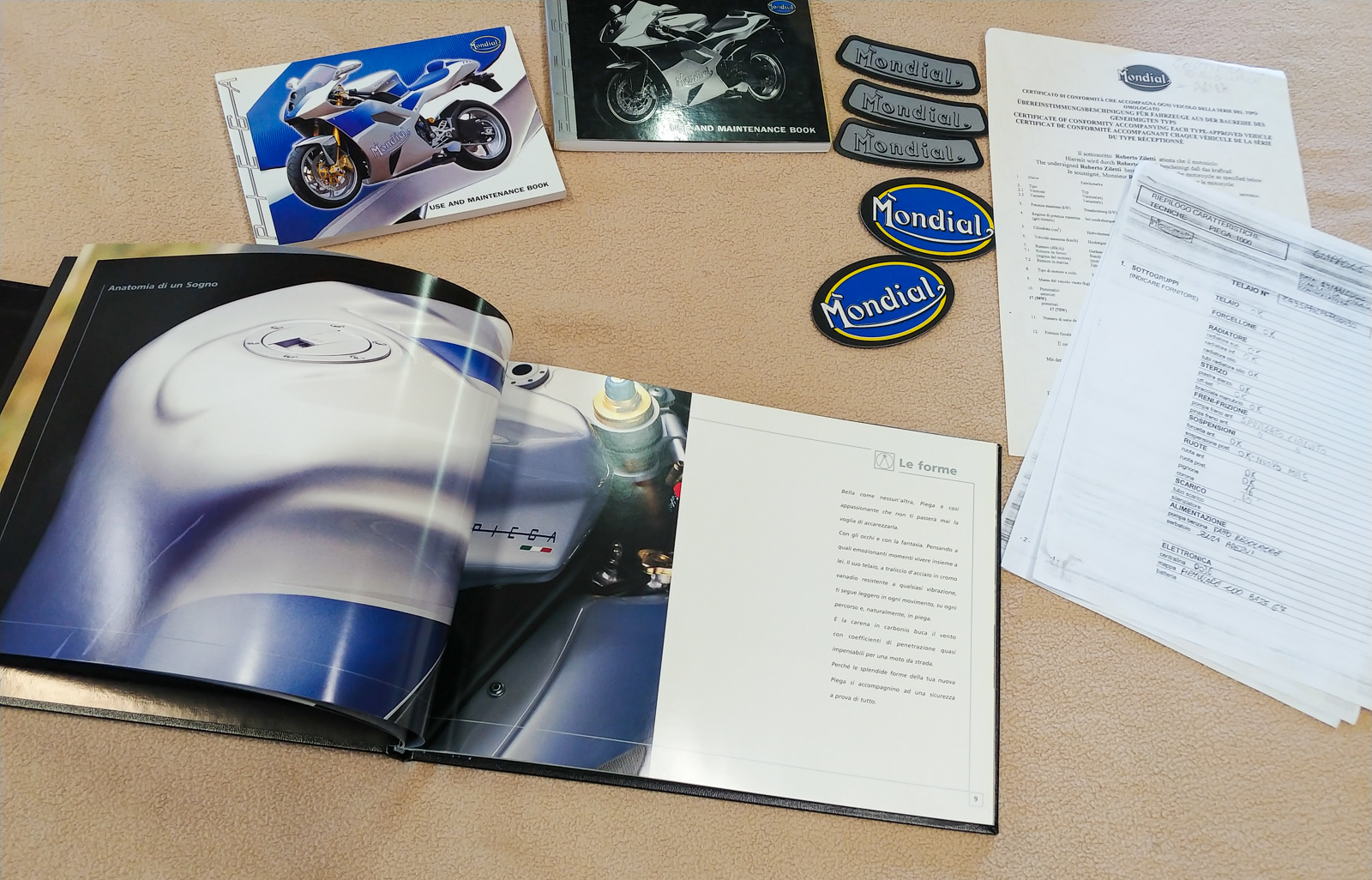 The book includes a DVD with a video that Glenn was kind enough to upload:

The seller notes two cosmetic issues: slight rash on right fork lower and two small dings in the frame near the steering head. 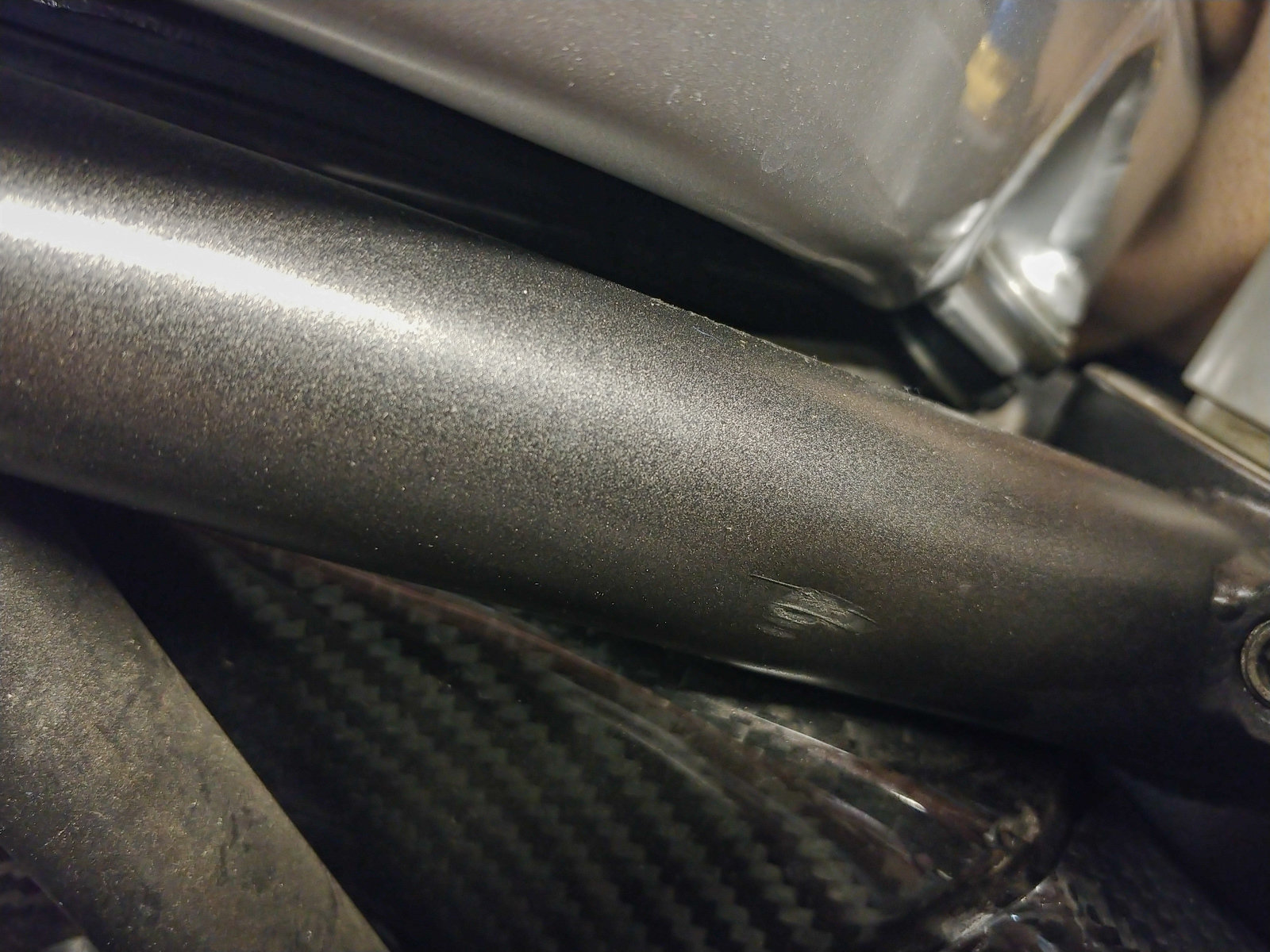 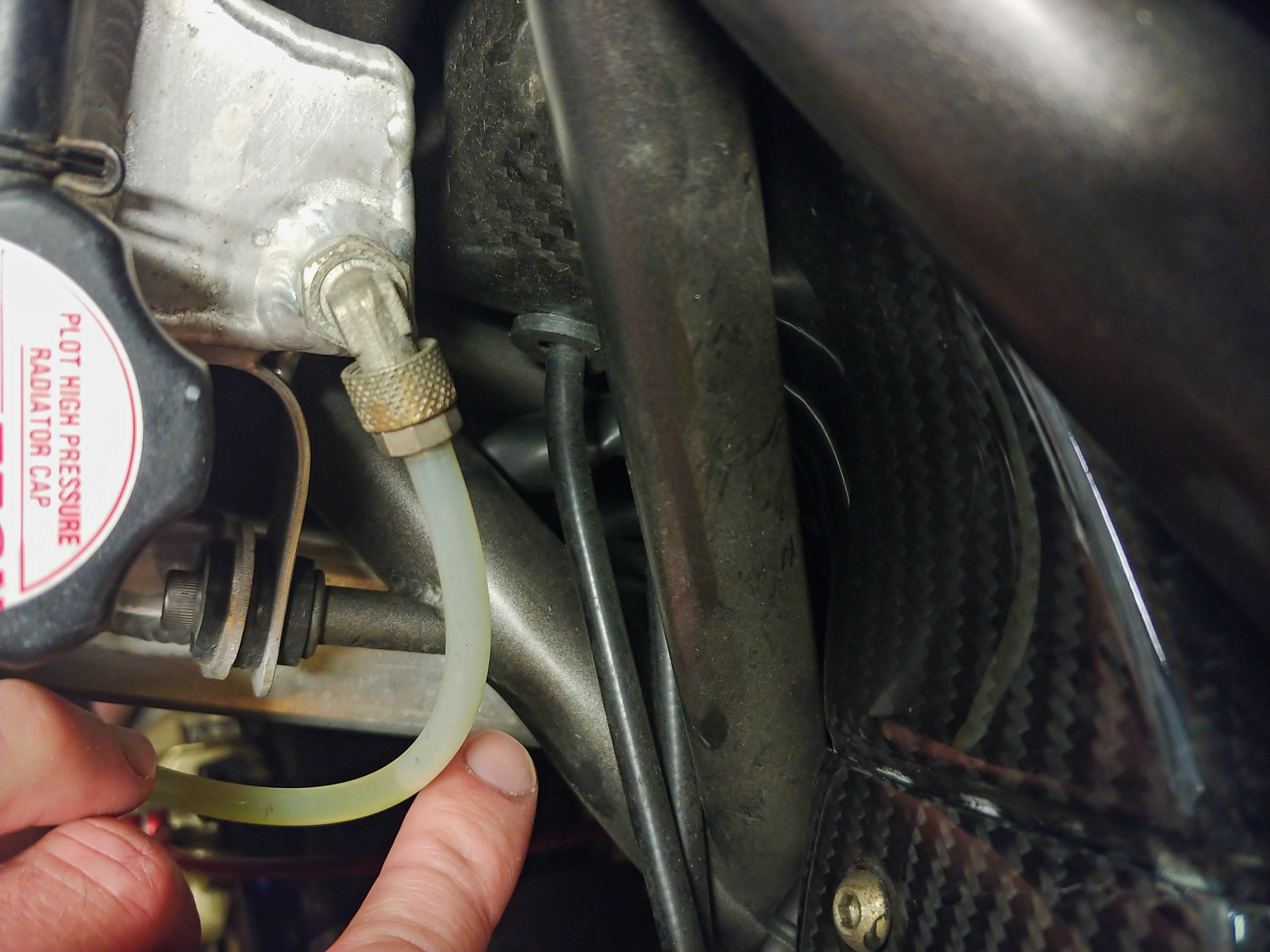 We also see that the front wheel does not match the stock color – this one has a purplish tint to it. 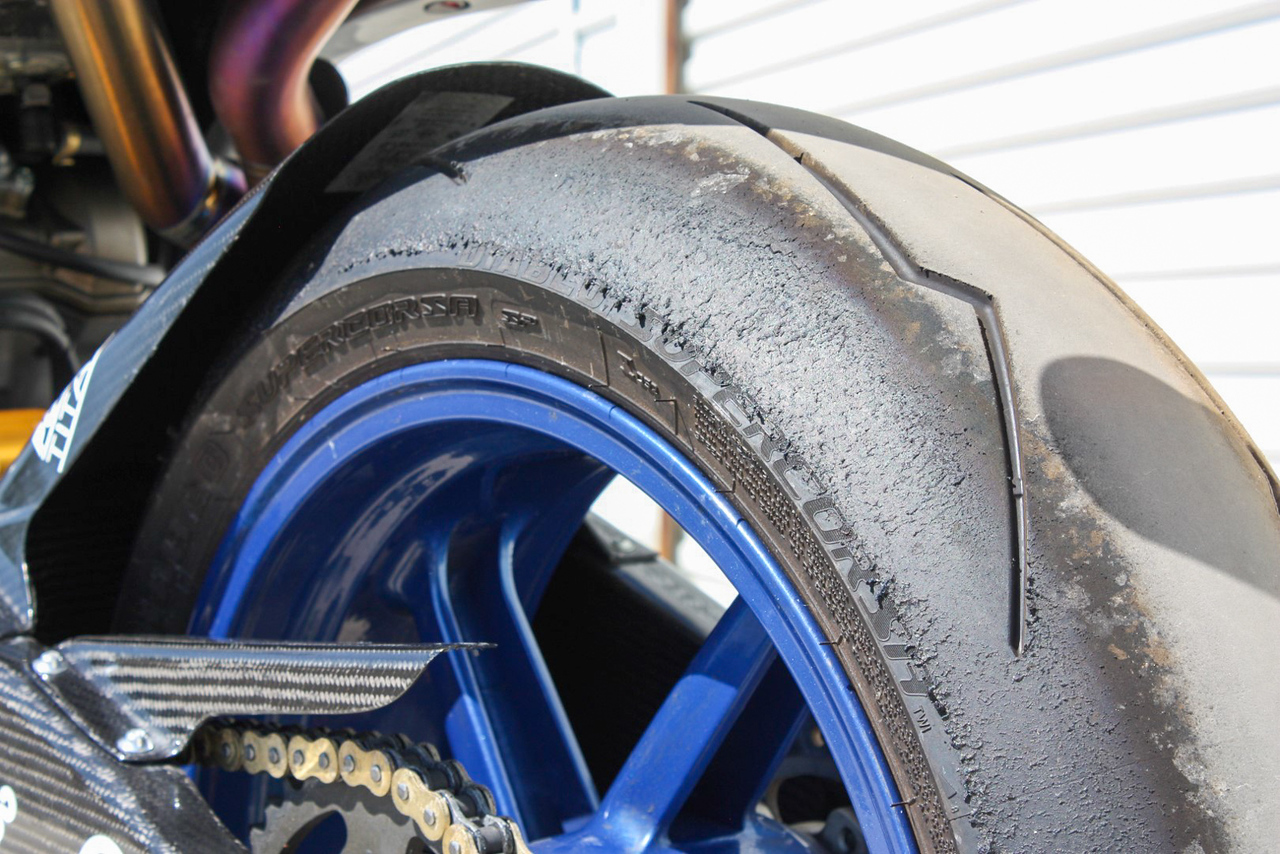 There are no mechanical issues – this Piega just needs someone to keep riding it!