Here at Iconic Motorbikes we’re lucky to get seat time on some of the greatest (or should we say, most iconic?) motorcycles ever made. We thought it’d be fun to share our experiences with these legendary machines.

Here’s three things you should know about the Honda NR750:

1.) This bike is terrifying.
It’s easy to exaggerate when it comes to bikes like this, but I don’t use the word “terrifying” lightly. Some bikes earn that descriptor because of the overwhelming horsepower. With others, it’s the lack of handling (there’s a reason why a few two-wheelers have been blessed with the nickname of “Widowmaker.”) With the Honda NR750, it’s the combination of price and rarity.

For example – on a previous NR750 that we had in for service, the owner asked us to track down a NOS set of heel guards. It took us 6 months and cost the owner about $1,000.

Or how about the titanium-coated windscreen? The one on this bike has a few scratches after 30+ years of life, but the only still-new replacement we’ve been able to find is in China and the seller wants $4,000.

Heaven forbid you need some fairings. The upper bodywork is just one piece, and it’s No Longer Available (NLA). We found one in another country – the seller said he’d take $8,000 but later decided that wasn’t enough to part with his treasure.

Also NLA? Valve cover gaskets. We’ve got a Euro-spec version in for service right now, and our head mechanic Steve the Professor has to be VERY careful!

No one ever wants to crash. But on this bike? I really didn’t want to crash.

2.) Everything you like about bikes nowadays – the NR750 did it first.
That’s quite a bit of poetic license, but you might be surprised about what the NR converted from designer’s dreams to the public.

Ask your motorcycling buddy who his favorite designer is. A staggering percentage of them will say, “I don’t know,” but the majority of them with answers will likely respond with “Massimo Tamburini.” Why do I bring that up? Because Tamburini – who penned the Ducati 916 and the MV Agusta F4, among other icons – eventually admitted that he borrowed styling elements from the NR750 when he created the legendary 916. From a great interview in Sport Rider: “When I saw the NR750 in Milan I thought it was going to be the future of motorcycling. I didn’t want to copy it with the 916 but I wanted the 916 to look like it with sharper lines. At that point we had been experimenting with other exhaust positions, to the side of the bike like the 888 and at different heights, but when I saw the NR I tried under the seat and it felt right..”

Tamburini doesn’t explicitly mention anything beyond the exhaust, but plenty of other people suggest that the NR’s single-sided swingarm and dual headlights (not that Honda was the first to do either) also heavily inspired the Ducati’s design.

All these styling cues have become mainstream (underseat exhausts have since fallen out of favor as they cook the seat and raise the center of gravity), but there’s a couple of tricks that you still don’t see today. To help with aerodynamics, the side stand has two individual pieces of carbon fiber on hinges that fold with the stand to fill up as much of the bellypan as possible. Slick. 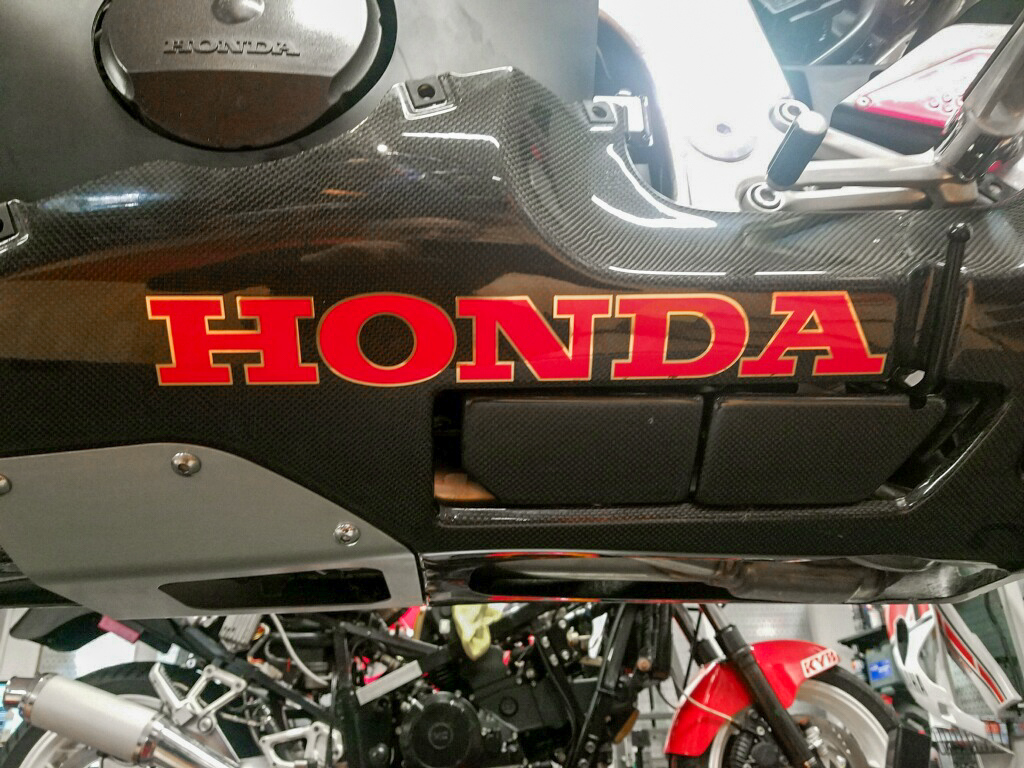 You’ll also get carbon fiber inside the key. Modern keys should be cooler!

Honda had a hell of a lot to be proud of with this machine, right?

3.) It feels like an endurance racer.
This is a JDM machine, which means it’s restricted to about 75 horsepower versus the 125 that the rest of the world got. That much power pushing ~540 pounds means you’re not going to be overwhelmed by acceleration. But once you pick up the velocity you’ll be blown away by how well the NR handles at higher speeds. At slower speeds you have to muscle it around a bit to make up for the weight, but get some momentum going and you’ll be rewarded with stability that ignores road imperfections and makes you feel like a hero.

The suspension is magical – it’s somehow simultaneously supple and sporting (how’s that for alliteration?), and even these ~30 year-old suspenders are better than most of the non-electronic suspensions I’ve tested in bikes released this year. Pick a line and the NR will hold it without fuss. I don’t understand how it’s possible or which engineer at Honda sold his or her soul to the devil. 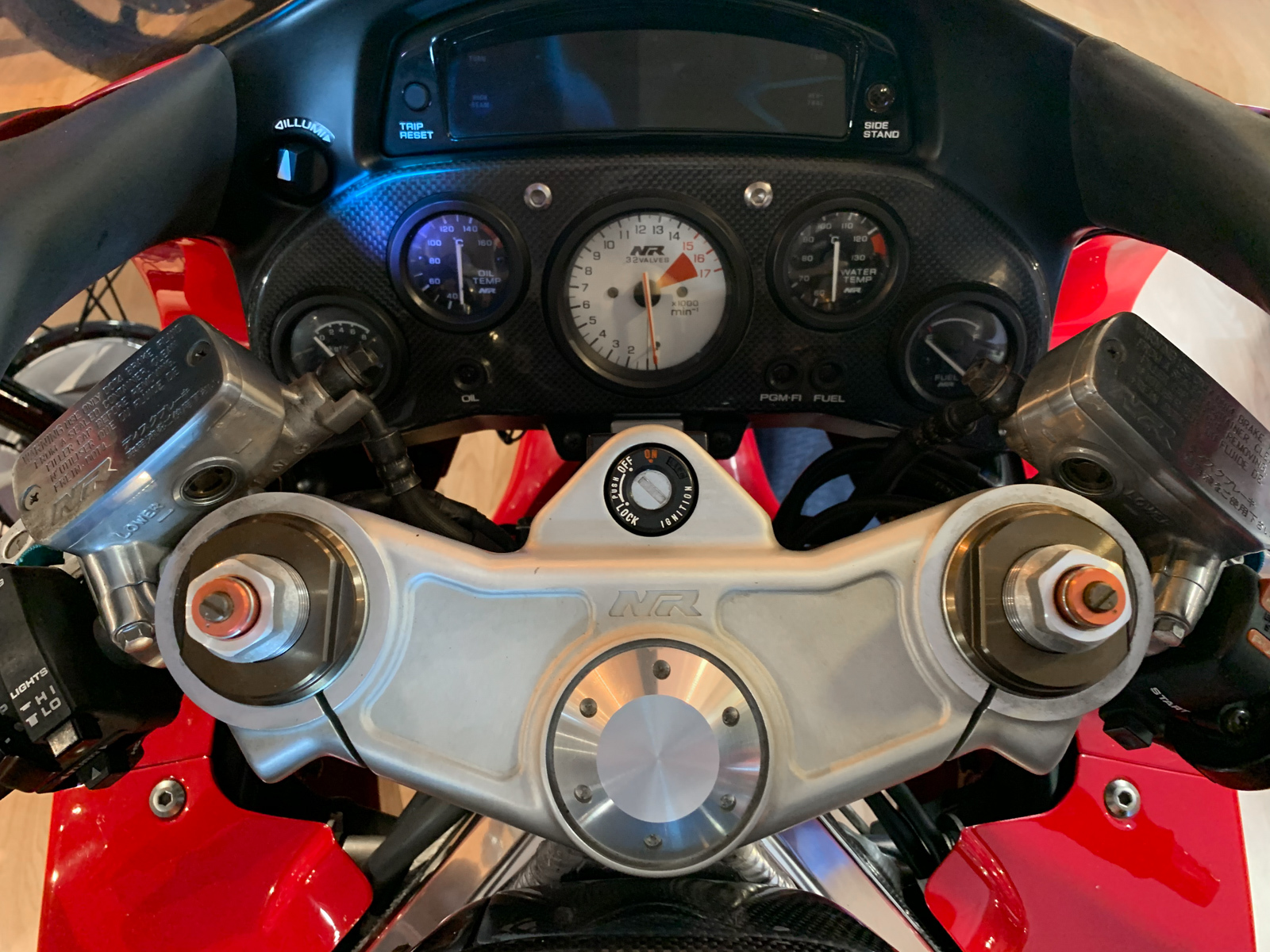 You already know that the NR captures everyone’s attention when it’s parked: Adam proves that each time he takes one out for a Sunday Ride out to the Rock Store when everyone comes up to ask “is that the oval piston bike?” But what you might not be able to tell when it’s stationary is how much of a joy it is to ride. Yes, there are quicker bikes out there (especially compared to the 75 hp JDM version), and the oval piston design hasn’t stood the test of time, but the power delivery is nearly as linear and smooth as an electric motorcycle. There’s plenty of torque and the transmission is silky smooth.

I review plenty of new bikes and it’s impossible to know how well they’ll hold up over the years. But nearly 3 decades later, the fit and finish on this NR is still top-notch. Plus, the projection dash reminds you that you’re riding something futuristic (for 1992). How often can one say that they’re riding a piece of history?

My biggest complaint is with the exhaust – it sounds like a commuter, not race-inspired exotica. But don’t you worry – we’ve got another NR coming in soon and Graves is going to make an exhaust for us so that it truly sings. We can’t wait to share that with you! 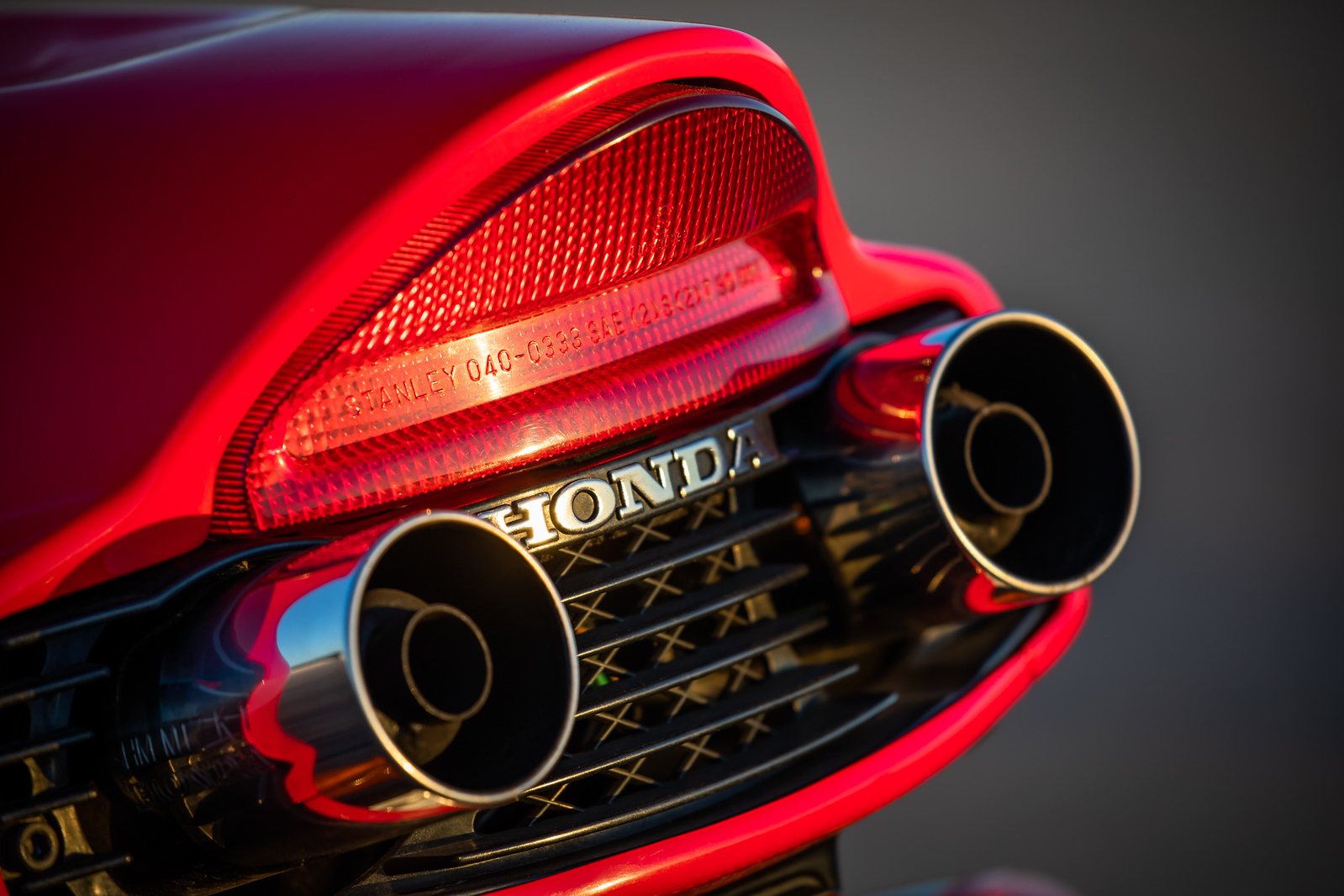 I hope you enjoyed this brief look at the NR – I’ll let Ferris Bueller wrap things up:

Photos by Nathan May

We also know of a few more with miles, so if you want one of these in your collection, drop us a line: concierge@iconicmotorbikes.com!