Menu
Five months ago I had the chance to ride one of the first RS660s that came into the US. Despite some pre-production issues, I loved it…and it made “me incredibly impatient for the Tuono 660.” Well, my wait is finally over! Let’s take a look and what’s good, what’s bad, and what’s iconic about Aprilia’s newest motorcycle!

The Tuono has a long history, but one thing has remained the same – the it’s always been a liter bike. That changes for 2021, as the Tuono V4 gets a little brother. The creation of the Tuono 660 was a given once the RS 660 was announced, and the Italian firm hopes that both of the 660s will fill a gap in their worldwide offerings, particularly in Europe and Asia. They also hope that the 660 platform will attract new riders in the US who weren’t comfortable with the fact that Aprilia’s smallest bike in America was a 900, not to mention experienced riders who value low weight over extreme power.

WHAT’S THE SAME?
In lieu of rewriting the entire RS 660 review to tell you all of the things that are identical between the two bikes, here are the basics that you need to know:

Brakes and Tires: Full Brembos – both master cylinders, radial-mounted 4-piston calipers up front on a 320mm disc and twin-piston caliper in the back on a 220mm disc with steel-braided lines throughout. OEM rubber is the very sporty Pirelli Diablo Rosso Corsa IIs. I’m glad these are shared, because the brakes and the tires are both fantastic and I have nothing negative to say about them.

I could also list the frame, the dash, the electronics suite, the seats…you get the idea. Let’s just focus on how they differ!

WHAT’S DIFFERENT?
Aesthetically, the big change is the front fairing. There’s much less of it, though there’s still a lot for a bike that Aprilia calls a “naked.” Also noteworthy is a change in colors. Concept Black and Lava Gold (+$200) remain, but Lava Red (one of the best motorcycle colorways in years) has been replaced by Iridum Grey. This bums me out, and I’m currently on the fence about if I’d go with Grey or Black. This is the Tuono’s first strike – I thought the RS 660 was gorgeous, but a little bit of that magic is missing with this bike. A lot of it for me is the garish plastic red base layer found on two of the three colors. I’m not sure it makes sense to draw more attention to the background than the foreground, and it adds too much visual weight to what is supposed to be a “naked” bike. I think the first layer of bodywork looks much better in black, as found on the Acid Gold livery (but it’s a bummer that the Acid Gold doesn’t have the sweet “a” logo on the front).

Not as obvious as the red base layer is a swingarm guard, but I assure you that the lack of one would be noticed just a few weeks into ownership. At the RS 660 launch, some of my colleagues were putting marks like this on the swingarm in just 100 miles of riding.

I said that it “looks like the aftermarket will need to produce a guard“, but Aprilia has taken care of that themselves on the Tuono. It’s not the sexiest thing in the world, but it’s definitely a good call in the long term.

Functionally, the big change is the presence of handlebars where there used to be clip-ons. Aprilia’s thinking is that the Tuono will be used as an all-arounder, and as such they’ve blessed it with bars for upright ergonomics. 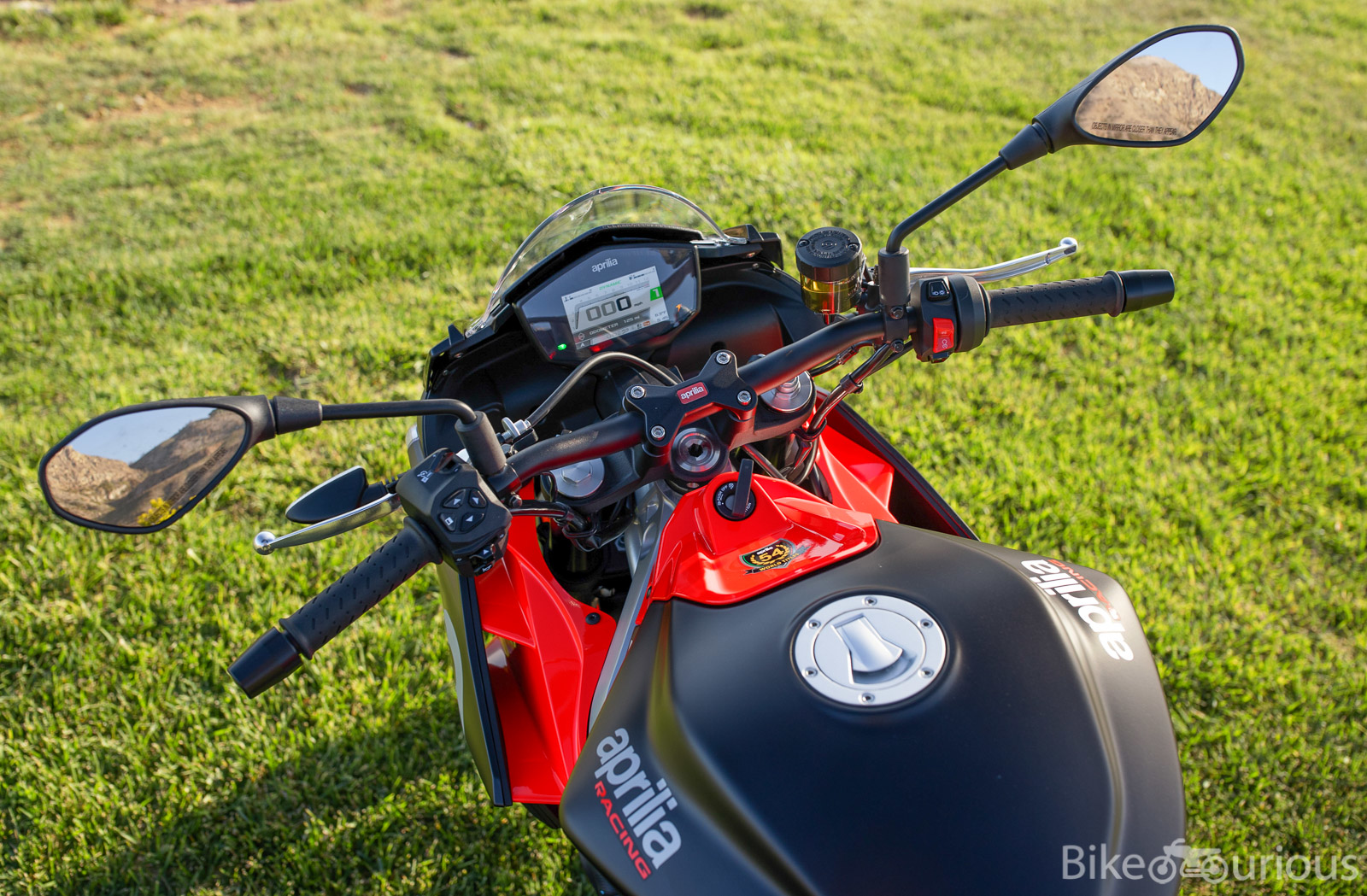 When I asked you what you wanted to know about this bike, Roger specifically asked about the ergonomics for a 6’2″ rider. Lucky for you, I’m 6’2 – so here’s a photo of my rider’s triangle while the world goes by. Feel free to compare to a similar shot of me on the RS. Aprilia wasn’t able to confirm the exact difference of where the grips on the Tuono compared to the RS, but I’d guess 1.5 inches up and maybe an inch back (with straight bars vs. the rotated clipons). With a little protractor action I estimate that I had 35 degrees of forward lean on the RS and 25 degrees on the Tuono – it’s definitely noticeable when you sit on both bikes back to back.

The seat height (32.2″/820mm) and shape remain the same, as does the location of the pegs. However, the Tuono gets rubber inserts in the pegs for a little more comfort. 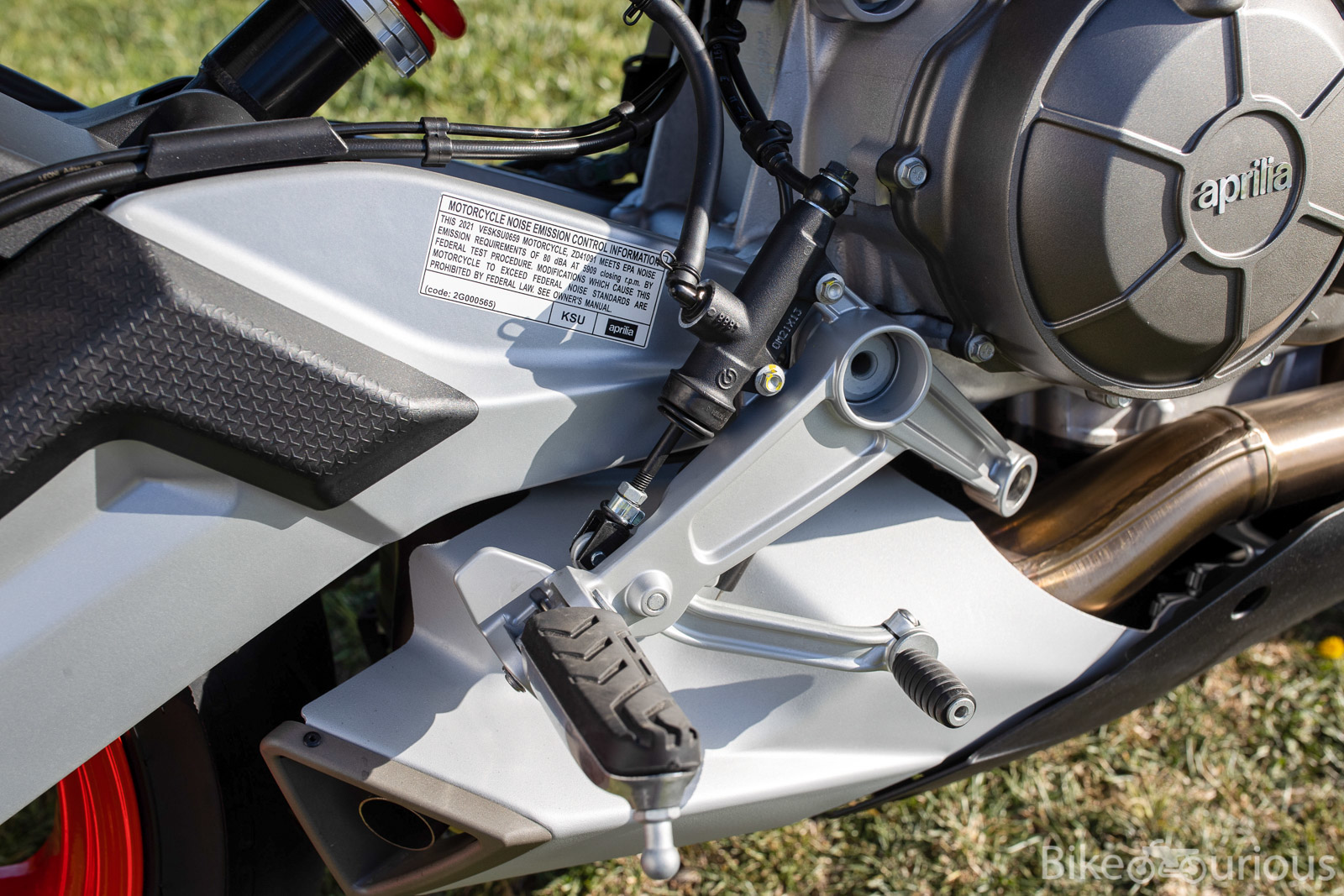 From a handling standpoint, the bars are preferable to me in just about every situation except fast sweepers. It’s an absolute joy to maneuver at any legal speed because of the ample steering lock and the leverage afforded by the wide bars, but Aprilia’s secret ingredient is the weight (or lack thereof). A couple of years ago, I stopped caring when manufacturers boasted about another 5-10 horsepower in their model updates because it frequently came with a larger engine and another 20 pounds of weight. Older, wiser Abhi wants minimal weight and I’m willing to give up a couple of ponies for that – the Tuono’s curb weight of 403 pounds makes it easy and fun to work with.

Those of you that have ridden the pairing of a sportbike and its standard sibling know that typically, the latter is decontented to some degree. Aprilia is not immune to that as the Tuono 660 gets a little less love in the front suspension. The RS has adjustable suspension elements (preload and rebound) in both forks. With the Tuono, the left fork leg is non-adjustable and the right fork leg is adjustable for preload and rebound. It also gets 10mm less travel (110mm vs 120mm), which is the opposite of what I’d expect when it comes to a sportbike vs a standard. I only noticed the performance decrease when I was really hustling, but that’s when you don’t want to notice an issue, right? I was hoping for a little bit more as I thought the front suspension on the RS was great, but one can’t forget that the RS puts more of the rider’s weight over the front end and helps keep it planted. 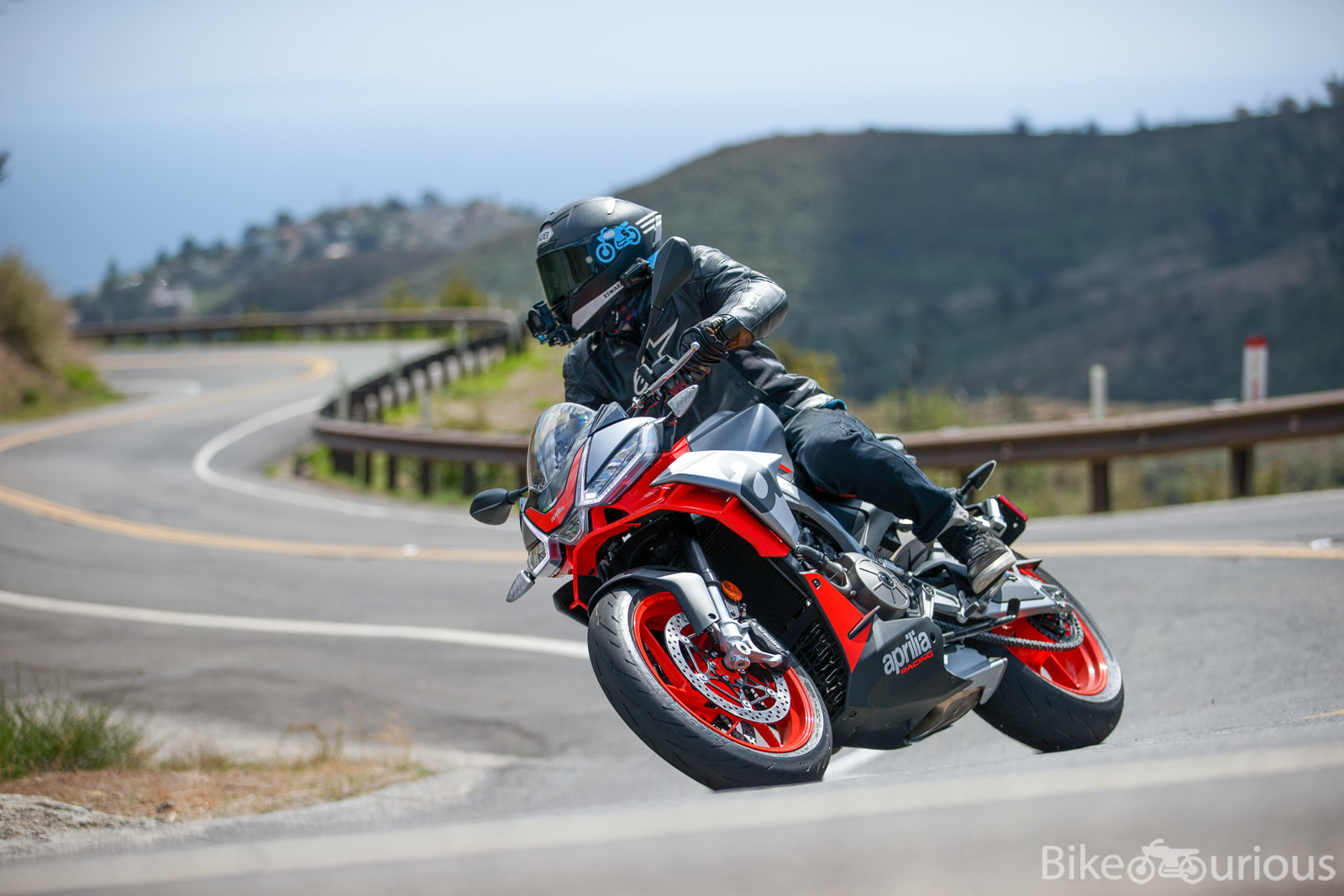 So the front suspension isn’t as good at the limit (and weirdly, the Tuono gets a lead-acid battery instead of the lithium-ion unit in the RS), but I’m nitpicking when it comes to the price and what this bike is designed for because Aprilia generally nailed it with this bike. For me, the most important thing about a motorcycle is that it’s fun, and the Tuono absolutely checks that box. But practicality is a close second, and I love that Aprilia made this bike easy to live with thanks to the comfortable riding position, four gallon tank (Aprilia claims 48 mpg), optional luggage, rack under the passenger seat (sorry that I forgot to get a photo of that for you), and even standard cruise control. Also nice – the fairing-mounted mirrors on the RS got real buzzy at highway speeds but I barely noticed that on the Tuono’s handlebar-mounted mirrors. When the 660s were first announced, Aprilia stated that they would be offering a tank bag (8-12 liters), tail bag (30 liters), and semi-rigid panniers (36 liters). The first two options are currently available on the website, however Aprilia reps told me that the panniers had some production delays and it’ll be at least a few more weeks before those are available so I don’t have photos of them for you yet.
SO WHAT’S THE STORY?
When it comes down to it, I only have two gripes with the Tuono. One is serious, and it caught me off guard – there’s a significant flat spot from 5k-6k rpm. The reason it surprised me is because I didn’t notice a flat spot at the RS 660 launch, and I have to admit that I cannot figure out why. My first guess was that the RS had a different map because we were on pre-production units, however an Aprilia representative confirmed that the fueling was the same as the production bike, which eliminates that theory. The only other idea I’ve got is that the RS launch was done on the fast sweepers of Highway 33, which meant I was spending most of my time high in the powerband. The tight twisties of Latigo Canyon got me low in the revs in first and second gear, and that meant I was frequently feeling my a lull in my momentum as I accelerated through the 5k-6k band. Still, come out of a slow corner with enough throttle and the front end will gladly reach for the sky. The second gripe goes back to the usual reduction of features that standards suffer from, though I’m not that concerned as it comes with a corresponding discount. The RS is equipped with an IMU and a quickshifter, but both of those are $199 (each) options on the Tuono. I assume by this point you’re familiar with what a quickshifter does, though I want to take a moment to specifically mention that on the Tuono, the addition of the IMU enables cornering ABS, smarter wheelie control, and tilting functionality in the headlights. Something I found interesting was that both features can be installed later if you don’t order them initially but change your mind after you put some miles on your new bike. A little bit of consumer advice for you: Aprilia’s giving $250 off towards accessories if you pre-book online, so you can get yourself one of the options for free. Our test bikes were only equipped with the quickshifter, but if I was taking one home then I’d get both and cough up the extra $400, which means I’m starting at $10,899. I’d also likely spend $55 for a USB charger, $270 for the tail bag, and a few more bucks to get the flat spot tuned out. And you know what? There’s a good chance I’ll be doing more than writing about what I’d spend, because the Tuono 660 makes an incredible amount of sense for my motorcycling lifestyle: 40 mile round trip commute (mostly highway) each day, fun rides on twisty roads on weekend mornings, the occasional weekend trip, 2-up short jaunts with Vy every few days, and an excellent blend of practicality and fun because I want to have a good time but I don’t have the luxury of hopping in a car if the weather sucks or I have to carry more than I can fit in a backpack.

I still maintain that if I was forced to only own one motorcycle, it’d be a BMW R1250GS (with my budget, a heavily used one). But I’m lucky enough that I can own more than one, and the Tuono is a near-perfect fit for the commuter role in my garage because of the fun, comfort, weight, luggage, and the electronics. It doesn’t get my heart aflutter as much as the RS 660, but the Tuono is close enough and the increased comfort makes it a better overall bike. Maybe I can put Tuono bars on a Lava Red RS 660…?

Three word review: I want one. If you feel the same way, you should be able to snag one for yourself around April 15th at your local Aprilia dealership. One final note: at the RS 660 launch I had some issues with a check engine light and a temperamental quickshifter. To be fair to Aprilia, they warned me those things might happen as I was given a pre-production bike, but it’s still difficult to recommend a bike when it gives you a check engine light all day. Thankfully, the Tuono test bikes were production units and they exhibited no such problems. 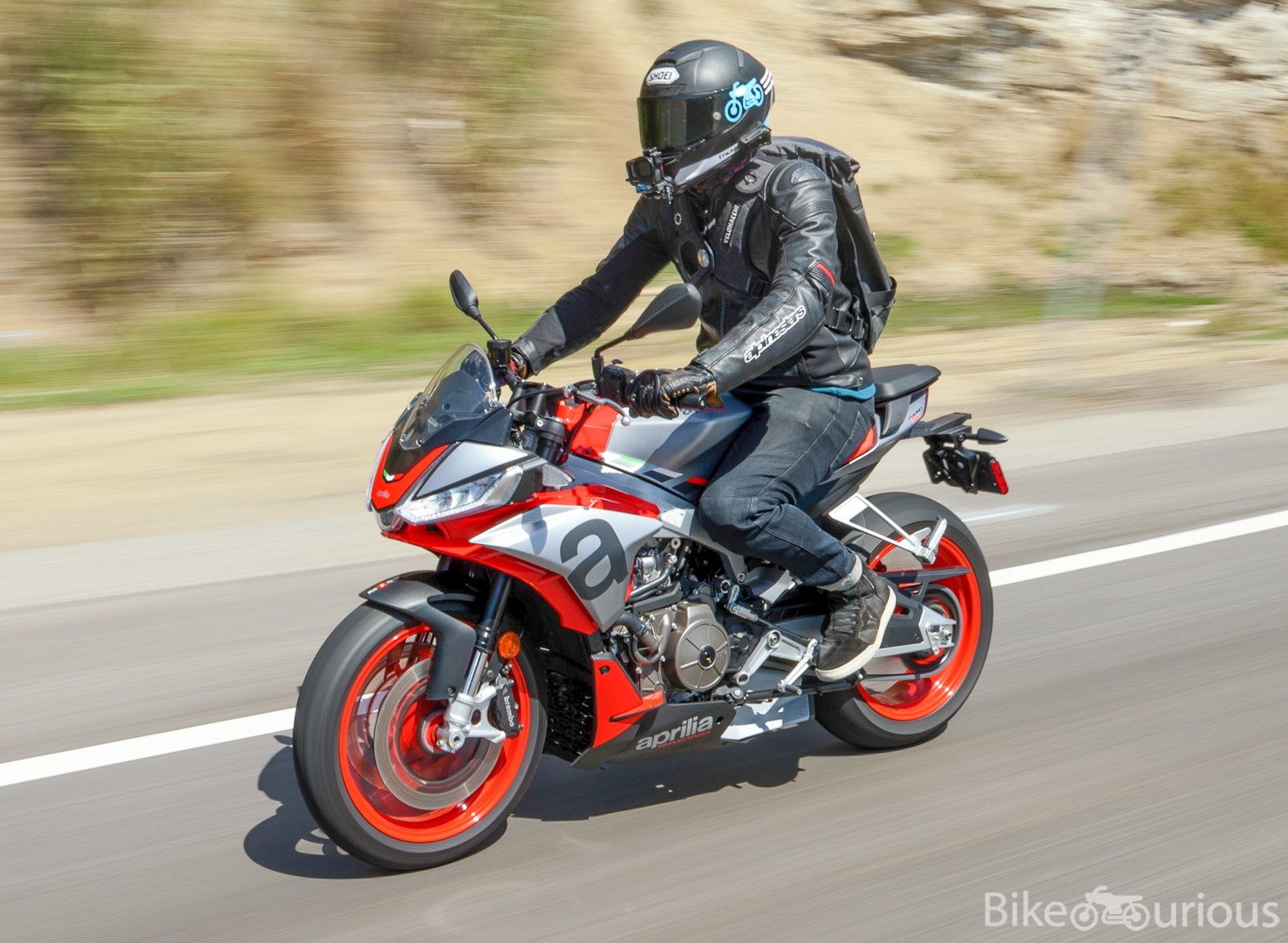